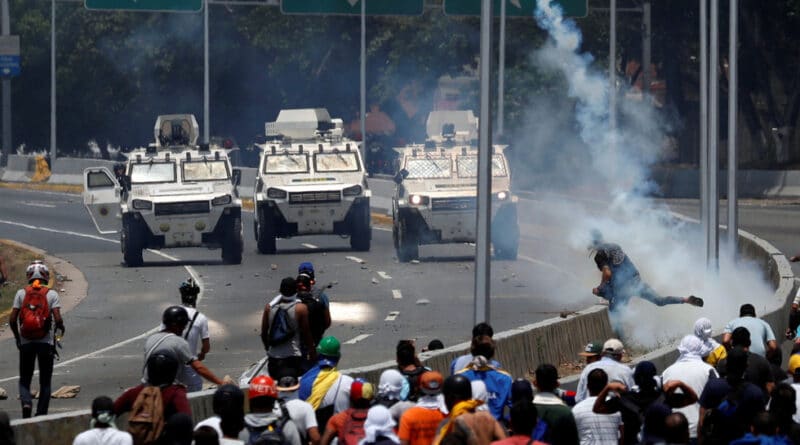 August 4, 2020 .- The Democratic Party’s gripes with President Trump are many, yet the latest may be the most bizarre to date. One Senator argued that Trump’s brash personality bungled a perfectly good, American-style coup in Venezuela.

If Senator Chris Murphy (D-Connecticut) had his way, opposition leader Juan Guaido would be occupying the Presidential Palace in Caracas right now, after the successful ousting of Venezuelan President Nicolas Maduro. Despite the weight the US threw behind Guaido last year, the young upstart’s planned coup was a failure, and Murphy blames Trump for that loss.

Short story – it’s been a case study in diplomatic malpractice, and I want to tell you the quick story of how Trump’s bungling has empowered a brutal dictator.

As the Senate Foreign Relations Committee held a hearing on the debacle on Tuesday, Murphy laid out his list of complaints against the coup-bungler-in-chief.

3/ The winning play was right in front of us – bring together all of Latin America behind a transition or new, free elections, and take the time to work with or neutralize Maduro’s patrons (Russia, Cuba, and to a lesser extent China).

First, Trump failed to persuade Russia, Cuba, and China to abandon Maduro. Regarding Russia, Murphy claimed the President was “wrapped around” Vladimir Putin’s finger, and on China, Murphy scolded Trump for prioritizing US trade issues over interventionist adventures abroad.

4/ But Trump couldn’t talk to Cuba (bc Obama), Putin had Trump wrapped around his finger, and all Trump wanted to talk to China about was the trade deal. So we made no meaningful effort to move them, and all three stood solidly behind Maduro.

What followed, Murphy said, was a “running comedy of errors,” from agitating for a failed uprising last April without securing military support for Guaido, to appointing open regime-change enthusiast Elliott Abrams as envoy to Venezuela, to having former national security advisor John Bolton issue vague threats of war at the Latin American country.

All valid points for any would-be coup plotter to bear in mind. Yet hearing Trump criticized by a Democrat for failing to overthrow a foreign leader by the book is a strange new development in the party’s ‘Orange Man Bad’ rhetoric.

Murphy was “furious” that America under Trump lost its “natural right” to control who governs Venezuela, journalist Glenn Greenwald remarked.

America lost the ability to control who governs Venezuela — the natural right of the United States to do — and @ChrisMurphyCT is furious about it. https://t.co/rKcD3GFIW2

Socialist commentator Tom Wojcik quipped that Democrats under Biden will “aggressively prioritize and more competently mount another VZ coup,” all in the name of rewriting the legacy of Trump.

Last thing I’ll say, Democrats will aggressively prioritize and more competently mount another VZ coup under Biden because they believe a successful Venezuelan coup will be, amongst other things, a refutiation of Trump. https://t.co/GVZ28gJnBy

Fuck this guy, and the worldview that offers this as an antidote to Trumpism. https://t.co/9llDdM0xW2

What Murphy’s thread illustrates, leftist journalist Ben Norton commented, is that the coup attempt in Venezuela was “bipartisan.” At least “this ‘progressive’ imperialist Democrat is being honest,” Norton quipped.

Trump’s unsuccessful foray into regime change in Venezuela marked a departure from his campaign-trail promise to withdraw the US from foreign conflicts and “regime-change wars” and put “America First.” Trump has since sacked Bolton and switched his focus from Venezuela to domestic concerns, as well as the ongoing economic conflict with China and occasional flare-ups in tensions with Iran.

In Caracas, Maduro remains in power, much to the chagrin of Murphy and the lawmakers on both sides of the aisle who thought they had a golden ticket in Guaido last year.

Guaido himself, along with a host of opposition politicians, has pledged to boycott Venezuela’s parliamentary elections in December, claiming Maduro will carry out “electoral fraud” to keep his party in power.