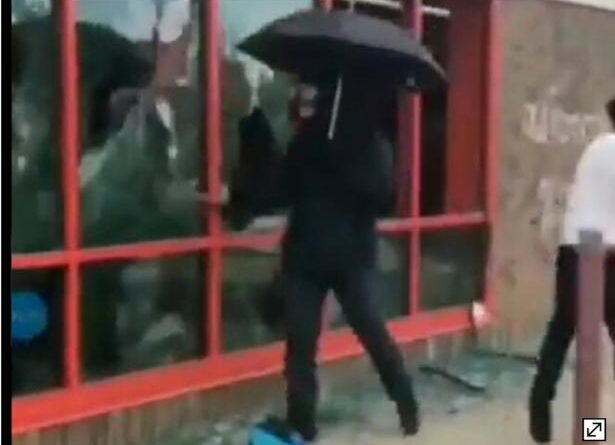 A masked man who was seen in a viral video smashing the windows of a south Minneapolis auto parts store during the George Floyd protests, earning him the moniker “Umbrella Man,” is suspected of ties with a white supremacist group and sought to incite racial tension, police said.

A Minneapolis police arson investigator said the act of vandalism at the AutoZone on E. Lake Street helped spark a chain reaction that led to days of looting and rioting. The store was among dozens of buildings across the city that burned to the ground in the days that followed.

“This was the first fire that set off a string of fires and looting throughout the precinct and the rest of the city,” Sgt. Erika Christensen wrote in a search warrant affidavit filed in court this week. “Until the actions of the person your affiant has been calling ‘Umbrella Man,’ the protests had been relatively peaceful. The actions of this person created an atmosphere of hostility and tension. Your affiant believes that this individual’s sole aim was to incite violence.”

Police identified “Umbrella Man” thanks to a tip that came via e-mail last week, Christensen said.

The Star Tribune could not independently verify the police account, which has so far only surfaced in the search warrant, and isn’t naming the man because so far he has not been charged with a crime. The man, who has a criminal history that includes convictions of domestic violence and assault, did not respond to messages seeking comment. Spokespersons for the Minneapolis Police Department and the Bureau of Alcohol, Tobacco, Firearms and Explosives, which is also involved in the investigation, declined to comment.

RELATED CONTENT: US Police Continue to Crack Down on Protesters

Floyd’s death under the knee of a since-fired police officer set off protests that spread around the world and stirred widespread reckoning over racial injustice. Derek Chauvin is charged with second-degree murder and manslaughter, and three of his former colleagues also at the scene, J. Alexander Kueng, Thomas Lane and Tou Thao, have been charged with aiding and abetting Chauvin.

Rioters set fire to the AutoZone near Lake Street and 27th Ave. S. on May 27.

At least two people died in the subsequent riots, which eventually spread as far as north Minneapolis and South St. Paul, and caused roughly $500 million in damage. Authorities have since charged a handful of people with arson-related crimes.

A widely shared livestream video from May 27 — two days after Floyd’s death — showed the man walking casually along the front of the former site of AutoZone at E. Lake Street and Minnehaha, breaking out its windows with a 4-pound sledgehammer, prompting some protesters to confront him and demand that he stop. Before that, police say, the man, clad head to toe in black and carrying a black umbrella, had spray-painted “free [expletive] for everyone zone” on the double front doors.

At the time, activists seized on the footage as proof that outside “provocateurs” were trying to derail what had been a mostly peaceful demonstration. But others on social media pointed out that at least some looting had gone on before the video surfaced.

Christensen wrote in the affidavit that she watched “innumerable hours” of videos on social media platforms to try to identify “Umbrella Man,” to no avail. Investigators finally caught a break when a tipster e-mailed the MPD identifying him as a member of the Hells Angels biker gang who “wanted to sow discord and racial unrest by breaking out the windows and writing what he did on the double red doors,” she wrote.

Police have also connected the 32-year-old man to a widely publicized incident in Stillwater late last month, in which a Muslim woman was confronted by men wearing white supremacist garb.

RELATED CONTENT: “Defendant Shall Not Attend Protests”: In Portland, Getting Out of Jail Requires Relinquishing Constitutional Rights

A subsequent investigation revealed the man was also an associate of the Aryan Cowboy Brotherhood, a small white supremacist prison and street gang based primarily in Minnesota and Kentucky. Several of its members were also present at the Stillwater incident.

Andy Shoemaker, a former St. Paul police officer who has investigated criminal motorcycle gangs, said the Aryan Cowboys are relatively new with loyalties to the Hells Angels, who operate across the state.

“They’re another group that’s basically a farm system, a minor league for the Hells Angels,” he said, adding the Angels occasionally recruit members from some of these offshoot clubs.

The weeks that followed Floyd’s death brought dozens of reports of racially motivated assaults against minorities and minority-owned businesses.

Leaked intelligence briefings show that federal authorities were monitoring the movements and online activity of white nationalists and other extremist groups that descended on the city during the riots. The president of the Hells Angels summoned 75 members of the Aryan Cowboy Brotherhood to the help protect the club’s headquarters in north Minneapolis, according to an intelligence memo, which surfaced in June as part of a massive trove of leaked law enforcement documents dubbed “Blue Leaks.” A club member later posted a warning to protesters on Facebook saying that while the Angels agreed with the anti-law enforcement message, any protests that reached the clubhouse or “any of our neighborhoods” would be “met with a very unfriendly welcome party.”

Another leaked memo suggested that local biker gangs were taking advantage of the unrest to step up their drug trafficking in the metro area, and that bikers “associated with white racially motivated violent extremists” had discussed inciting riots while posing as members of the anti-fascist group Antifa. It wasn’t immediately clear from the leaked materials whether any of these threats materialized.

After the protests began, footage of “Umbrella Man” roared around social media, prompting speculation about the man’s identity. One persistent rumor argued “Umbrella Man” was an undercover St. Paul police officer seeking to incite violence, a claim apparently based on a tweet citing information from a woman who claimed to have once been married to the officer.

In response, St. Paul police released time-stamped surveillance videos showing that the officer was in St. Paul at the time of the incident, and Police Chief Todd Axtell released a statement scolding social media users for spreading misinformation that could “jeopardize the officer’s reputation and safety and chip away at the trust this police department has worked so hard to build with its community.”

Justin Terrell, executive director of the Council for Minnesotans of African Heritage, said conversations around Floyd’s death and the ensuing riots are important, but they often fail to account for the persistence of structural racism.

“I think at the end of the day, we need to start dealing with those issues, because I think this ‘Umbrella Man,’ he is a rotten piece of fruit at the farthest branch of the tree, [but] we’ve gotta get to the roots,” Terrell said. “I think we have to do the work to get there, which America has never done, and Minnesota sure hasn’t.”

Libor Jany is the Minneapolis crime reporter for the Star Tribune. He joined the newspaper in 2013, after stints in newsrooms in Connecticut, New Jersey, California and Mississippi. He spent his first year working out of the paper’s Washington County bureau, focusing on transportation and education issues, before moving to the Dakota County team.
libor.jany@startribune.com 612-673-4064 Twitter: StribJany

Featured image:  A still from a video shows a man with an umbrella and gas mask breaking windows at the AutoZone on Lake Street during protests in the wake of George Floyd’s death, Twitter/Javier Morillo