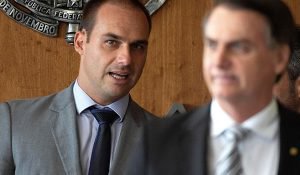 The plans of Bolsonaro Jr.

Eduardo Bolsonaro, a Brazilian congressman and son of the president of the ultra-right-wing elected, said what will be the projects he will promote from his bench and the country proposal that he will defend from his place in the convulsed Lower House of Brazil. “If it were necessary to arrest 100 thousand people, what is the problem?” Affirmed the public defender of torture regarding the need to criminalize social movements in the country, such as the Landless Movement. In an interview with the newspaper Estadao listed the bills that he will promote: the end of sexual education programs, which he considered “indoctrinary”, the construction of more prisons and the project “School without a party”, in addition to conservative reforms announced by your father.

The right-wing ran the possibility that opposition political parties were considered illegal and dismissed the fact that this decision generated frictions with the principles of freedom established in the Constitution. “It is a proposal that I would like to see prospered, but that depends on the renewal of the National Congress. It is to follow the example of democratic countries, such as Poland, which has already suffered on the skin what communism is, “he said, after comparing communism with prostate cancer.

Before Jair Bolsonaro came forward as a candidate, Eduardo had already brought charges against him for inciting torture from social networks. During the campaign he published a picture of a man dying with a plastic bag under the legend “# EleNão”, the slogan that motivated the massive mobilizations against the then candidate.

“One of the roles of parliamentarians is to make people aware. They have atypical attributions. And they have to use their position to be a representative of a part of society to talk about the dangers of communism. Just as I talk about prostate cancer. “, He stressed during these days in the interview with the Brazilian portal.

“What happens today is that groups like the MST sometimes use their criminal power to invade land, set fire to tractors to force the farmer to sell their land at a price below the market. They impose terror to earn a profit on the other hand. It’s what people try to fight. That is terrorism. It is the intention to bring terror to intimidate people. If it were necessary to arrest 100 thousand people, what is the problem in that? I don’t see a problem in leaving a hundred thousand people with this type of position, who believe that the invasion of land is something normal, free to commit their crimes. This is my main fear. I want to make life difficult for these people, “said the most voted member of Brazilian history, criticized for his homophobia, xenophobia and antidemocratic behavior.

When talking about himself, Eduardo says that he is a federal police officer with a postgraduate degree in liberal economics who likes geopolitics and international law. When asked what his objective is, he talks about the need to hold a “Sao Paulo Forum” but on the right, which includes both Italian far-right minister Matteo Salvini and Steve Bannon, the mastermind behind the Donald Trump campaign. and many of its most controversial initiatives. “I want to take advantage of this conservative wave to give an answer to the Forum of Sao Paulo,” he confessed. For the deputy, “people want to have an international connection for the exchange of ideas.” It would be a think tank “in which measures are considered that can be imported and transferred from those countries”.

In terms of international politics, he also gave his approval to the intervention of Venezuela because there, he said, “besides communism, they have Hezbollah and drug trafficking.”

In addition, he confirmed that during the government of his father will stop promoting educational programs with gender content. “Do you think it is important to get your job to talk about machismo and feminism? That does not contribute at all. You can have debates, not imposing a single vision at the academic level, “he said. On the contrary, the legislator vindicates military schools. “The great success today are the schools militarized by the PM. Goiás reaches 40 and Manaus has nine, and there is a line of hundreds of parents to get a place there. What is needed today at school is to have discipline, “he said.