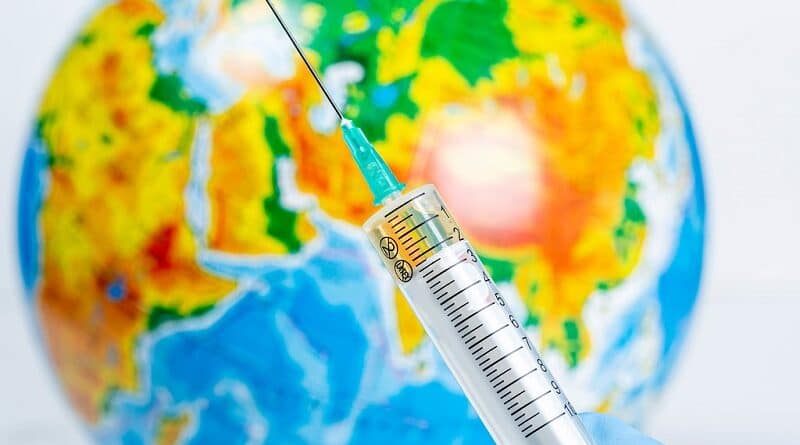 The head of the Russian Direct Investment Fund (RDIF) warned last week that the world is at risk of being further divided by the forthcoming COVID-19 vaccines that leading Great Powers are expected to publicly unveil in the coming future, which would make the vaccine race the next phase of the COVID World Order that’s quickly changing life as everyone knows it, including International Relations.

The planet is in the midst of what the author previously referred to as World War C, which is his neologism for the full-spectrum paradigm-changing processes that were catalyzed as a result of the COVID-19 outbreak and the global community’s uncoordinated efforts to contain it. This is part of what he also earlier called the COVID World Order, which specifically relates to the everyday changes brought about by this development but which are also quickly making their impact felt in the sphere of International Relations as World War C continues.

The latest escalation in this unconventional competition between states occurred last week when Canada, the UK, and the US accused Russian hackers of trying to steal information about a British vaccine, a charge that Moscow promptly denied. The day after, the head of the Russian Direct Investment Fund (RDIF), Kirill Dmitriev, warned the Financial Times in an exclusive interview that the world is at risk of being further divided by the forthcoming COVID-19 vaccines that leading Great Powers are expected to unveil in the coming future.

This would in effect make the vaccine race the next phase of the COVID World Order as countries scramble to carve out exclusive markets for what’s being presented as their life-saving product. It’s neither here nor there how anyone personally feels about vaccines or even the reported lethality of COVID-19 since it should be objectively recognized that this epidemiological situation has already been politicized and is being resultantly instrumentalized for grand strategic purposes.

To be clear, the author believes that COVID-19 is real, it’s lethal for certain at-risk members of the population, and is reportedly highly contagious. He also recommends that the reader use their personal discretion in deciding which guidelines to apply to protect themselves, their families, and everyone else in society. Still, this doesn’t mean that governments aren’t fearmongering about COVID-19 in order to expand their powers at home and abroad since that’s precisely the case when it comes to the latest accusations against Russia.

On the surface, the claims are predictable enough since they correspond with the Mainstream Media’s narrative about the so-called “Russian threat” that’s supposedly lurking behind every corner just waiting to undermine the West at each turn. Accusing Russia of trying to steal vaccine information makes sense from their perspective since many of their people are already scared to death of this disease and it thus serves their governments’ interests to make it seem like Russia is somehow trying to sabotage their inoculation efforts.

There might be a more nefarious motive behind all of this than just attempting to ruin Russia’s international reputation, however, since the country’s rivals are likely thinking a few steps ahead as usual. Firstly, they aim to protect their own reputations at home and abroad since they’ll understandably be embarrassed if the same country that they tried to convince everyone else was “backwards” and “isolated” ends up releasing a COVID-19 vaccine before they do. Saying that Russia stole it helps them “save face” a bit.

Secondly, peddling this false narrative could create the basis to sanction those countries that buy Russia’s forthcoming vaccine or receive it free of charge as humanitarian aid. The US and its allies can claim that they’re receiving something that was produced with stolen trade secrets and that they should instead buy “the real thing” from them. If those states don’t comply, then their citizens might be banned from traveling to Canada, the UK, and/or the US if those governments claim that Russia’s vaccine “doesn’t work” or “isn’t reliable”.

To put it another way, the Western countries can implement blanket travel bans on the basis that they can’t be certain that foreign guests are inoculated against COVID-19 unless they receive one of their or their allies’ vaccines. Considering how much more closely connected most of the world is to the Western economies as opposed to Russia’s, this might be sufficient enough of a threat to force their governments to comply under pane of suffering unacceptable economic damage if trade is predictably affected as a result of these bans.

Looking ahead, this strategy might be experimented with against Russia in order to gauge its success prior to modifying it for use against China. The challenge there, however, is much more formidable since many countries nowadays are even more closely connected to China than they are to the West so such pressure tactics would amount to a de-facto ultimatum forcing their governments to take a clear side in World War C. It’s unclear how many of them will go with the West, but there’s a credible enough chance that some of them will.

RELATED CONTENT: World can Show how Pharma Monopolies Aren’t the Only way to Fight COVID-19

Even so, the soft power victory might just be superficial since China is unlikely to make its own similar ultimatum. The People’s Republic probably won’t ban travelers who weren’t inoculated with a Chinese vaccine so the citizens of those countries that feel pressured to choose Western ones for the previously mentioned reasons can still trade with the world’s second superpower without any problems. If Western vaccines are proven to be ineffective and/or dangerous, however, then that policy might of course change.

Returning back to the overarching theme of this analysis, the COVID World Order’s vaccine race, it might very well be a fait accompli that people the world over will be compelled to receive some sort of vaccine in order to travel or even use basic services in their home country. This might especially be the case with the more desperate masses of the “Global South” who could be exploited as guinea pigs by some of the leading Great Powers in order to test the safety of these vaccines in exchange for humanitarian aid and preferential trade.

However it plays out, the global masses should expect the widespread proliferation of COVID-19 vaccines within the next year. This is no longer only an issue of public health, but is now a geopolitical instrument of power for various governments to wield against one another and their own citizens alike. The epidemic has been politicized and there’s no going back to the innocent assumption that the world might work together “for the common good” to fight this disease. That was never true to begin with, and forthcoming events will prove it.