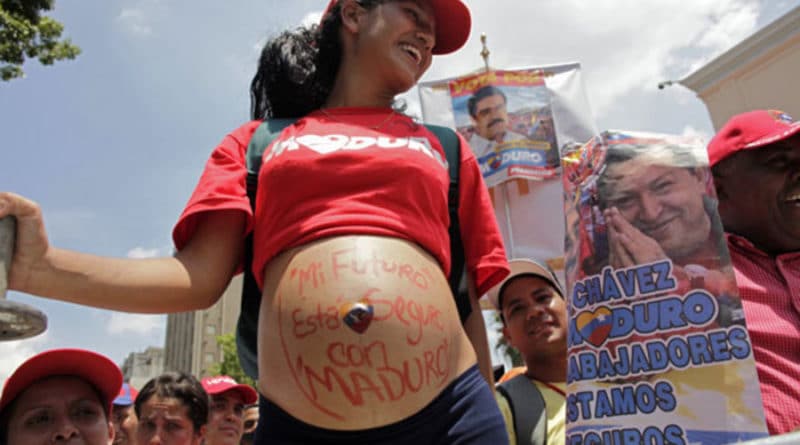 In the middle of the year, we Venezuelans received a visit from the UN High Commissioner for Human Rights, Michel Bachelet, on the occasion of meeting with the different political actors in the country to “evaluate” the complex economic and social environment brought about by the White House’s decision.

We all know the shameful end of the report’s story. Another instrument, lacking in rigour, which provided arguments for the officialization of the economic embargo against Venezuela applied on August 5. The document uses biased statements to impose as truth a state of general chaos, where the government of Nicolas Maduro is continuously singled out, and conversely, US sanctions are barely mentioned.

The media, following the tradition of selling the most outrageous versions of a false narrative, assured that Bachelet’s assessment showed that Venezuelan women were exchanging “sex for food”. A rustic attempt to take advantage of the sexual violence against women, implicit in the cultural system of capitalism, to overdimension it in Venezuela and inflate the record against the Bolivarian Republic.

Although this scenario does not occur with the level of humanitarian disaster that “human rights defenders” subordinate to Washington crave, their conclusions are not brought to light either. In fact, it would be normal for it to occur as another consequence of the aggressive attack on Venezuela’s economic stability.

If we review the map of global conflicts in which the United States has intervened, through mechanisms of financial suffocation, to force the scenario in favour of its geostrategic interests, we will easily detect poor women and their children among the most vulnerable groups.

RELATED CONTENT: “If a Colombian child raises his voice like Greta does, they send for him to be killed” (Interview)

Economic sanctions have a direct impact on women, insofar as they aggravate the social welfare of the territory under attack. There is a pattern in the more than 20 countries that are on the Treasury Department’s blacklist: as national industries became more precarious, as was the case with the textile factories in Yugoslavia or Burma, women, who are traditionally employed in this sector, were cut off from their economic revenue. For example, following the US measures against Burmese imports, 180,000 jobs were lost, most of them held by women.

In a report on the impact of sanctions on Haiti during the 1990s, the independent UN consultant Elizabeth Gibbons illustrates how it affected women, who represented 80 per cent of workers in the assembly industry, rendered inoperative by the export embargo.

In such contexts, with national institutions weakened or embroiled in military conflict, the fate of women can seldom escape violence and prostitution.

Did Bachelet want, by force of word and by order of the financial power, to project the horizon of the Venezuelan women regarding the uneasiness that women suffer in other parts of the world? Is her “sorority” that flexible?

Why we are still standing

We, the Venezuelan women who decided to merge the condition of woman and Chavista in a single journey, have had to overcome strange contradictions with regard to Chavista men, at the pace imposed by the war. This is not a matter of superiority, but rather of the very composition of the poor Venezuelan family that we have had for several decades.

In this country, the mother is the center that brings together the working class, and the links between them have woven a network of resistance in the most violent times of capitalism. A phenomenon that we can identify in our own testimony, the memories of the older generations and the experiences of those of us who frequent them.

Who doesn’t have a story of the grandmother who raised six, eight, ten children, helped raise the children of her friend, and had time to teach her grandchildren and great-grandchildren? One of those who assumed the care of the offspring as her fundamental task in the land where they lived. Although the aseptic and trivial dynamics of modernity made us renounce this past, we all originated from there and some of that fact remains in our bodies.

Suddenly, after five years of continuous financial aggressions, guarimbas and war threats, we are forced to abandon the customs of the middle class and their speeches of isolated families, to retake the protection of the general welfare of the country, with the responsibility that this implies.

To the disappointment of some sectarian groups, every day we resist the impulse of odious discussions and nonsense against the opposite sex, so fashionable today, prioritizing the urgency of attending to a country attacked by a common enemy. It would have been an uphill battle to form more than 30,000 CLAP organizations if the women of Chavismo had taken a confrontational attitude towards their class brother.

What are we at the end of this decade?

For three years we have been experimenting with one of the organizational forms that best express the will of the poor Venezuelan woman to resolve the economic difficulties of the community as if they were her own home. In March 2017, during a speech in the state of Yaracuy, Nicolás Maduro stated the significant fact that 73% of the street leaders who make up the CLAPs are women.

Most of them are grandmothers and adult mothers, accompanied by male volunteers, who are in charge of making an inventory of the supplies that the Venezuelan State provides, not only food to homes and schools, but also medicines, water and domestic gas to be distributed among the family groups that require it.

Young women, who are more likely to fall into the distractions of consumerism 2.0, are concentrated in platforms such as Somos Venezuela, which channels social services from the innovative technological tool of the Carnet de la Patria, implemented by Venezuelan institutions to circumvent the blockade and eliminate the bureaucratic processes within the social missions.

In view of the insinuations of military invasion, we added to our agenda the integration of the Bolivarian Militia, a component of the Armed Forces that already has 3.3 million militiamen.

For the government, we are a fundamental pillar in the endurance of Venezuelan families, in the face of a hostile destiny that will continue as long as the decisions of the executive branch are oriented towards building spaces for the habitat of the People’s Power.

For the current administration in the United States, we are a threat worthy of being eliminated with exclusive economic sanctions. They never tire of repeating that with their suffocation, they are pressing for the exit of Nicolás Maduro, even though we have the marks on our necks.

Two personal stories for an ending

I lost count of the times I went to eat empanadas this year at Mrs. Ana’s house, always accompanied by moringa tea. At least twice she had the branches of the bush cut down, December comes and it goes over the roof again.

At her table sat UBCH chiefs, street leaders, Somos Venezuela brigadistas, Cuban doctors, Chavistas of all sizes and backgrounds, not just from Maturin, and the occasional emaciated individual. Only a master chef knows how to stretch out a lentil stew with rice without it getting boring or tasting bad.

A room can be transformed into a health module if the conditions of the neighbours require it. She will make assessments, look for medicines and recommend specialists at the Comprehensive Diagnostic Centers without charging a consultation fee.

This woman lends her home as she lends her energy. She has attended three courses on baking, given by INCES and held in the ovens of her own kitchen, because she cannot stay static in the spaces that separate one delivery of CLAP food box from the other.

On the other hand, I also lost count of the days I have passed without talking to my sister Olga. and without hugging her two little daughters, who are mine by right of upbringing. She belonged to the same organized group in which Mrs. Ana acts.

Olga decided to leave for Colombia in the middle of the year; not two months had passed when she was ready to say goodbye. She left, I deduced, because she suffered from the absence of the girls’ father, from his lack of affection for the family. Also because during her last days her own savings were significantly reduced, although there was never a lack of bread or company.

That small tribe travelled to the north of the Cauca, a mountainous land where illicit coca plantations and paramilitaries abound. The network we weaved was unable to hold them back.

These are two different circumstances impacted by the same war conditions that the country is going through. From small victories or defeats, we Venezuelans have a collection of ballads to share. However, none of these stories, no matter how proud or sad they make us, will survive the passage of time.

What survives is the extraordinary fact that we achieved with the sum of our collective effort: to overcome, under permanent resistance, another year in the geopolitical dispute of the United States against the world, which has Venezuela as one of its principal foci.