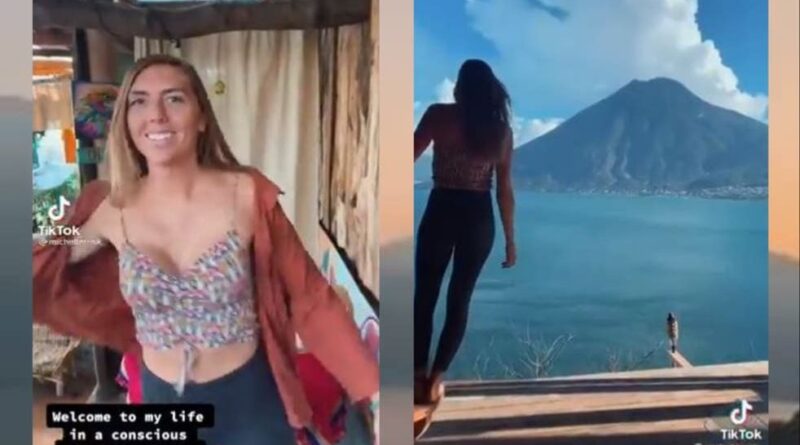 Social networks were in turmoil after a TikTok video arose promoting a neo-colonial project of gentrification in Guatemala.

Even if the COVID-19 lockdowns have reduced the amount of air travel, this hasn’t stopped companies in the tourist sector from taking advantage of low demand to cheapen their resort prices. Although drawing in more customers during a downturn does benefit local communities to some extent, the winners are still the hotel and tour complex owners, where the famous “trickle down economics,” of course, do not trickle down profits to workers, but instead leave wealth concentrated in the hands of a few people.

Yet, the publicity continues, with pictures of white sand, spectacular sun, clear skies, deep blue sea, women in bikinis tanning, and men enjoying the breeze and sunshine, resting by the water. As the ads insist, there’s nothing like walking barefoot on wooden floors on a restaurant’s open terrace, enjoying seafood, a cold drink, having fun at a bonfire at night, returning to your room to sleep and waking up next day to have breakfast and then do some cultural or recreational activity.

But this description comes in a combo with another phenomenon, courtesy of our good old friend capitalism: gentrification. This phenomenon could be defined as “the occupation of former working-class neighborhoods and devalued industrial areas [originally relating to] central London by the ‘Gentry’ social class, the landed aristocracy and the bourgeoisie, by what has been termed as ‘gentrification’ or ‘elitization.’”

With the coming of the age of social networks, an eco-friendly conscience, remnants of the progressive thought of the 1960s, and a conscience influenced by philosophical currents such as postmodernism, etc., we have a breeding ground for youth from affluent social strata who then decide to tour and visit the wonders of nature in “sustainable” environments. This often leads precisely to justifying processes of gentrification in entire populations while doing so.

This recently happened on social networks with the TikTok videos posted by Michelle Rusk, a young woman who has built her online presence based on videos that function as promotions for such projects.

In her videos, with upbeat “tropical” music, Michelle invites us to know her life in a “conscious community in the Guatemalan mountains.”

In another video, she explains further the activities in this piece of paradise and her role in it:

“how many different cultural activities can we steal, do badly, and fit into one video?” pic.twitter.com/lCFOqsJu8J

The activities Michelle describes, although they sound like fun, are nothing more than different cultural elements thrown together in a blender to present a caricature of what a “tribal” experience looks like according to the stereotypes capitalism and imperialism have taught us for decades. In Michelle’s videos, just one Brown person appears, a Guatemalan woman offering her a plate of fruits when she mentions “healthy foods.”

The rest of the people appearing in her TikTok videos are, like her, white; not a single Brown or indigenous person (like the majority of the population in Latin America), but people who appear to be from the United States or Europe. They have blonde or auburn hair, men have thick beards and long hair in man-buns. Some of the women even have dreadlocks, with sweatpants for their yoga sessions and hippie events around bonfires under the moonlight. It’s the archetype of the middle-class hipster.

What is Tribal Village?
Because nothing screams “welcome to Guatemala” like doing yoga, meditating and practicing aerial silks, we must also not forget the very “Guatemalan” practice of Qi Gong, with Tao breathing and Taichi sessions. Because cultural appropriation also works the other way around, when people present an experience in a country and then put forth activities that have nothing to do with the historical cultural identity of the region.

The resort in question that Michelle promotes is called “Tribal Village,” located on the shores of Lake Atitlán, near the namesake volcano and between the villages of San Marcos and San Pablo. On its website, Tribal Village claims that, “We are learning as a community to evolve as a Soul group. We are practicing and experimenting new ways to take a decision, to relate and organize life here. We are adept at Agile Flow Philosophy and Dynamic Equity. We are recreating step by step the Garden of Eden of the New Earth. And it goes way beyond the flowers and trees we can see. It is multidimensionally alive.” This is just from its first section about having “conscious sustainable living.”

In another section titled “Empowering Education & Art for All,” Tribal Village says that they are “A Sacred School. It is a Vortex blending both ancient traditions and New Earth practices. Some of the most passionate teachers come here, to share their knowledge and support Healing for All, during workshops and retreats. The Art of CODREAMING [sic] together is our song. We do appreciate Beauty and Grace, and everything happening here resonates with the True Frequency of the Heart.”

They also talk about having a  “Personal and collective Healing (Physical, Emotional, Mental, Spiritual).” “We are all Healers. Re-aligning with your True Self is what makes you a healer. We are all interconnected and entangled, we belong to the same Web of Life. It is time to Heal all together, collective wounds and personal traumas. All our activities here support all-encompassing healing, on the physical, emotional, mental and spiritual level.” One might wonder what the people who wrote this consumed beforehand, although given the fact that most of them seem to adhere to the “New Age” ideas, it would not be hard to guess.

What is interesting is that after all this, Tribal Village’s website links to a business plan of BrainHive Consulting, a firm that helps startup projects grow. This can only mean that at one point, someone had the brilliant idea of combining the fantasies of their “woke” friends to make their “village” in a far-off place, and to fulfill this project, they went over to BrainHive Consulting to help them develop a business plan that resulted in this retreat center.

The website does not offer much detail about the people in charge. Four people are listed, all of them white (of course), one of whom is an Argentinian, and all of whom are referred to as “masters.” Furthermore, the website is exclusively in English, something contradictory from a project that claims to “have a positive impact on the local community” and aims to “integrate the local community in our projects” by “care[ing] about our impact on our neighbors,” who just so happen to live in a Spanish-speaking country.

Tribal Village Precaritizes its Workers
Tribal Village’s thinly-veiled exploitation is not as comfortable as Michelle’s Tik-Tok videos suggest. Assuming one would be interested in collaborating with this project of gentrification, you must notify them one month in advance, during which time the coordinators check if the workshop you would be doing is in line with their vision; afterwards, you yourself have to promote your event, since you will receive little assistance from the organization.

Transport near San Marcos and San Pablo is scarce (more on that later), so if the applicant (named “co-creator,” because it would be problematic to admit they’re precarized workers) manages to be accepted, they have to pay for their own flights—nowhere does it say Tribal Village will pay for that part. Once in Guatemala, you can arrange a private shuttle, find a van to drop you off, or organize a carpool through Facebook groups.

If you don’t manage to find any of these options, you can take a half-hour walk between San Marcos and San Pablo to arrive at your destination. Lovely. The stay features rooms shared by up to 10 people or in teepees (yes, teepees!) for up to 8 people, in single or bunk beds, which you have to pay for yourself. The only “benefit” you’d have is that the earnings you get from your workshop are divided between 80% for you and 20% for Tribal Village.

But in exchange, the place “encourages” “self-motivated and solution-oriented mindsets,” especially from the people who “volunteer,” which they openly say like so: “See a dirty dish? Give it a wash. Dirty floor? Grab the broom and give it a sweep.”

Tribal Village is Gentrifying Guatemala
Regarding the community itself, the villages surrounding lake Atitlán have a much harsher reality, just like in many other tourist destinations. Just as in Mexico, with “jewels” such as Puerto Vallarta, Acapulco, Cancún, Playa del Carmen, etc., the surrounding areas contrast with the paradise described by Tribal Village. As recently as 2018, a series of photographs describe what it’s really like to live by lake Atitlán.

Villages are still having their electric energy run through a literal net of cables snaking and entangling through the streets and light posts. Transport is done through vans, given that there are no buses around; this is due to the fact that around lake Atitlán, most of the areas are rural. The situation of poverty in the country means that private vehicles are scarce.

Moreover, environmental impacts have affected these communities. In the 1950s, the largemouth bass was introduced in the lake, which resulted in a whole re-ordering of the aquatic ecosystem. More recently, communities had to face a project that was bound to dispose of its waste in the lake through the Panajachel river; a project that was known locally as the “mega-collector.”

That the Guatemalan government allows these projects of gentrification, which starkly contrast with the poverty around the lake, is another example of the semi-colonial status of the country. Technically, Guatemala, like most Latin American nations, has full sovereignty and political independence, but foreign investment, with projects such as Tribal Village—which benefit more the “masters” with their startups instead of the communities themselves—chain the interests of local capitalists to those of the imperialist bourgeoisie. They in turn try to convince many young people to thinking they’re making a change by connecting with the Earth and liberating their energies, while in reality they’re not doing anything else than providing free publicity through social networks so more people fall into that trap.

On social networks, many who have known the place first-hand agree that the purpose of the resort is to benefit foreign tourists, mostly from the United States and Europe. One Twitter user commented that it’s “the ‘paradise’ of western hippies with money, where the indigenous population of the place have a very clear place: working in precarious conditions for these undesirables.” Others pointed out that Tribal Village looks more like a sort of cult. Although we could not verify how much Tribal Village pays its “co-creators” and volunteers, a quick Google Maps search shows that its address is on a nameless road, surrounded by many hostels. It would not be surprising if it turns out that the land was bought by speculators, as happens in many countries. In many cases, these practices displace the local fauna and speculate the land while popular sectors keep suffering a housing crisis.

In fact, Tribal Village openly admits to this practice in its website, where it claims that they are “running fundraising campaigns to acquire new land around the lake and build accommodations.” In any case, the winners here are not the communities in Lake Atitlán (or Guatemala in general) like Tribal Village says, but the “masters,” consultants and speculators who profit at the expense of the villages with precarious infrastructure, all while European and American tourists enjoy their “exotic” experience.

Featured image: “Welcome to my life in a conscious community.” (Photo courtesy of TikTok)