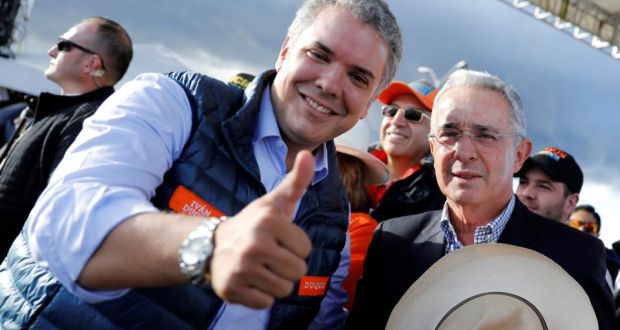 On Saturday, April 3, Venezuelan Foreign Affairs Minister Jorge Arreaza Montserrat advised Colombian president Iván Duque to stop lying about the so-called “Cartel of the Suns” (Cartel de los Soles). He recommended that someone read to him about the rigorous investigation which has revealed that the United States and his own government supported and publicized that lie based on an unprecedented media plot.

“It is known that Iván Duque is not used to reading, but he is used to lying,” Arreaza wrote on his Twitter account, @jaarreaza. “Perhaps someone can read to him this rigorous work by a Spanish researcher, which shows that the alleged “Cartel of the Suns” is nothing more than a media creation to attack Venezuela. Rigor!” he added.

He attached a link to a rigorous work (in Spanish) by the Spanish journalist and analyst Fernando Casado, who in his essay, “The Myth of the Cartel of the Suns,” refuted the existence of any such organization. He provided sufficient evidence for the said drug-trafficking organization being a fictitious construction of imperial mainstream media that only seeks to discredit the legitimate authorities of the Bolivarian government of Venezuela and to justify a foreign intervention to carry out “regime change.”

Published by the publishing house El Perro y la Rana, the Spanish author explained that his new research delves into greater depths and has broadened the scope of his previous work from 2017, when he had published the book, “El Cartel de los Soles. The new invention to attack Venezuela.”

On this occasion, over the course of the investigation, Casado’s main objective was to obtain proof of the existence, precisely, of this “Cartel of the Suns.” “All efforts were made to obtain more information from those sources that claimed to be certain about the existence of evidence or published compromising information,” he asserted.

RELATED CONTENT: The Washington Post’s “Cartel of the Suns” Theory is the Latest Desperate Excuse for Why the Coup Attempt in Venezuela has Failed

With this goal, he contacted the different sources that had reported on this, such as the International Narcotics Control Board (INCB), a supposedly independent body working with the United Nations, which stated in its 2019 report (published in early 2020) that it had evidence of the existence of the “Cartel of the Suns.” He also contacted the organization Insight Crime, which in one of its reports dated 2018 dedicated to Venezuela “claimed to have contacted anonymous sources from the US Department of Justice.” “Its joint director, Jeremy McDermott, granted interviews to an uncountable number of media organizations,” continued Casado, “but in our case, they did not even deign to respond to our emails.”

Finally, he also contacted the Herald Tribune journalist, Antonio María Delgado, who assured that his newspaper had access “to the extradition request of the former Chavista spy chief Hugo Carvajal, a document “of 140 pages with a detailed X-ray of the so-called ‘Cartel of the Suns’.”

Although there was no response from those who might allegedly have evidence of the existence and mode of operation of the “Cartel of the Suns,” Casado’s work demonstrated the evidence of how a lie was created and publicized, especially through the headlines of the media scoundrels who shamelessly fabricated fake news.