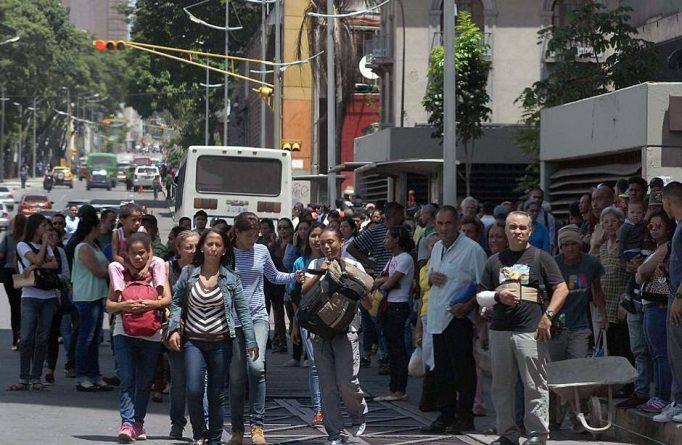 The working people of Caracas do not lose the capacity of amazement before the increasingly creative excuses of the municipal governments and the Capital District [Caracas has several municipalities] that try to justify their inaction in front of the multiple problems that daily afflict us. And it is even more tragic when these issues are not exactly new, but long-standing and even cyclical; with which, the authorities renew the excuses and increase the list of unfulfilled promises.

Thus, the calamitous problem of passenger transport reappears in the subject of concern and discussion in the various lines, already natural, in front of groceries and supermarkets, waiting for the bus or the jeep [jeeps are mostly use to take passengers up to the barrios], and in the tumults of the Caracas Metro.

Once again the illegal increase of the urban and extra-urban passage, whose amount depends on the mood of the collector and the driver; thus the price went from BsS 1 – by order of the President of the Republic, who in the presidential address on October 11, was outraged to know that several lines of transport did not meet this amount – to BsS 2 and now reaches BsS 5, with the intention of taking it to BsS 7 or 10 at the beginning of December. And on extra-urban routes it went from BsS 5 to 12, 15 and up to 20.

The national and municipal governments indicated that they would do another census to make the attention to the transporters more efficient; The Mayor’s Office created a municipal transport company (Caracas Caribe Municipal Transport System SA) in June of this year, and in that same month the mayor said that there have been some “advances in the reordering of routes” and with the “Plan Zero Pirateo” »The private lines would be prevented from continuing not complying the assigned routes.

We imagine that the “advances” are only in the bureaucratic reports, because in the street there continues to be chaos in the transport service, both public and private. From the municipal company we no longer see the Caribbean taxis, motorcycles or buses; and from the other plans there was never more information. As we have denounced, improvisation, lack of official information and accountability on local public policies are aspects that contribute very little to solving the problems of the capital city.

Faced with this chaos, the popular movement must respond in an organized manner and exert the necessary pressure for an effective and efficient response to this problem, which allows us to stand firm against the action of private transport mafias, the inefficiency of the public system and the incompetence of the Mayor’s Office of Caracas.

This issue must be debated in each community space, not to find excuses or romantic justifications about the problem, nor to make letters of lament to the government; concrete instruments of struggle must emerge, such as, for example, Transport Users’ Committees, as mobilization instances that control the specific lines of private transport and public services, and allow planning and executing concrete actions of denunciation and popular pressure.

In addition, this would be an important effort for the reactivation of the Communal Councils, as seed of the Popular Power, which have been in retreat in the last four years, product of improvisation and bureaucratic decisions far removed from the concrete reality. [We would add also as a result of the Economic War and US Sanctions]