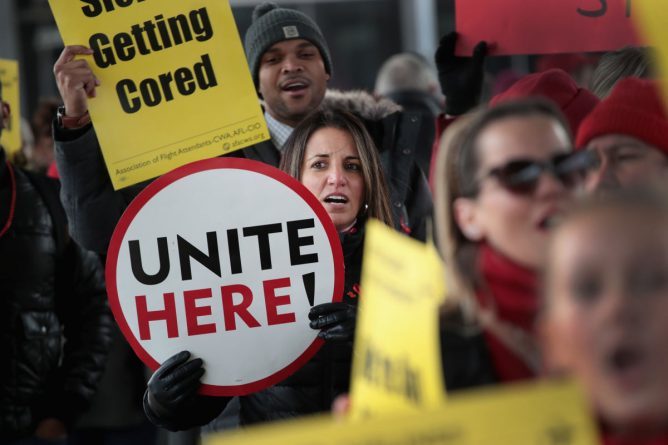 29/Mar/2019.- Flight attendants played a crucial role in forcing an end to the government shutdown. Now the survival of their unions is being quietly threatened by Trump appointees on the National Mediation Board (NMB), an independent agency that was established in 1934 to resolve labor-management disputes in the airline and railroad industries.

Since November 2017, the three-member panel that oversees the NMB has been controlled by Republicans, as the Senate confirmed both of Trump’s nominees, Gerald W. Fauth III and Kyle Fortson. Trump was also required to nominate one Democrat by law and he chose Linda Puchala, an Obama appointee who has served on the NMB since 2009.

The board is currently targeting the Railway Labor Act (RLA). That’s a federal law that was established in 1926 to govern labor disputes in the railroad industry and give workers the right to engage in collective bargaining. Although originally created specifically for railroad workers, it was extended to cover the airline industry in 1936. According to the RLA, any employee who wants to decertify their union must first get signatures from half of the workforce. After the signatures have been obtained, a “straw man” is established to run against the union. Workers then get to vote either for the union, for the straw man, or for no representation at all. The rule is designed to give workers the option to vote for new representation if they have an issue with the direction of the union, as opposed to getting rid of the union altogether.

RELATED CONTENT: Intl Trade Unions Condemn Recognition of Guaidó
In a notice of proposed rulemaking (NPRM) issued on January 31, Fauth and Fortson made it clear that they’re seeking to create a “straightforward election process” and get rid of the strawman rule. Under the new criteria, workers would only be able to vote for the union, vote for no union or write in a vote. This would effectively make it much easier for a worker to decertify their union. Under the new rule, the workforce couldn’t be unionized again for two years, which is an increase to the current one-year ban that comes after decertification.

A Shameless Attack on a Strongly Unionized Sector
The NMB’s move fits into the Trump administration’s consistent pro-employer agenda, but the appointees’ January 31 offensive against the rail and air unions could easily come across as a form of retaliation, whether that was the conscious intention or not.

Flight attendant Sara Nelson — the president of the Association of Flight Attendants-CWA union — publicly called for a general strike on January 20 to end President Trump’s government shutdown. Less than a week later, Trump agreed to endorse a stopgap bill to temporarily open the government back up so that lawmakers could negotiate an appropriations bill to end the shutdown. Nelson’s declaration coincided with a number of airport workers calling in sick because they weren’t being paid. The labor movement had effectively forced the president to act.

Eleven days after Nelson’s momentous declaration, Trump appointees proposed a potential major blow for the airline and railroad industries, introducing a new rule that would make it easier for the union in these industries to be decertified.

“There is no legal authority for this NMB proposal to create a more ‘direct’ decertification process and no groundswell of support among airline employees for a new decertification procedure,” Sara Nelson told Truthout. “Airline employees understand the critical importance of having a contract. There is absolutely no interest expressed by workers to decertify and give up their union contract.”

Nelson also attributed the move to Wall Street pressure on airlines to cut costs and weaken union power in the industry. “The proposal is coming from ideologues who fantasize about weakening labor in the most unionized industry in America,” said Nelson. “This is an absurd waste of time and resources across the board.”

Right-to-Work for the Skies?
The proposed rule came just a couple of months after Trump’s National Labor Relations Board (NLRB) threw out a unionization vote by baggage handlers at a Portland airport, a vote which had been approved by Obama’s NLRB. Republicans on the current board ruled that the votes of contract workers at ABM Onsite Services-West were invalid because the company was connected to air transport and thus their unionization effort shouldn’t have been decided by the NLRB, but the NMB. This also means that baggage handlers and other airport workers fall under the jurisdiction of the RLA, which makes organizing employees a much trickier endeavor. Under the National Labor Relations Act (NLRA), which covers the majority of private sector companies, workers can organize smaller “micro units” while attempting to unionize. Under the RLA, bargaining takes place over a system-wide basis, as opposed to a facility by facility one, and every employee for a given job type gets to vote, even if they work in a different state.

Airport workers have been on the forefront of the Fight for $15 movement and groups like the Service Employees International Union (SEIU) have helped them win notable victories in recent years. Last fall, the Port Authority of New York and New Jersey voted to raise the wages of airport employees to $19 an hour by 2023. Héctor Figueroa is the president of 32BJ SEIU, which launched the organizing campaign back in 2011.

“The proposal is coming from ideologues who fantasize about weakening labor in the most unionized industry in America.”

“The 175,000 property service workers with 32BJ SEIU stand with all our brothers and sisters in labor against President Trump’s relentless attacks on working families,” Figueroa told Truthout in a statement. “Washington seems determined to chip away at good union jobs for regular people while rigging the system to benefit the wealthy few. Our elected leaders should be making it easier, not harder, for workers to join unions and win better benefits, as this would boost our economy and ultimately benefit all of us. We will not let Washington deter us from working to achieve a just and fair society.”

At the same time the NMB looks to make the decertification process in these industries easier, a right-wing Michigan-based think tank is pushing a lawsuit that would essentially make the railroad and airline industries “right to work” and enable employees to refrain from paying any union dues at all.

The plaintiffs in the case of Rizzo-Rupon are Lin Rizzo-Rupon, Noemieo Oliveira and Susan Marshall, all customer service employees for United Airlines. However, their lawsuit was filed by the Mackinac Center for Public Policy, a right-wing think tank and member of the infamous American Legislative Exchange Council. Since the Supreme Court ruled that that nonunion workers can’t be forced to pay union fees last June in Janus v. AFSCME, conservative groups have spearheaded dozens of similar lawsuits to further erode the power of unions. In many ways Rizzo-Rupon is a retread of Serna v. TWU, a 2016 lawsuit that was funded and pushed by the National Right to Work Legal Defense Foundation. The Supreme Court wouldn’t hear the case, but that was before the Janus decision and before Brett Kavanaugh became a justice.

Public comments on the NMB move are being sought through April 1.