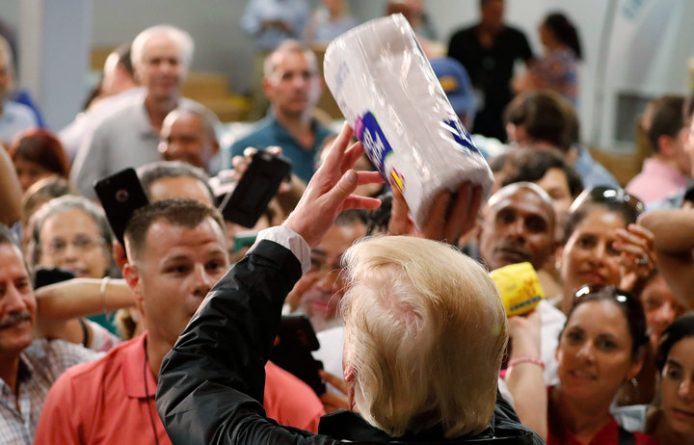 26/Mar/2019.- The opposition of President Donald Trump to allocate more support for disaster relief in Puerto Rico was again evident on Tuesday, when he told his Republican allies at a meeting at the Capitol that the island already received too much funding for reconstruction in comparison with states like Florida and Texas.

The fervent opposition of Trump to allocate additional funds to Puerto Rico is reason for a confrontation with the Democrats in the House of Representatives, who insist that a disaster assistance package between 13 and 14 billion dollars will not be approved for the southern states if it does not include additional aid to Puerto Rico, which was devastated by two hurricanes in 2017.

Florida Senator Marco Rubio said Trump commented to Republicans during a closed-door lunch that aid for Puerto Rico “is very disproportionate compared to what Texas, Florida and others have received.”

Trump does support a $ 600 million agreement to address a lack of food stamps in Puerto Rico that has already led to a reduction in benefits, Rubio said, but opposes the more generous terms of providing funds to rebuild outdated hydraulic systems and make them more resistant to future storms.

The disaster assistance package passed a procedural hurdle with 90 votes in favor and 10 against, and it is expected to be approved in the Senate this week and then pass to the House of Representatives, Democratic majority.

The president of the Budget Appropriations Commission, Democrat Nita Lowey, said that the lower house will insist on allocating more aid to Puerto Rico or the measure will not be approved in Congress.

“Nearly three thousand American lives were lost in the historic storms that devastated Puerto Rico and destroyed its infrastructure, and the island is still struggling to recover,” Lowey said in a joint statement with Democratic Senator Patrick Leahy.

Both Democrats and Republicans support the measure, and it is backed by Trump-like lawmakers like David Perdue of Georgia and Thom Tillis of North Carolina whose states were hit by hurricanes late last year. The measure has been extended so that the states of Iowa and Nebraska, which currently suffer flooding, are eligible to receive assistance for disaster relief.

“Right at a time when the harvest was starting, Hurricane Michael hit and the crops were totally destroyed in almost all of our state,” Perdue explained.

The House of Representatives approved in January a parallel version of the law for 14 thousand 200 million dollars, but was entangled in the dispute over the partial closure of the government and Trump’s demands to build a wall on the border between Mexico and the United States .

The measure is of great interest to legislators in southern states such as Florida, Georgia and North Carolina, who were hit last year by hurricanes Michael and Florence. There is money to pay for the aftermath of an earthquake in Alaska, wildfires in California and floods in South Carolina, and for the ongoing recovery efforts in Puerto Rico.

The US government has been slow to deliver the support to Puerto Rico that Congress has already approved.

“The lack of leadership and coordination, coupled with delays in meeting basic needs on the island, more than 18 months after receiving a presidential disaster declaration, has left too many children and seniors in unhealthy and unsafe conditions, families with homes severely damaged, and communities without adequate infrastructure to maintain a decent quality of life, “said Leahy and Democratic Senate minority leader Chuck Schumer, in a letter addressed to the White House.