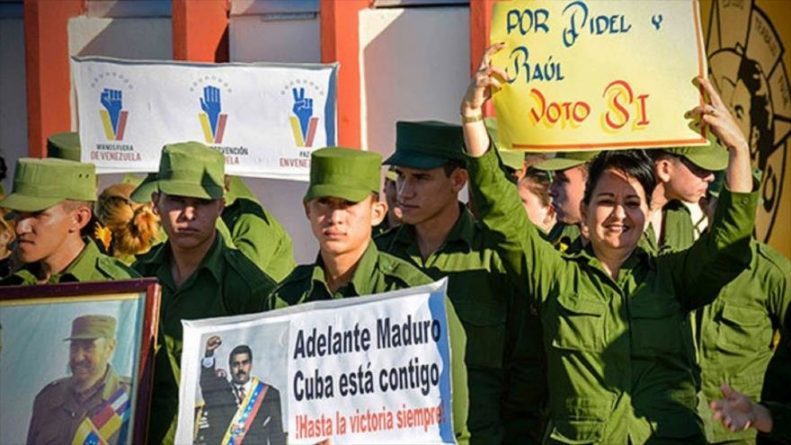 The Cuban Armed Forces expressed their support for the Government of Nicolás Maduro, after the United States threaten a military intervention to Venezuela.

In ceremonies, held this Saturday in different barracks, chiefs, officers, non-commissioned officers, sergeants, soldiers and civilian workers of the Revolutionary Armed Forces (FAR) of Cuba, dressed in military green, have ratified their support to the Venezuelan Executive with their signature on the campaign “Hands out of Venezuela!”

According to the state news agency Agencia Cubana de Noticias , which includes images in this regard, the Cuban military has launched its traditional slogans of “Hasta la Victoria, siempre!” Or “Patria o muerte, conquer!”.

“The US action is interventionist, to attack and invade a country. Only they (Venezuela) are responsible for resolving their internal problems, “said FAR Lieutenant Colonel Ignacio Ariosa, at an event in the city of Matanzas, 83 kilometers east of Havana, the capital.

Lieutenant Colonel Roberto Esquivel, one of the signatories, has emphasized that he and his colleagues in arms support the declaration of the Cuban Government, which is the cause of all the actions undertaken by the United States. in order to destroy the Venezuelan constitutional order.

On Thursday, the Government of Cuba warned that US troops moved into Caribbean territory to prepare an “aggression” and “military adventure” against Venezuela “disguised as humanitarian intervention.”

Despite Maduro’s repeated call to enter into a dialogue with both the opposition and the US, those refuse to sit down at the talks table. US President Donald Trump has said he is weighing a military option in Venezuela .

On Saturday, the president of Cuba, Miguel Diaz-Canel, expressed his solidarity with the Maduro government and demanded that other countries respect sovereignty and peace in the South American country. “Hands out of Venezuela,” the Cuban president has written through his Twitter account.