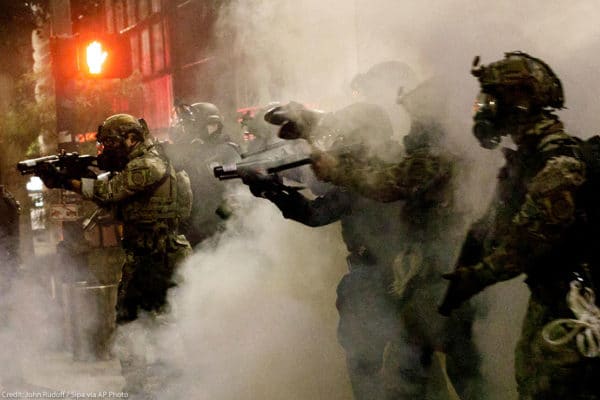 We’re taking the Trump administration to court to block the unconstitutional actions of federal agents in Portland, Oregon.

I’ve been documenting violent and militarized police responses to protests in Portland for more than four years, but nothing prepared me for the unrestrained brutality I’ve witnessed and experienced in recent days.

Night after night, since the police killing of George Floyd, people have been taking to the streets to demand an end to racist policing and a new vision of public safety for our community, one that protects the safety of our Black community members. Police in Portland, who have their own history of killings, have been meeting those demands with violent attempts to silence the protests.

Repeatedly, police have indiscriminately fired tear gas and other munitions into peaceful crowds and have hit journalists and legal observers with batons and flash-bang grenades. This response has been escalating tensions in the community.

A Black-led community organization called Don’t Shoot Portland, in partnership with the Oregon Justice Resource Center and other civil rights advocates first sued and successfully blocked local police from using tear gas. The ACLU of Oregon filed a lawsuit that prohibited police in Portland from dispersing, arresting, threatening to arrest, or directing physical force against journalists or legal observers. Several other lawsuits followed.

While some federal officers had already been in the streets, we now have additional militarized special ops officers occupying the streets of downtown Portland, bent on inflicting pain and terror on people who believe Black Lives Matter.

Federal agents, including those from Trump’s Departments of Homeland Security and Justice, are terrorizing the community, threatening lives, and relentlessly attacking protesters demonstrating against police brutality.

Militarized federal agents have flouted court orders protecting the rights of protesters from local law enforcement attacks, used sharpshooters to maim people, and deployed military tools and tactics — including sonic weapons and tear gas. Black Lives Matter protesters in Portland have been shot in the head with kinetic impact munitions, swept away in unmarked cars, and repeatedly tear gassed by federal agents. These government-issued weapons are funded with our tax dollars.

Even more, federal agencies appear to be doubling down on these harsh tactics, saying they will not leave the streets of Portland and will take their disturbing practices nationwide. DHS, and its sub-agencies Immigration and Customs Enforcement and Customs and Border Protection, already have a well-known history of abusing human rights and a documented disregard for human life. Now, they are using federal taxpayer dollars to militarize their agencies and ignore the bounds on their power.

This is a fight to save our democracy — here in Portland and nationwide. And we’re just getting started.

This has to stop. We cannot sit idly by and accept this as the new normal — in Portland or anywhere else in this country. And we must not let federal or local law enforcement suppress or control what people know about their violent tactics by attacking journalists and legal observers. Public transparency is a baseline requirement for democracy and accountability.

Remember: Without people filming the police, the officers who murdered George Floyd would never have had to answer for his death.

That is why the ACLU of Oregon took our local police department to court, and secured a court order blocking its unconstitutional attacks on journalists and legal observers. And that’s why we’re taking the federal agents to court, too. We will not rest until law enforcement agencies — at all levels of government — are held accountable for their brutal, inhumane, and unconstitutional attacks on the people of Portland.

This is a fight to save our democracy — here in Portland and nationwide. And we’re just getting started. We will not let up until these federal agents leave our city, and these unconstitutional attacks on the right to protest against police brutality end.