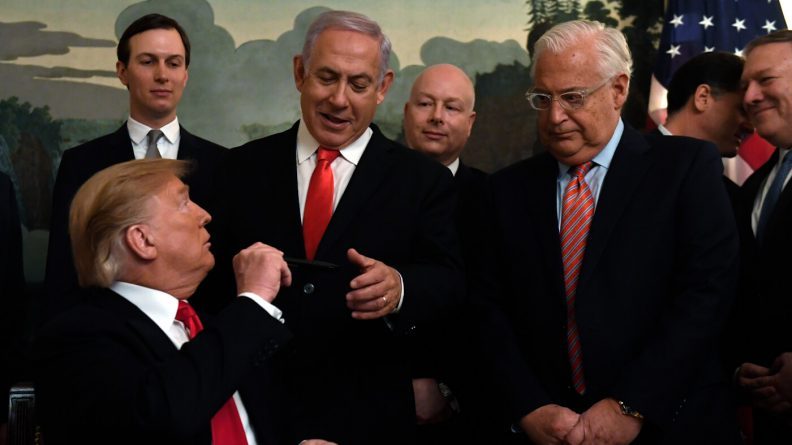 Recently leaked provisions of the plan include threats of US sanctions & military force if Palestinians reject the plan and a requirement for Palestinians to pay the Israeli Defense Forces for protection.

The Israeli newspaper Israel Hayom, owned by top Trump donor Sheldon Adelson, has published in Hebrew a leaked draft of the Trump administration’s “Deal of the Century” for the Israel-Palestine conflict. The draft was given to the newspaper by an official from Israel’s Foreign Ministry, which is currently headed by Israeli Prime Minister Benjamin Netanyahu. The plan, which has been drafted by President Donald Trump’s son-in-law Jared Kushner and Jason Greenblatt, is expected to be released this June after the conclusion of the Muslim holy month of Ramadan, according to Mondoweiss.

The draft plan published by Israel Hayom, while in keeping with many of the details that have been leaked to the press in past weeks and months, contains several new and troubling claims, including the Trump administration’s plan to force Palestinian leadership to accept the plan through threats of economic strangulation and military force.

For instance, if Palestinian leadership — such as the Palestinian Authority (PA) or Hamas — rejects the Trump administration’s “peace plan,” the United States will respond aggressively by ensuring that “no country in the world transfer money” to Palestine, which would apparently be accomplished through U.S. sanctions. With Palestine’s economy and the livelihood of many Palestinians dependent on foreign aid, such an act would amount to economic strangulation of the over 6 million Palestinians in the West Bank and around 2 million Palestinians in the Gaza Strip.
Furthermore, if the PA accepts the plan but Gaza’s leadership — i.e., Hamas — rejects it, “the U.S. will back Israel to personally harm leaders of Hamas and Islamic Jihad” and the U.S. will hold Hamas fully responsible for any future “round of violence between Israel and Hamas,” regardless of the circumstances that initiate that violence. In other words, the Trump administration is willing to join a future war against the embattled Gaza Strip, described by the United Nations as an open-air prison that is already largely unlivable for its inhabitants and under a full blockade, if Hamas rejects the Trump administration’s plan for the Israel-Palestine conflict.

Thus, the draft plan states that the Trump administration’s tactic of negotiating with the Palestinians involves a combination of threats of economic destruction and military destruction aimed at bullying an already dispossessed people into accepting a plan that clearly favors their occupiers.

Creating a “new” Palestine
In addition to the Trump administration’s apparent game plan to force Palestinian compliance with the so-called “Deal of the Century,” the plan also calls for the creation of a demilitarized state of “New Palestine” that would be incredibly small, as the document calls for the Israeli annexation of the entirety of the Jordan Valley (around 30 percent of the West Bank) and the annexation of all illegal Israeli settlements in the West Bank, which now cover well over half of what international law maintains is Palestinian territory.

This “new” state would be showered in aid from several countries, including the Gulf monarchies, European nations and the United States, allegedly amounting to $30 billion over the next five years. Most of the funding, according to the plan, will come from oil-producing Gulf states like Saudi Arabia. It is unclear whether “New Palestine” would be considered a sovereign state and whether it would be allowed to apply for full membership in the United Nations.

While the plan would allow “New Palestine” access to Jerusalem as a shared, undivided capital with Israel, Palestinians would be responsible for paying the state of Israel for their security because it would be forbidden from having its own army. In other words, Palestinians would be forced to pay the Israel Defense Force (IDF), the military force that has occupied the West Bank for over 50 years, to “protect” them despite the fact the Palestinians are regularly extrajudicially murdered by IDF soldiers. However, the apparent “concession” offered by the Trump administration in this regard would be allowing the “New Palestine” to maintain a police force with “light weaponry.”

In addition, the plan apparently concedes to some past Palestinian demands, such as the release of Palestinian prisoners over a three-year period. However, the draft of the plan published by Israel Hayom does not address Palestinian refugees or the right of return of those refugees in any capacity.

Outsourcing the destruction of Palestine
The fact that this draft of the plan was released to the Netanyahu- and Trump-aligned Israel Hayom by Israel’s Foreign Ministry — itself run by Netanyahu — strongly suggests that Israel’s government was ready to make the details of the plan known to the Israeli public. The draft, which was dismissed by at least one unnamed White House official as “speculative,” reveals an Israeli-centric plan that will likely be rejected by both Israeli right-wing hardliners and a majority of Palestinians.

However, Israel’s leadership is likely to accept the plan only because they know that the Palestinians will reject it, allowing them to blame the failure of the Trump administration-brokered “peace process” on the Palestinians.

Indeed, Dr. Riyad Mansour, the Palestinian ambassador to the United Nations, affirmed on Tuesday that the PA considered the “peace plan” as merely a pretext to a long-planned West Bank land grab by Israel and planned to reject the so-called “Deal of the Century. “If what we read is what is to be expected from this plan, then it seems that the objective of it is not a solution to the conflict, but to give pretext to the Israeli government to annex other portions [of the West Bank],” Mansour recently stated at UN headquarters.

Some in the [Trump] administration, they think, ‘Yes, what will help peace is break the legs of the Palestinians, break one arm and five teeth, and when they are on the ground they will come crawling to you for anything you offer them.’ Those who think that way don’t know the Palestinians.”

The Palestinian plan to reject the Trump administration’s deal is no secret, with the outgoing French ambassador recently describing the plan as “dead on arrival.” This fact of assured rejection makes all the details of the plan irrelevant, save for the part of the plan that deals with “penalties” for the Palestinians if they reject the plan.

Those penalties should draw the most concern as the “peace plan” is made public, as it harkens coming U.S. military involvement in a future war between Israel and Gaza –regardless of whether that war is initiated by Gazans or Israelis — as well as extreme economic hardship on the West Bank through U.S. sanctions.

Netanyahu has made no secret of the fact that he does not want the two-state solution provided in this U.S. plan, even if the Palestinian “state” is demilitarized and minuscule. However, if the Palestinians reject the plan — as he knows they will — the United States will do the work of further destroying Palestine for him by committing to a future U.S. invasion of Gaza and to the economic strangulation of the West Bank. These “penalties” will allow Israel’s government to blame Palestinians for their own foreign-imposed hardship while giving Netanyahu’s government leeway to fulfill its long-standing goal of “conquering” the Gaza Strip and completely annexing the entirety of the West Bank.

As Mansour noted, the “peace plan” is indeed a pretext, but for far more than a land grab. Instead, it is a pretext for outsourcing the destruction of Palestine to the United States under the cover of a “peace process” that no diplomats — in Israel, Palestine or elsewhere — have at any point taken seriously since the early days of the Trump administration.