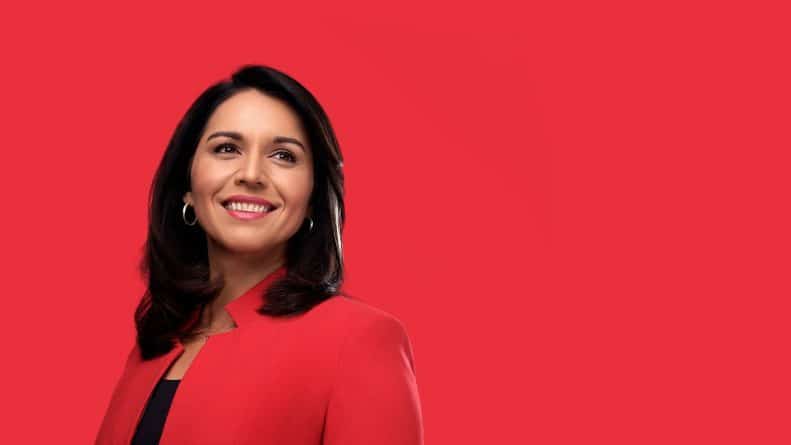 Beware fake warrants and orders in the hands of federal officers. On May 13, 2019, Secret Service, D.C. and State Department agents attempted a coordinated raid on the Venezuelan Embassy in Washington D.C. But their order was fake and in the end, after breaking the locks and entering the building, the agents had to back down and leave with the embassy protectors victorious.

Across the country in Santa Monica, California, Congresswoman Tulsi Gabbard, held a pre-event press conference in which she expressed concern for the mistreatment of the embassy protectors, calling them “PEACE WARRIORS” and saying the “United States needs to keep our hands off Venezuela.”

Tulsi is the only 2020 Presidential candidate who has spoken out in support of the Venezuelan Embassy Protectors or rather, “Peace Warriors.” She is the only candidate who has stood firm against regime change wars and sanctions, both in legislation, positions and in rhetoric. She has consistently been the only candidate to stand up for the people on important issues, such as her opposition to the arrest of Julian Assange. Tulsi Gabbard is also the only 2020 Presidential candidate who went to Standing Rock in support of the Native Americans protecting the water in 2016. The other candidates just did not care.

Therefore, it is no surprise that wherever Tulsi speaks, the auditoriums are filled past capacity with people lining the walls and with authorities telling volunteers that hundreds more would-be observers cannot enter due to concerns that a fire marshal would be called in due to overcrowding. Concerned about those unable to get into the Santa Monica event, Tulsi went outside and walked down the line personally greeting those who had come in the hopes of getting a glimpse of The Peace Presidential Candidate of 2020.

Inside, on issue after issue, Tulsi words were met with thunderous applause. Tulsi was the DNC Vice Chairman who stepped down in 2016 to support Bernie Sanders in his Presidential bid. She introduced Bernie at the National Convention that year. On domestic policy, such as Medicare for All, and College for All, they two are unified in their positions. Tulsi had gone further to introduce legislation for paper ballots to prevent election-rigging. Her voting record shows that she is the most pro-LBGTQ of all the candidates. She also introduced legislation to end the imprisonment of marijuana users. At the Santa Monica event, she made it clear that she considers housing to be a human right.

ON foreign policy, Tulsi is the top Congressional leader promoting peace. She introduced a bill calling on the United States Government to stop funding terrorists and pushed the legislation to stop U.S. support for the war on Yemen. Tulsi was the first member of Congress to openly support Ilhan Omar when the later was under attack. Tulsi has been speaking out against war with Iran. She is a major in the National Guard and she learned first-hand the costs of regime change wars during her two tours of duty in Iraq. She believes these regime change wars are a disservice to our service men and women. When asked what she would do with respect to Afghanistan and Iraq when she takes office, she informed the audience she would start bringing the troops home.

So it is no wonder that, with all of Tulsi’s courage, she is the only 2020 candidate speaking out in support of the Embassy Protectors and in support of Julian Assange and the strongest candidate for ending regime-change wars.

The major pollsters are refusing to ask her name in their polls. Then they proceed to show results for a candidate who was not included in the polls. In response, more and more Americans are refusing to participate in polls that do not include Tulsi Gabbard’s name. When you see a poll, you are therefore likely seeing only the choices of the pro-war respondents. Judging from the crowds who cannot get into the arenas where Tulsi speaks and from the overwhelming enthusiasm of crowds for her positions, there is no doubt among those who see Tulsi that she is a frontrunner in the 2020 race.