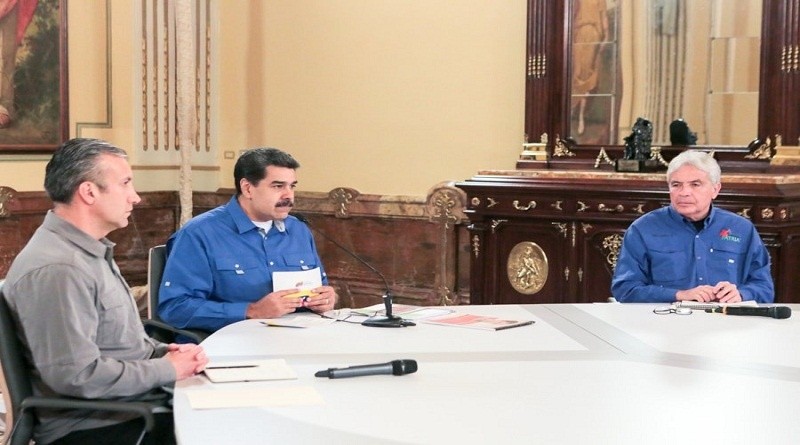 International News
May 15, 2019May 16, 2019 eferrari10 Blockade, flights suspension, NOV, trump lost in space, Trump not knowing what to do, US Sanctions, YV

Calls from the Venezuelan right have caused the imperial government of Donald Trump to order the suspension of commercial flights and even of private planes between the US. and Venezuela, in an illegal decision that affects freedom of air movement, denounced on Wednesday the Constitutional President of the Bolivarian Republic, Nicolás Maduro Moros.

“Who are the owners of private planes? They are entrepreneurs, people with many resources (most of them anti-chavistas). They are forbidden to fly to the US from any airport in the world,” argued the head of state from Miraflores, where he led an informative broadcast on economic development.

He took the opportunity to alert the world about the new coercive measures that were added to the imperial blockade against all Venezuelans, without distinction of ideology or social condition.

He commented that private planes with YV license plates, a nomenclature that identifies Venezuela, and US aircraft (NOV), will not be allowed to fly between the US and the country.

“Who travels? Venezuelans who live in the US and come to Venezuela, who have businesses or relatives and travel regularly. Suspending those flights hurts those Venezuelans (mostly anti-chavista people), US citizens and people of other nationalities,” he explained.

He asked himself: “What did the Trump government win by suspending commercial flights? Nothing, he hurt himself and citizens who use freedom of movement through commercial flights. “. Incredibly, the US was for years the main critic of Cuba’s travel restrictions.

The Venezuelan President exhorted the opposition in good faith to reflect on this new attack of the North American empire, now affecting the freedom of travel of all human beings.

“You, Mr. Trump, are an attacker of the freedom of movement of the citizens of the world. Where is the freedom that you trumpet?”, he asked.

Maduro described this new and extreme measure as a result of the hatred and revenge that nests in the US government after the failure of the coup d’état on April 30.

“Why do they make these decisions? Out of hatred, revenge, frustration, spite and harm to ordinary citizens, especially the middle and business classes of Venezuela. To his own people who want to travel to or from Venezuela! “, he said.

He lamented that the international right, the imperial government and “Venezuelan lackeys” make every day an opportunity to attack with measures that have no justification whatsoever.

“It has no name, every time they go from bad to worse, because of the call made by the opposition coup and the stateless right,” he said.

He considered that Trump is warned of the consequences and the damage he is doing to all Venezuelans and bilateral relations. But in particular he is aware of the lack of results of his (Trump’s) policy of destabilizing and changing the regime, coup provoking and interventionist, which so far has had contrary and adverse results to their interests of looting Venezuelan riches.

“This is crazy, I do not know if Trump is fully aware of where his team of John Bolton and company is taking him,” he reflected.

“It is failing and they are acting from disillusionment, with a desire for revenge,” he reiterated.

However, the President assured that the empire will not be able to achieve its objectives of doing so much harm to Venezuela, because Bolívar’s homeland will continue its course of development, in peace and in total resistance.