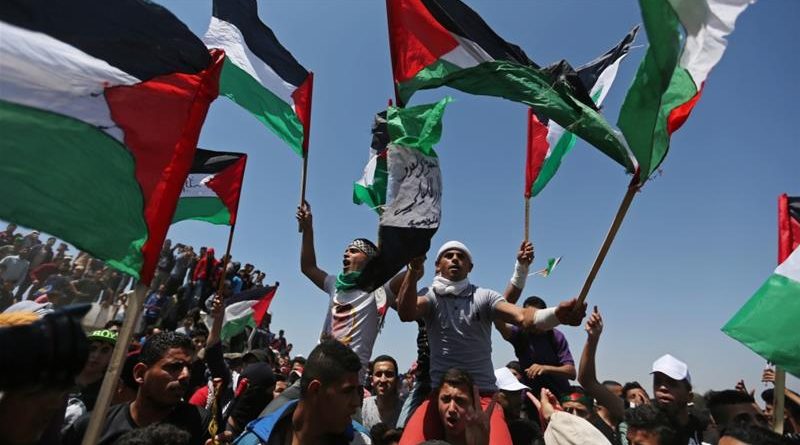 Official says 76 people were also wounded by Israeli army at protests attended by more than 5,000 people.

Two Palestinian teenagers have been killed by Israeli gunfire during a protest along the Israel-Gaza border fence.

Gaza’s health authorities said Ali al-Ashqar, 17, and Khaled al-Ribie,14, were shot in the chest by Israeli police on Friday while thousands of Palestinians held protests at several sections of the fence.

Ashraf al-Qidra, a spokesman for the Palestinian Ministry of Health in Gaza, told Al Jazeera that 76 people were also wounded by Israeli fire, 45 of whom were targeted.

“Most of the victims suffered upper-body wounds which shows an intent to kill,” he said.

More than 5,000 Palestinians participated in Friday’s march, according to people who took part.

The Israeli army quoted a higher number of participants, saying 6,200 people gathered at several points along the border with Israel.

The weekly protests have been organised by The March for the Right of Return Commission, a coalition of civil organisations since March 2018.

Ghazi Hamad, a senior Hamas official in Gaza, told Al Jazeera that Israel had a policy of targeting Palestinian protesters, but the level of its action against them often related to the political situation between Israel and Hamas.

Hamad pointed out that Friday’s killings and the high number of injuries were indicative of the lack of “political understandings” between Israel and Hamas.

“When there is no political agreement or understandings between Hamas and Israel, as it is the case now, the borders get tense and Israel often escalates its lethal reaction,” he said.

Lack of hope
A Palestinian who regularly attends the marches told Al Jazeera from Gaza that most people take part because they and their families are feeling an intense toll from the economic blockade, and also from the closure of the border crossing between Gaza and Egypt.

“People have lost hope. There is only despair and misery all around them,” said the Palestinian, who did not want to be named.

The marches have become less intense in recent months after mediators brokered an unofficial ceasefire earlier this year. More than 200 Palestinians and one Israeli soldier have been killed in these marches since 2018, according to The Associated Press.

About 70 percent of Gaza’s two million Palestinians are registered refugees who were originally expelled from their homes by then Zionist armed groups before the founding of Israel in 1948.

Featured image: More than 200 Palestinians and one Israeli soldier have been killed in these marches since 2018 [File: Ibraheem Abu Mustafa/Reuters]