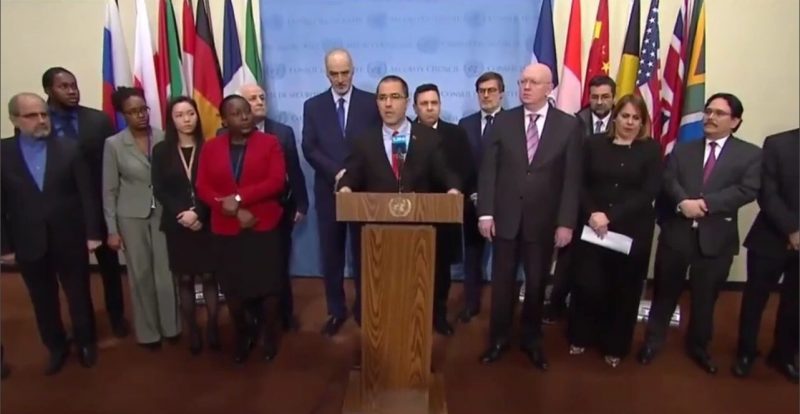 Venezuelan Foreign Minister, Jorge Arreaza, read Thursday from the headquarters of the United Nations (UN) in New York, accompanied by ambassadors and permanent representatives of several countries, including Russia, a diplomatic initiative to defend the rights of the peoples to coexist under the principles of public international law, to live in peace, without foreign interference.

“This group of countries will jointly organize a strategy not only for the defense at this time of the Bolivarian Republic of Venezuela and its people. This is a juncture. But it is about the defense of the principles of Public International Law, the rights of our peoples to live in peace, without interference, without being threatened with the use of force, and we are doing it collectively “, Arreaza explained.

In the broadcast on Telesur from the headquarters of the UN, in New York, United States, he indicated that with the Security Council, the General Assembly, the General Secretariat, in all instances “we are going to have joint and coordinated actions to defend the rights of peoples and International Law “.

The head of the Foreign Ministry ratified the sovereign nature of the nation and the willingness to defend the national territory against the interventionist threats of the United States Government.

“They should know that Venezuela is a sovereign country and we will protect every inch of its territory , defend all its maritime, land and air space and the responses we will give will be proportional to any kind of attacks and interventionist actions planned against our country,” he reiterated.

He indicated that they are working in various instances and agencies of the United Nations to carry out a strategy that includes not only the defense of Venezuela but the defense of the principles of the UN.

“The United States has no moral authority to impose sanctions on anyone. Only the resolutions of international organizations such as the UN are legal and will be recognized by the member states. Beyond that, they are unilateral actions,” he declared.

He also called on the media not to participate in the actions that are carried out from the United States on the issue of humanitarian aid and stressed that the Venezuelan State will defend the Venezuelan people against threats. “We ask the media not to get involved with this orchestrated show from the United States in reference to the issue of humanitarian aid (…) We are a sovereign country, we are going to protect our people despite all the threats. We must ask the media not to be part of a bloodshed in Venezuela, “he said.

The foreign minister stressed that in Venezuela there is only one government, headed by Nicolás Maduro, and not “a man who proclaimed himself in the middle of a street, anything he says is totally absurd and illegal.”

On January 23, the deputy to the National Assembly in contempt and legal nullity, Juan Guaidó, proclaimed himself “interim president” of Venezuela, with the backing of the United States and other countries of the European Union that seek to overthrow President Maduro.