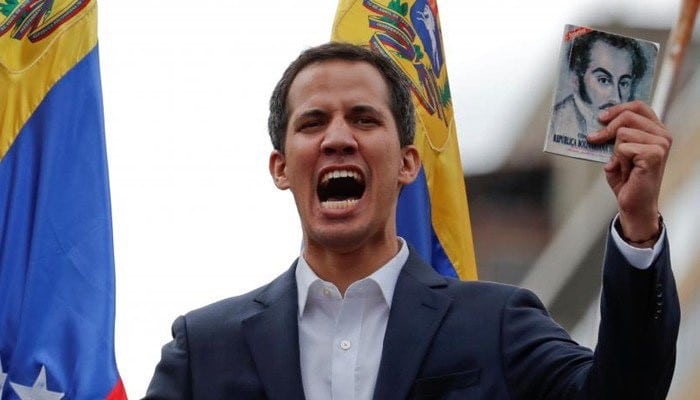 Caracas (GPA) – In an interview over the weekend, “interim President” of Venezuela Juan Guaido promised he would work on restoring relations with Israel.

Despite not actually having a government or being in any type of official position of power within Venezuela Juan Guaido is still somehow making big promises. Last week it was the promise to sell oil he doesn’t control to the US and this week he is setting foreign policy for a state, a military, and a diplomatic core that he doesn’t have.

Regardless of Juan Guaido’s material position, Israel has been more than willing to indulge in the US fantasy in Venezuela and was one of the early states to recognize the fraud as “interim President.” Now it seems Guaido is more than willing to repay the favor should he ever actually hold office.

Guaido made this promise in a recent interview with the Israel Hayom newspaper where he told the interviewer that he was “very happy to announce that the process of stabilizing relations with Israel is in full swing.” While what exactly that means when you’re a President with no power is rather ambiguous, for some reason Guaido has said restoring relations “is very important for us.”

Regardless of all these factors, there are still several reasons the new President has made this a high priority. Even without any actual diplomatic staff recognized by the state, Guaidó has still been in contact with Israel and has even discussed opening a new Venezuelan embassy in Israel, saying it “is one of the subjects we are talking about.”

Another reason Guaidó claims he wants to restore relations with the Zionists is due to the fact that “Rhett are many Venezuelans in Israel and many Jews in Venezuela.”

According to Guaidó, this Venezuelan Jewish community “is very active and prosperous” and have expressed to the president their hopes for renewed relations with Israel.

Relations between Israel and Venezuela were cut off in 2009 under Hugo Chavez, the previous Venezuelan President and mentor of Nicolás Maduro. Chavez knew well that Israel is very active in Latin America in helping the US subvert democracy and didn’t wish to allow the Zionists a base of operations in his country.

Obviously, the reasons cited by Hugo Chavez to justify throwing the Zionists out of Venezuela is perfectly legitimate but this has been a sore point with Washington and imperial media for some time. US media considers the fact that Chavez expelled the Zionists and supported Palestine as proof of the anti-semitism inside the United Socialist Party of Venezuela (PSUV).

This is all totally ridiculous of course and the Chavistas chose to expel the Israelis in solidarity with Palestine against imperialism. This shift in foreign policy was framed as dangerous and the distrust of Zionism is said to be responsible for the “flight” of Venezuelan Jews to Israel.

But just how big is this important Jewish community?

Before Chavez, the total Jewish population in Venezuela was only estimated at about 22,000 out of over 30 million. Since Chavez took power that population has dwindled down to around 7,000 meaning there are about 15,000 Venezuelan Jews in Israel.

Supposedly restoring the Venezuelan embassy in Israel is very important, just not to more than about 20-30,000 people. Many Venezuelans still oppose any type of outside intervention in their country and it likely wouldn’t matter if it was US or Israeli soldiers but Guaidó is clearly more beholden to his foreign backers than he is to his own people.

With all that said, Guaidó still hopes Israel will invest more in regime change in his country. “Many Western countries have already committed to sending humanitarian aid to Venezuela,” he said adding that he is “confident that Israel will also help us.”

Since Israel is basically a US proxy this likely means Guaidó would like aid from them in the form of firearms like the ones Washington recently tried to smuggle in. Chavez made the correct choice in throwing out the Zionists and their agents of subversion, meaning the best hope for Venezuela to remain independent is for the Chavistas to uphold this legacy of anti-imperialism.