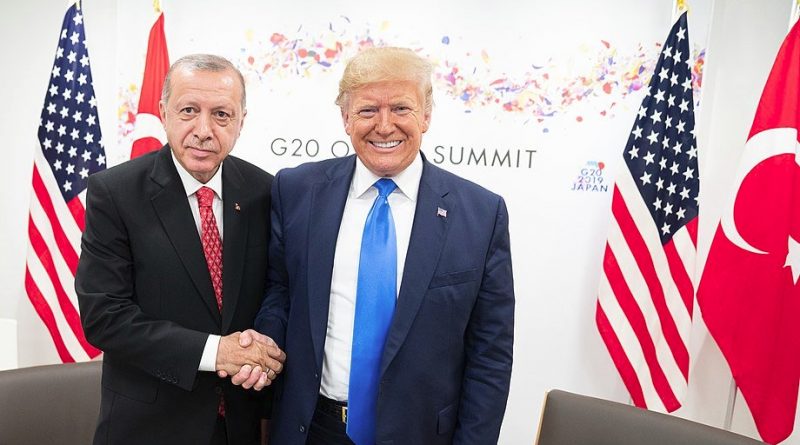 The Turkish invasion and bombardment of northern Syria is patently illegal and must be opposed. So too is the U.S. military occupation of Syria. The sovereign government of Syria has not invited U.S. or Turkish troops into its country. Rather it has condemned their presence as a violation of its sovereignty and international law. In just the first day of this operation, dozens of civilians have reportedly been killed and tens of thousands displaced.

That Trump’s Democratic Party opponents and his Republican Party supporters are condemning his announcement of a “pullout of US troops from Syria” is testament to the fact that the entire U.S. political establishment is thoroughly imbued with imperialist ideology. But Trump is not pulling the troops out of Syria. They are only being removed 20 miles south so that a Turkish military incursion can negate the possibility of the formation of a Kurdish-governed zone, be it in the form of an independent state or as an autonomous region within Syria.

The Pentagon will, for the sake of damage control, distance themselves from the Turkish invasion, and Trump will deny he gave Erdogan the green light. But there is no doubt that this was coordinated. In essence one NATO power has turned over military control of a strip of northern Syria to another NATO ally.

But it is not theirs to give. Neither the U.S. nor Turkey have any right to be in Syria. Nearly all the mainstream opposition to Trump and the Turkish invasion is obscuring this central fact.

From Ilhan Omar to Mitch McConnell, MSNBC to National Review, all are now pounding away at Trump for leaving an opening in Syria to “enemy states” — implying the far-flung U.S. Empire is a force for good and stability, with unlimited global police powers and exempt from international law. Even some of those who said “Bring the Troops Home” for Iraq and Afghanistan now find themselves echoing the neo-conservative talking points, defending a long-term illegal occupation of northern Syria in the name of “protecting our allies.”

This type of struggle against Trump is not being waged on an anti-war or progressive basis. The ruling-class argument is not that Trump is too much of a militarist or imperialist but rather that he often doesn’t follow through with his tough talk. At the United Nations two weeks ago, Trump delivered one of the most bellicose speeches ever given to that body — an incredible display of swaggering, colonial arrogance, contemptuous of the rest of the world and threatening devastation to those who resist. But instead of making a big deal about this, the “liberal” New York Times has goaded Trump with a series of articles about how he “speaks loudly and carries a small stick.” Particularly upsetting to them is that he called off the Iran strikes this summer — making the spectacular claim that not bombing Iran has destabilized the region.

RELATED CONTENT: Erdogan Threatens to Open the Floodgates if the EU Labels Attack on Syria an “Invasion” (3.6 Million Refugees to Europe)

At the top echelons of the U.S. ruling class, the problem with Trump is not that he is too much of a militarist — or alternately, that he’s too soft. It is that he is too unreliable, unpredictable and self-motivated to safeguard the Empire, and its system of alliances that they have carefully constructed over the last 70 years. For them, safeguarding these interests is the real job description of the President, and he is failing at it. They might even take him out if he wreaks more damage.

The anti-war movement must, by contrast, denounce Trump on a completely different basis. We must say that Trump, while giving voice to the popular sentiment to end the “forever wars,” is in fact lying. He is not pulling U.S. troops out of Syria — only pulling them away from a 20-mile strip so as to cynically deliver the territory to Erdogan. Trump tanked the peace talks at the last second to end the Afghanistan war — apparently caving to those like Pompeo, Pence and Bolton who advised him to do so. On North Korea, Trump has provided spectacle but nothing of substance; the occupation of southern Korea continues, along with the deployment of weapons systems, the war games and illegal sanctions. For all the talk about Ukraine, few are pondering the fact that Trump did what Obama cautiously refused to do: to deliver the Javelin anti-tank missile system to that far-right country, which will only deepen the bloody quagmire in the east and could lead to dangerous direct war with Russia. Trump has dramatically increased the attacks on Cuba, Venezuela and Nicaragua with punishing sanctions that have choked off these countries’ access to international trade — blatant economic warfare to which the “liberal” opposition have hardly batted an eye.

Is there another solution in Syria? The Syrian government has condemned the Turkish invasion and promised to, alongside the SDF/YPG, jointly defend the country’s sovereign territory. There is reportedly a consistent line of communication between the two forces; the stipulations and status of a deeper agreement are unknown at the time of this writing. But such a realignment would make a huge difference in the military and political relationship of forces. The two forces have a complicated relationship over the last eight years (and prior) — sometimes opposing each other, and at other times working together. A new agreement of this nature would presumably endanger the ongoing U.S.-SDF relationship in other parts of the northeast, outside of the 20-mile strip. As of now the Kurdish-led military forces appear to be signaling a desire to maintain an alliance with U.S. military forces in the rest of northern Syria.The road to justice for Kurdish people or any minority people cannot be through a military alliance with predatory imperialism. U.S. imperialism is an obstacle to peace and self-determination and not its agent.

Despite the sizable territory they control, Kurdish forces have been wrongly excluded from the Astana peace process which aims to produce a new Syrian constitution. Notably, they have been excluded not by Russia, Iran or the Syrian government but by Turkey, who refused to participate or allow the Free Syrian Army to participate, if the SDF/YPG were present. The only other proposal to head off a larger confrontation is Russia’s idea of reviving the 1998 Adana Accord between Syria and Turkey. But this is highly unlikely, as it would require Turkey, the largest sponsor of terrorism and mercenaries in the Syrian conflict to normalize its relations with the Syrian government. It would likewise require, as the original 1998 agreement stipulated, that the Syrian government would use its own military to work jointly with Turkey to contain the Kurdish national movement and it could still give Turkey a right to cross the border.

So at this point, the options are for the SDF/YPG to fight alone against a much larger Turkish military, or to make an agreement with the Syrian government. The SDF/YPG is sending mixed signals at the moment. As stated above, some statements that appeared in the media indicate that these forces may be seeking to maintain an alliance with the U.S. further away from the border area in northern Syria. Such a long-term alliance with U.S. imperialism, which has illegally occupied the region and whose latest betrayal follows a century of betrayals, cannot be politically justified, and is clearly being withdrawn already by the Trump administration.

The SDF/YPG forces have in prior interviews invoked the spirit of the U.S.-Soviet military alliance against the Nazis to explain the temporary confluence of interests with the U.S. military. This was the logic behind the call for U.S. air support to prevent ISIS from capturing and wiping out a Kurdish city of Kobane. But ISIS is largely defeated, and in the long run, everyone has understood that at some point the U.S. forces would have to leave and the Syrian government would remain. Moreover, no one seriously believes that the U.S. would ever fight a NATO ally, Turkey, in defense of the Kurdish people. The relationship of forces was bound to come to this sooner or later, as the SDF/YPG has long admitted in interviews. They have wanted to delay the arrival of that day, and were undoubtedly surprised that it had come in such a sudden and uncoordinated way.

The truth is that most of the Western forces, conservative and liberal, who are crying crocodile tears over the Kurdish suffering care only about the projection of U.S. military power in Syria for geopolitical reasons. When the YPG fought in Aleppo alongside the Syrian government and against the Free Syrian Army and Al-Qaeda forces, these same Western forces cried out #SaveAleppo. When Turkey invaded Afrin and ethnically cleansed it of Kurds last year, they said nothing because Afrin was not part of U.S.-controlled territory. When Erdogan represses the Kurdish people in Turkey, the U.S. government sells him more weapons to do so — without objection from the establishment here. If the SDF were to now ally with the Syrian government as a matter of self-defense against the Turkish invasion, where would Western liberal and conservative sentiment then stand? They would stand with Turkey — a NATO ally — and the Free Syrian Army-related mercenary forces, just as they have stood with them over the last eight years.

Erdogan’s dream of a neo-Ottoman Empire has already been dashed. His goal of overthrowing the Syrian government has been defeated, after causing great suffering for the Syrian people, an explosion of fundamentalist death squads and groups like ISIS and a massive refugee crisis. With his star fading at home, Erdogan — who at one point was maneuvering as a peacemaker on the Kurdish question — has now turned to an all-out chauvinist crusade against the Kurdish minority within Turkey and across the border. He will meet considerable resistance in Syrian Kurdistan on one side while progressive workers in Turkey are already mobilizing at home against this criminal and dangerous adventure.

From the United States, our message is clear: Down with the Turkish invasion! U.S. and Turkey out of Syria and the Middle East!