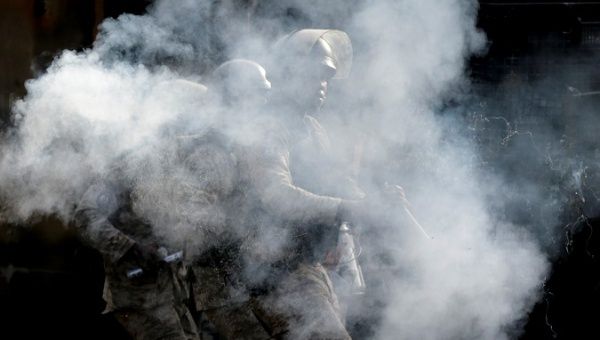 Haiti has experienced political-social tension marked by violent demonstrations and police repressions in response to fuel shortages and government corruption amidst extreme poverty.

The Haitian police used tear gas to disperse hundreds of opposition protesters who defended themselves with stones and bottles, upon trying to reach the residence of Haitian President Jovenel Moise, to “collect his resignation letter.”

The protesters had gathered in Petion-Ville just outside of the capital of Port-au-Prince from where they planned to journey to the president’s house.

Another group of opponents, conglomerated in St-Pierre Square and tried to march towards the Pelerin sector, where the leader lives on top of a hill. Over the past four weeks, Haiti has experienced a situation of tension marked by violent demonstrations and police repressions in response to fuel shortages and government corruption amidst long-term poverty.

RELATED CONTENT: Haitian Bishops’ Justice Commission Calls on President to Step Down and US Haitians Demand Pelosi to Stop Meddling

The lack of gasoline has weighed even heavier on citizens and residents of the highly impoverished country as hunger and insecurity grow.

Since February, Haiti has been the scene of massive and deadly protests by demonstrators demanding the resignation of Moise and his administration amid major corruption allegations.

When the country was already dealing with a tense economic crisis and high inflation, a report was published accusing the President Moise and dozens of officials of having embezzled US$2 billion from Petrocaribe, the cut-price-oil aid program that Venezuela offered to several Caribbean countries, among them Haiti.

The funds were meant to finance infrastructure development along with health, education and social programs across the impoverished nation. The president has since refused to step down and Congress has been three-times unable to push forward his resignation.

The Carribean country of 11 million people has been struggling for decades to overcome extreme poverty along with widespread corruption. These last ten years were particularly harsh for Haiti, which went through one of the world’s deadliest earthquakes in 2010, an epidemic of cholera, brought in accidentally by United Nations peacekeepers, and Hurricane Matthew in October 2016.

The current crisis has led to the closure of schools, several hospitals, and has impeded the delivering of humanitarian aid to vulnerable sectors.

According to a report published earlier this month by the National Network for the Defense of Human Rights (RNDDH), at least 17 people have died and 189 have been injured in the Caribbean country since protests began months ago.

Featured image: Security forces clash with demonstrators during a protest to demand the resignation of Haitian president Jovenel Moise, in the streets of Port-au-Prince, Haiti October 11, 2019. | Photo: Reuters