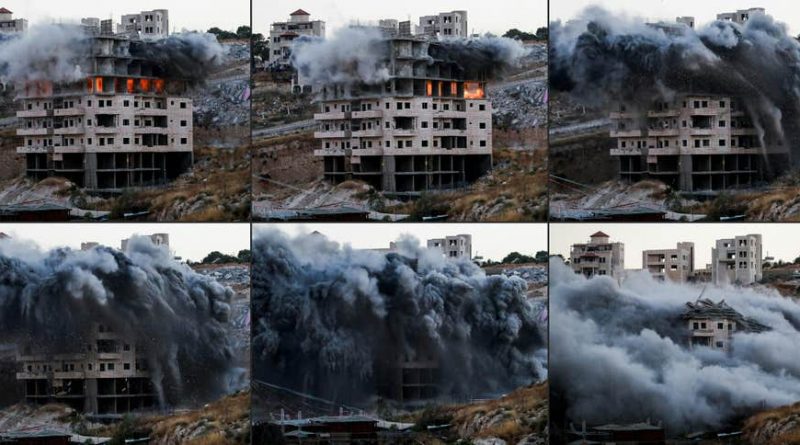 The US House of Representatives also voted to condemn boycotts against Israel this week.

The United States blocked an attempt to get the United Nations Security Council to condemn Israel’s demolition of Palestinian homes on the outskirts of Jerusalem, diplomats said.

Citing 17 Palestinians who would be displaced by the destruction, UN officials had called on Israel to halt the plans. But Israel continued, saying the 10 apartment buildings it demolished on Monday had been built illegally, and posed a threat to Israeli armed forces along the occupied West Bank. Most of the homes were still under construction.

On Tuesday, Kuwait, Indonesia, and South Africa circulated a five-paragraph draft statement to the 15-member Security Council expressing concern. The document, seen by Reuters, warned that the demolition “undermines the viability of the two-state solution and the prospect for just and lasting peace.”

The US told its counterparts that would not support the text, diplomats said. The country also rejected a revised three-paragraph draft statement.

Back home, the US House of Representatives voted to condemn the growing boycott movement against Israel on Tuesday, following a similar bill passed by the Senate.

Freshman congresswomen Ilhan Omar and Rashida Tlaib both voiced concern for the vote. Representative Tlaib, the first Palestinian American woman in congress, gave a speech on the House floor the morning of the vote about her personal experience.

“I stand before you the daughter of Palestinian immigrants,” she said. “Parents who experienced being stripped of their human rights, the right to freedom of travel, equal treatment. So I can’t stand by and watch this attack on our freedom of speech and the right to boycott the racist policies of the government and the state of Israel. I love our country’s freedom of speech, Madam Speaker. Dissent is how we nurture democracy.”

RELATED CONTENT: “Israel” Arrested 900 in Jerusalem, One Third are Children

Still, the bill passed with only seventeen members voting no, including fellow “Squad” member Alexandria Ocasio-Cortez. Representative Ayanna Pressley, the fourth member of the group of freshmen women who recently faced virulent attacks from the president and his supporters, voted yes.

The future of Jerusalem, which is home to over 500,000 Israelis and 300,000 Palestinians, is a longstanding international debate. Palestinians want a state in the West Bank and Gaza Strip with east Jerusalem as the capital, all territory captured by Israel in 1967. Allies on both sides have been fierce with both support and detraction.

Donald Trump’s Middle East envoy Jason Greenblatt and senior adviser and son-in-law Jared Kushner have spent two years developing a peace plan they hope will provide a framework for renewed talks between the groups. The role of Mr Kushner, whose background is mostly in real estate, in the complicated diplomatic situation has been questioned.