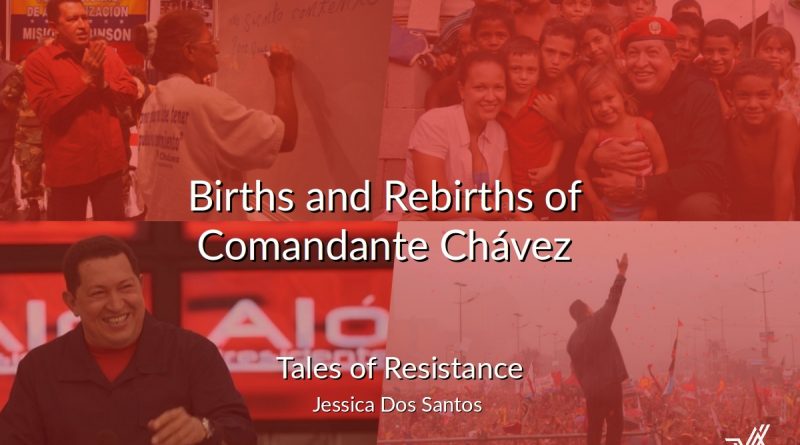 President Hugo Chávez was born on July 28, 1954. However, as Gabriel García Márquez would say, “human beings are not born for good the day their mothers give birth to them, rather life forces them to be reborn time and again.”

Thus, Chávez was reborn, by natural birth or emergency C-section, every time the times and the national context demanded he reinvent himself.

That is how we got to know Chávez the politician, the philosopher, the historian, the economist, the soldier, the religious man, and you can go on counting. But, in each of these lives, culture was ever present.

The first time he spoke about “culture” was during his electoral campaign in June 1998: “Children, when they get to school, they need to receive a dignifying message that will raise their spirits and not repress them. We should prepare them with freedom, with dignity, through culture and education. Our education, our culture, is one of the areas that needs emergency action. We need to put a stop to children on the streets. We can’t have kids on the streets, kids need to be in school, fly kites, play football, and be happy.”

And that’s what I was: a 9 year-old carajita (kid) listening to him in the old living room TV set. But outside my building, in a busy neighborhood of Caracas, tons of kids slept in the streets. It was hard to believe this man would one day achieve what he promised. But he did.

Within the first months of his term, the government was able to remove kids from the streets. Not by disappearing them in the kind of “social prophylaxis” employed in the past, nor putting them in child exploitation networks, but through a profoundly integral social care.

Later, another milestone was hit. The average number of new people learning how to read and write jumped from 5 to 137 thousand a year. And finally, seven or eight years later, Unesco declared Venezuela a “territory free from illiteracy” after certifying the literacy of 1.7 million people (in less than 3 years).

“We can never tire from repeating the truths about our history that were hidden from us. We cannot allow the generations that follow us to be fooled as we were. And for that, reading and writing is a must, to multiply information,” Chávez said during the swearing-in of the presidential commission charged with the Misión Robinson literacy program.

Since then, nobody else approached me in banks asking me to fill their forms because “they’d forgotten their glasses at home” (the sweet excuse used by those who never learned how to read and write).

From Chávez’s hand, education (from kindergarten through university) became free; over one million Venezuelans (adults, seniors) got a high school degree through Misión Ribas; seven out every ten students received a laptop for free; the amount of teachers rose by 468 percent (from 70 thousand to 317 thousand); 44 public universities were launched; we became, in fact, the fifth country in the world with the highest number of university students per capita; and the third country in the region where people read the most.

Amidst this hurricane of successes, many of us fell in love with the man and the political project behind him… because that’s what Chávez was: a man with a will and an agenda, able to withstand enemy attacks. And not simply a product of a “$100 oil barrel” as some would have us believe. If it were that simple, any country with resources would be doing swimmingly, and we know that’s not the case.

In fact, while the international media used to say that Chavistas existed because they were “given money, cars, houses, etc,” many of us joined these ranks because these achievements gave us back the stolen dignity, let us to find out who we truly were, to dream about a real possibility of being better.

Today, when Chávez would turn 65, amidst a crisis and an economic siege, we should recall and defend his achievements, as absurd or difficult as it may seem. This must be done also if it means setting his policies apart from the current ones.

In this regard, we should recognize his mistakes (as Chávez used to do through his famous “self-criticism”), but not allow his track record and political vision to fade, nor his figure to be tarnished by the setbacks that stain or present, a present in which he’s not here to defend himself.

In fact, every time someone says “Venezuela is like this because of Chávez, or socialism,” we need to raise our voices, or we risk losing thousands of possible partisans for a better world.

French opera director and writer Michel Rostain, who lost his twenty-one year old son to deadly meningitis, used to say that “what dies is what you no longer remember, everything that’s remembered is still alive.”

However, maybe there’s something worse than being forgotten, which is to be remembered in a biased way.