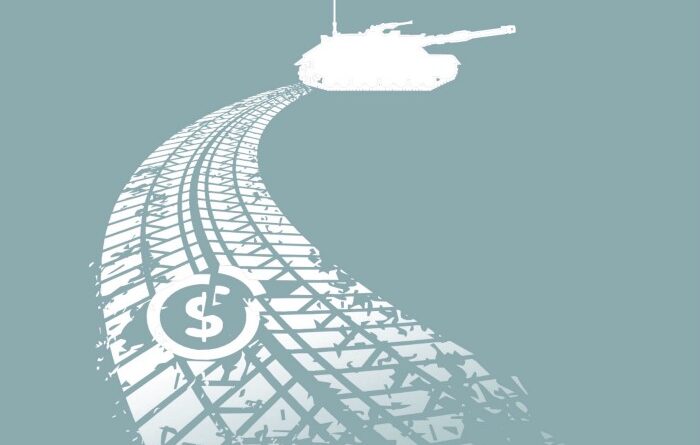 During the rise of capitalism, the bourgeoisie were a revolutionary class, in that they facilitated a mode of development which was vastly more effective at growing the wealth of society than feudalism was. Throughout late-stage capitalism, this dynamic of expanding capitalist material production is gone, replaced by a situation where the system is eating itself; in the 21st century, especially within the core of global imperialism the United States, the profits of the bourgeoisie largely rely on finance capitalism-the system which produces “wealth” not in a material sense but in an ephemeral sense.

The partisans of this self-cannibalistic system portray it as being as robust as it was during its initial stages, claiming that people’s general living standards and civilization’s wealth overall can be raised up by increasing corporate profits. But not only are the living standards of the masses being driven down by corporate interests (as they often were even during early-stage capitalism), but the wealth of the corporations themselves is losing its material foundation.

The global economy can’t lose over 400 million jobs within a year without the fortunes of the ruling class coming to rest far more upon financial fraud and arbitrary stock numbers. This is something that’s added onto the last half-century of the U.S. getting deindustrialized because of corporate trade deals and the privatization of public infrastructure, the proletariat getting more susceptible to mass unemployment because of neoliberal erosions of working class protections, and the rise of Big Tech and financialization making the economy less centered around increasing society’s material wellbeing. Online ad revenue, the mining and selling of data, real estate profiteering, and financial manipulations have taken on a bigger and bigger role in how our economy works.

As this has resulted in our current predicament of rapidly growing inequality and poverty, the source of material production that’s remained reliable for the U.S. ruling class is the war economy. At least this is true insofar as the military-industrial complex produces vast amounts of physical objects, which of course aren’t used to better the wellbeing of the U.S. working class (in fact, the government’s enormous investment in making them is forcing the masses to live under ever greater austerity). Only for the weapons contractors, private mercenary companies, and Big Tech elites who profit from the production of these objects there remains an uptick in wealth, one which is at least based in some form of material production.

This shows just how important it is for the ruling classes of the core imperialist countries, especially the U.S., to continue the perpetual war paradigm. The economy’s foundations have been hollowed out, making the fortunes of U.S. billionaires, despite having increased by $1.1 trillion in this last year, largely rest on illusory wealth aside from what the military-industrial complex produces. As economist Michael Hudson has written in The rentier resurgence and takeover: Finance Capitalism vs. Industrial Capitalism (an essay based on a chapter in his new book Cold War 2.0. The Geopolitical Economics of Finance Capitalism vs. Industrial Capitalism), late-stage capitalism has rendered much of this “wealth” not tied into an actual basis for wealth:

The fact that “paper gains” from stock prices can be wiped out when financial storms occur, makes financial capitalism less resilient than the industrial base of tangible capital investment that remains in place. The United States has painted its economy into a corner by de-industrializing, replacing tangible capital formation with “virtual wealth,” that is, financial claims on income and tangible assets. Since 2009, and especially since the Covid crisis of 2020, its economy has been suffering through what is called a K-shaped “recovery.” The stock and bond markets have reached all-time highs to benefit the wealthiest families, but the “real” economy of production and consumption, GDP and employment, has declined for the non-rentier sector, that is, the economy at large. How do we explain this disparity, if not by recognizing that different dynamics and laws of motion are at work? Gains in wealth increasingly take the form of a rising valuation of rentier financial and property claims on the real economy’s assets and income, headed by rent-extraction rights, not means of production.

As the rest of Hudson’s analysis shows, the vague sense I’ve been getting lately that rapidly growing amounts of our society’s “wealth” is fake is backed up by data. It’s no wonder why living standards in the U.S. and much of the rest of the capitalist world are dramatically falling; the very nature of late-stage capitalism makes the economy anemic, excluding increasing amounts of the population from the workforce while limiting the extent to which material goods can be produced.

And the imperial core’s consequential decision to lean onto the war economy-which during the “Great Reset” is becoming more intertwined with the high tech sector-is bringing this vulnerable setup closer to falling apart. Washington is waging a new cold war against Russia and China, motivated both by a desire to reassert imperial hegemony and by a growing obsession from U.S. tech elites with competing against China over AI, surveillance, and weapons technologies. And as Moon of Alabama wrote in 2019, this war, particularly the sanctions aspect of it, is driving the dollar closer to collapse:

The U.S. sanctions and sanctions and sanctions but never checked if sanctions work to the intended purpose. The efforts to sanction Russia have surely led to some unintended consequences. They are the reason why the alliance between China and Russia deepens every day. The U.S. has the exorbitant privilege of having its own currency being used as the international reserve. The sanctioning of U.S. dollar transactions is the reason why the U.S. is now losing it…Iran has taken comparable steps [to Russia in bypassing the dollar in international trade]. It now sells oil to China and India in either local currencies. Other countries will surely learn from this and will also start to use other currencies for their energy purchases. As the transactions in dollars decrease they will also start to use other currencies for their reserves. But the U.S. is not losing its financial or sole superpower status because of what China or Russia or Iran have done or do. It is losing it because it has made too many mistakes.

Now, after Covid-19 has helped reinforce an ongoing shift towards a multi-polar world and a depression has made U.S. GDP decline by almost a third, there are indications that the dollar will crash within a year. This is the prediction from economist Stephen Roach, who’s estimated that the dollar will drop in value by 35% by the end of 2021. The pushback against Roach’s claim has largely come from the position that there’s no viable alternative to the dollar, but recent trends in global currency reflect Roach’s vision (originally articulated last summer) about global powers giving up on Washington’s currency due to the increasing weakness of the U.S. economy.

Last month, in a piece which argued that the dollar’s recent slump is just the beginning of an unprecedented crash, Roach observed how “China’s yuan has appreciated about 4% since last June and should continue to strengthen as China leads the post-covid global recovery.” And in January, financial behaviors again reinforced this idea that the dollar’s crash is imminent, with the dollar’s purchasing power having dropped to a record low despite aggressive efforts to adjust the prices of goods.

This reflects the futility of the recent financial maintenance efforts of the Federal Reserve, which has stepped up its money-printing in this last year so much that over 40% of the U.S. money ever printed was created in 2020. Such damage control efforts aren’t effective in the face of the late-state capitalist trends which finance commentator Wolf Richter observed today: “at the lower 60% of the income scale, wages have barely kept up with the overall CPI (Consumer Price Index), but have not nearly kept up with the price increases deemed to be due to quality improvements. Consumers have responded to these price increases by buying fewer new vehicles, switching from new to used vehicles, driving vehicles for longer, from 8.9 years on average in 2000 to 11.9 years in 2020, and financing them for longer, with seven-year auto loans now being all the rage.”

The U.S. may still be the clear leader in international finance, but these are the unstable foundations this dominance exists upon. This sets up Washington for a major defeat in the great-power competition, since as Hudson explains, finance capital is the very thing the U.S. is trying to maintain through its cold war escalations:

Today’s New Cold War is a conflict of economic systems. As such, it is being fought against the dynamic of U.S. industrial capitalism as well as that of China and other economies. Hence, the struggle also is domestic within the United States and Europe, as well as confrontational against China and Russia, Iran, Cuba, Venezuela and their moves to de-dollarize their economies and reject the Washington Consensus and its Dollar Diplomacy. It is a fight by U.S.-centered finance capital to promote the neoliberal doctrine giving special tax privileges to rentier income, untaxing land rent, natural resource rent, monopoly rent and the financial sector. This aim includes privatizing and financializing basic infrastructure, maximizing its extraction of economic rent instead of minimizing the cost of living and doing business.

In this situation where Washington can’t reverse the trend towards multi-polarity, and where finance capital can’t sustain itself, such dynamics can only be maintained by turning imperialism inwards. When the dollar crashes, it will vastly further the current conditions of falling U.S. living standards, reactive war provocations, extreme upward wealth redistribution, and the leaning of U.S. capital onto the military-industrial complex and the high-tech sector. As one commentator predicted last year, “When the U.S. dollar collapses, the elites will try to steal your money,” with the U.S. ruling class being prepared to consolidate capitalism’s remaining wealth in the event of such a crisis. They’ll use austerity, privatization, wage cuts, and expansions of monopolies to intensify the paradigm of kleptocracy, snatching up whatever they can so that profits are kept up amid the evaporation of the economy’s foundations.

When we’re experiencing the fallout from this after the dollar’s crash, we’ll be subjected to absurd narratives which portray capitalism as still being revolutionary. Think tanks and corporate propagandists are selling the public what they call the “Fourth Industrial Revolution,” a campaign by intelligence operatives and Silicon Valley elites to integrate new technologies into society. We’ll be told to view this shift as a miraculous new era of expansion for capitalism, but really it will be the last stage of the system’s attempts to sustain itself through profiting off of the crises it’s created.

Featured image: Above: from the cover of “The War Economy”