Rodrigo Cabezas, the former Venezuelan Finance Minister under Hugo Chávez, who betrayed the revolutionary ranks years back, published a letter addressed to the “world left” in which he pointed to the government of President Nicolás Maduro and not to unilateral measures, called sanctions, as the cause and aggravating element of the economic crisis in Venezuela.

The 9-page missive of February 12, 2021, is entitled “Venezuela: the sound of the silence of the victims or the anti-imperialist alibi of the perpetrators.”

Cabezas, a Valera native raised in Zulia, wrote that the Bolivarian government is directly linked to corruption and migration. He also affirmed that the civic-military-police alliance puts the people in the position of “hostages.” He also exposed the alleged violation of human rights, while evading the existing evidence of crimes against humanity against the Venezuelan people, caused by the systematic blockade and sanctions. This was verified and confirmed by UN Rapporteur Alena Douhan on the effects of Sanctions on Human Rights a few day ago.

What else did the letter say?

He blamed Maduro’s administration for “devastation that the country had not known in the last 100 years in economic and social matters; as well as the eclipsing of democracy and freedom.”

The ex-minister’s criticisms started years ago. This time, he insisted that “There is no excuse to hide that the most frightening macroeconomic and humanitarian crisis in Venezuela began in 2014, under the full responsibility of the government of Nicolás Maduro.”

Jesús Rodríguez-Espinoza, founder and editor of Orinoco Tribune said in relation to this incident:”This letter along with similar criticism and statements from US financed NGOs like PROVEA or moderate anti-Chavistas like Enrique Capriles, seems to me to be related to an orchestrated attempt to put some dirt on the strong preliminary report presented by the UN Special Rapporteur last Friday, February 12. In it, Special Rapporteur Alena Douhan stated that there is enough evidence to demonstrate the criminal effects of European and US sanctions and blockade on the life of millions of Venezuelans.”

After the letter was made public, reaction on social media was immediate. Some tweeters described Cabezas as a traitor and reminded him that the current situation of decline in the country’s economy is due to the actions promoted by the self-proclaimed “interim president” of Venezuela, Juan Guaidó, with whom Cabezas had a meeting in September 2019, and again on February 2019, just days after former deputy Guaidó’s extraordinary self-appointment as president in place of Maduro. 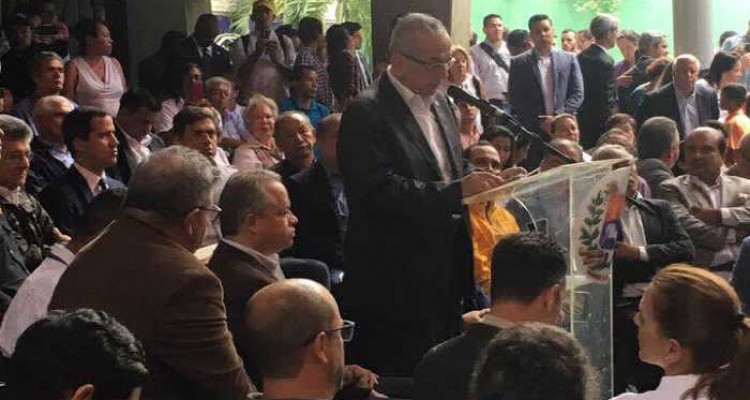 Meanwhile, Mario Silva, host of the TV show “La Hojilla,” replied in a thread of tweets to Cabezas: “‘Forgetfulness’ is a serious thing and it seems that Rodrigo Cabezas believes that we are idiots. To be able to blame others, you have to remember and Rodrigo, according to his hypothesis, ‘forgot’ that he was minister of finance. But, it is that human miseries shake hands and that is not aleatory,” remarked deputy Silva.

Other reactions came from those who recalled that, during his tenure in the Ministry of Economy and Finance, Cabezas predicted good news for the Venezuelan economy, while the opposite ended up happening. They also ask where are the fruits of his tenure in the ministry of such importance for the country?

“Every time one of these former ministers is interviewed, they order their writers—which are plenty—to bring Pilate’s punch bowl to wash their hands. That wise attack against inflation, when he faced it by drawing zeros on the bolivar in his battles against Paisa cheese,” wrote professor and MP Earle Herrera in his article, “Ministers of Pure Innocence,” referring in this case, to Rodrigo Cabezas.