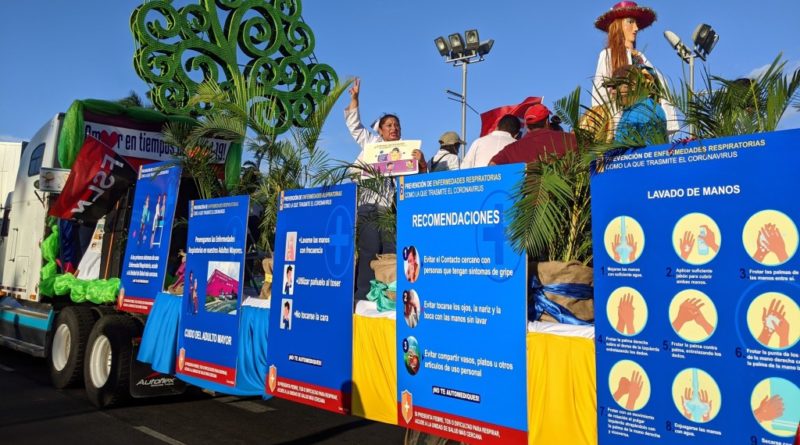 The US is still trying to overthrow the democratically elected president of Nicaragua who won with 72% of the vote – this time it is a Covid-19 related coup attempt. The US-led opposition is utilizing doctors instead of students to kill off Sandinistas by falsely claiming Sandinista doctors have died and by claiming that all deaths are from Covid-19 because they allege “the health system has collapsed.” 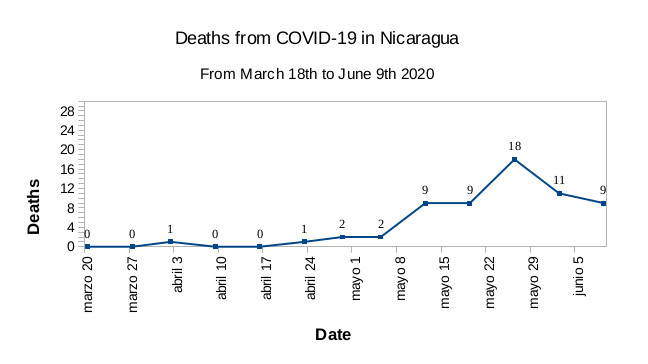 They learned well in the 2018 coup attempt that deaths are a necessity if you want a lot of favorable media coverage in the corporate press, as well as interest from readers. Macabre? Yes, but true.

In 2018, a brilliant young Nicaraguan, seeing what was happening, wanted to make an impact and began gathering data on the dead lists reported by so-called human rights organizations. Nicaragua, a country of 6.5 million has three fiercely opposition human rights organizations: Nicaraguan Association Pro Human Rights(ANPDH), Permanent Commission of Human Rights (CPDH), and the Nicaraguan Center of Human Rights (CENIDH). ANPDH was created in the 80s under President Reagan to attempt to whitewash Contra atrocities and has received US funding through the National Endowment for Democracy ever since. Another was founded earlier but has primarily received US government-related funding since the early 80s. The founder of The Nicaraguan Center for Human Rights, Vilma Nunez, has been anti-Sandinista since 1996 when she lost the FSLN party candidacy to Daniel Ortega in a primary. Since Ortega won the 2006 elections she has met multiple times with US embassy officials to conspire on how to get rid of President Ortega.

In his investigation titled: Monopolizing death: Or how to frame a government by inflating a list of the dead, Enrique Hendrix studied the lists of violence-related dead emitted by the human rights groups, read news articles about the deaths and investigated with the family members of the dead, and more. He found that many of the deaths were fabricated by including traffic accidents, suicides, death from illness, death from neighborhood fights, murder during a robbery, and an accidental firearm death.  The lists also included a number of people who were alive in the United States or Costa Rica. There is incomplete data on the dead in all the lists with the same person being recorded two or three times with slightly different names. “This is evidence of a campaign that, in the absence of a just cause, uses the death of every citizen as a motive to manipulate the emotions of the population in order to counterpose “the people” against “the people.

RELATED CONTENT: Trump Diverted $600 Million Stolen From Venezuelans for the Wall with Mexico

The US-led coup never really ended but calmed some until the Covid-19 Pandemic when they began to capitalize on the crisis by once again inventing deaths in order to try to create the narrative that Nicaragua’s government is incapable of dealing with the Covid-19 crisis.

They manipulate information and lie as part of a sustained campaign to promote panic among the population so that people will be terrified they are going to die.

An important part of the current coup attempt is the fabrication of false deaths as part of their national and international campaign against the government. They publish names of people they say are dead, who aren’t.

This is what happened to Dr. Guadalupe Joya and Rubén Darío Flores. Both were outraged to be killed off on social networks by the ‘Nicaraguan Medical Association’ a group invented during the 2018 attempted coup to create lies against the government.

“They have made a mess of their campaign against the government,” Dr. Flores told Radio La Primerísima. Flores has been a doctor for six years with two years of residency in orthopedics. He did have Covid-19 and was on bed rest but is back at work in the city of Jinotepe. Dr. Flores said that this defamatory campaign began May 19. In his Facebook post he wrote:

“Two days ago I died, according to groups and individuals who are dedicated to the creation, promotion, and dissemination of Fake News. I was called by family, friends, acquaintances, and patients (I appreciate their concern). False News doesn’t create anything good, and yet many are replicating it.”

The creation, promotion, and dissemination of false news should be considered a crime.

The “Nicaraguan Medical Association” used my photos and personal data without authorization. They seek to harm the Nicaraguan Health System and boycott the heroic work of the Health Workers. I stand in solidarity with those who have lost a loved one and I demand that the memory of their loved ones be respected.”

He posted his own video on Facebook to denounce the opposition lies and warns that he reserves the right to take his slanderers to court.

Dr. Guadalupe Joya denounced the criminal behavior of the “Somocistas” in spreading false rumors that she had died. Dr. Joya began years ago as a health worker in the German-Nicaraguan hospital in Managua where today serious Covid-19 cases are treated. Thanks to a scholarship from the Nicaraguan Health Federation, she studied to become a nurse. Later she got a medical scholarship and just finished her social service at the Yolanda Mayorga hospital in Tipitapa graduating in general practice.

Dr. Joya demanded that the ‘so-called’ ‘Nicaraguan Medical Association’ remove her name from their social media posts and says that otherwise, she will assert her legal rights. “They are playing with my image, they are making my mother sick because this false information of my death has scared the whole family, which is hurting me.”

The other tactic the US-led opposition uses is to claim all deaths are from Covid-19 to create panic among the population and have material for alarming corporate press articles alleging that the government is underreporting Covid-19 deaths.

On May 6 the relatives of Rebeca González demanded the Somocistas who post social media lies remove them. Rebeca’s mother, Socorro del Carmen Baltodano said “I want them to print the truth, that my daughter died of colon cancer. They can’t play with the feelings my family, that’s hard, it hurts too much,” she said. She demanded they remove social media posts that say her daughter died of Covid-19.

Omar Jose Gonzalez Rocha, 27, published a letter demanding respect for the memory of his father, Dr. Omar Gonzalez, who worked for many years at the Humberto Alvarado Hospital in Masaya. In his letter, he recalls that his father saved many lives within the health system, “How could they print the lie that he died of Covid.”  Dr. Elmer Vega Mendez also expressed his indignation at the lies being told about the death of his mother, Teresa Mendez – that she died of Covid-19.

Digna Potosme Nororis expressed her indignation on Facebook at the unscrupulous lies the opposition posted claiming her husband, Dr. Marco Enrique Zamura Amador died of Covid-19. “They took his photos and information from his Facebook profile without authorization to create fake news posts to try to discredit the Health Ministry. I want to clarify that he was never part of their ‘Nicaraguan Medical Association.’ He was a committed Sandinista, part of a Sandinista Medical Brigade and the Health Federation.”

The corporate media has followed the narrative of the US-led opposition from the beginning of the April 2018 coup without questioning or investigating their absurd allegations. The corporate articles pretty much reprint what is in the opposition Nicaraguan press, or they interview opposition members in the most favorable light possible, never asking one hard question. The same thing has happened with the Covid-19 Coup. There are articles in the international corporate press every day disseminating fake and distorted news.

It is quite likely that when it is all said and done Nicaragua will be recognized as one of the countries in the world that did the best job preparing for the pandemic, preventing community transmission and treating Covid-19 patients. By February 9 it had issued a joint protocol with the Pan-American Health Organization…setting out its strategy. At this early stage of the crisis, few countries outside Asia had done anything similar. 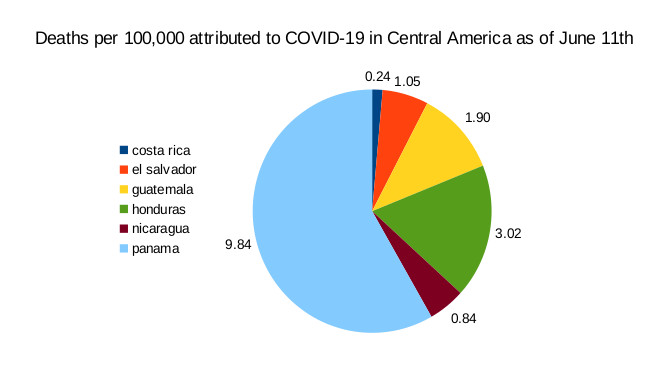 Included in its strategy were preparing 19 hospitals and nearly 40,000 health personnel to treat Covid patients. It had multiple virtual meetings with other countries to learn from them as part of their preparedness. Its nearly 160,000 trained volunteer health workers and health staff made more than 5 million home visits to educate about prevention and symptoms and to find ill patients. Nicaragua has an elaborate screening system at the borders and airport and sends everyone entering the country to quarantine. And, amazingly, the health ministry follows up with visits and phone calls. This, as well as detailed contact tracing, something that has barely been done in the United States, is how they were able to avoid community transmission for nearly two months between their first imported case on March 18 and mid-May. Nicaragua has a successful hotline for questions and for asking for help; it is disinfecting public transportation and markets as well as encouraging physical distancing, preventive measures in government buildings and supermarkets like testing temperature, requiring masks, making hand-washing stations and alcohol or alcohol gel a requirement as well as shoe washing.

Nicaragua has not called for a quarantine as a large percentage of workers are in the informal sector and if they don’t go out to work every day, they don’t eat and would end up dying from some other hunger-related illness.

Unfortunately, the US-led opposition will surely be on to a new strategy to falsely malign Nicaragua, and it will probably including killing people off as during the 2018 coup attempt and the 2020 Pandemic.

Nan McCurdy is co-editor of the weekly NicaNotes on AFGJ.org; works for the United Methodist Church through GYTTE in Puebla, Mexico; lived, worked and raised a family in Nicaragua for 31 years and returned to Nicaragua in March where she had first-hand experience with the Health Ministry’s Covid prevention and containment work. She is also a founder of Casa Baltimore-Limay and the Casa Ben Linder, both programs to build relationships between Nicaraguans and US citizens and to raise awareness about harmful US policy in Nicaragua.