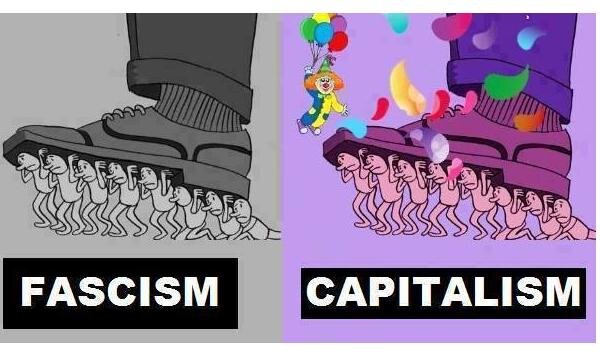 Europe and indeed the world is witnessing a resurgence of Fascism from the elections in Ukraine to Brazil Israel and America far right racists have growing control over the military industrial and financial sectors of their nations to include domestic and foreign policy.

In Brazil the rain forest is deforested by legal and illegal loggers while indigenous leaders and trade unionists are murdered by death squads as it continues to interfere in Venezuela supporting any and all attempted coups.

Israel continues to illegally occupy Palestinian territories while seeking to illegally annex the Westbank as it starves bullies and murders the people of Gaza and has begun to openly encourage Modi of India to turn Kashmir into Gaza mk2 while they bomb Damascus and support ISIS in Syria.

Fascism is an ideology of racial supremacy and or purity which is used to divide people along lines of ethnicity or colour race and or religion. Its purpose is to create a hierarchy of one sect over another.

Capitalism is an ideology which seeks to divide society through the pursuit of money to promote a capitalist sect over an impoverished underclass .Hoarding wealth and power in a small elitist click.

Imperialism and colonialism seeks to militarily subdue ethnic indigenous peoples in order to facilitate the extraction and theft of the natural resources of those people for the benefit of foreign capitalist and colonial usurpers.

What we are witnessing across the globe is the consolidation of capitalist corporate greed through colonisation military expansionist intervention exploitation regime change narratives and economic sanctions. A convergence of Fascism Capitalism Imperialism and Colonialism has but one aim.

To promote a ruling world elite by subjugation by division by exploitation and by eradication of the other.

Each of these extreme ideologies in themselves wreak havoc internally and externally causing poverty illiteracy premature death and brutality .Democratic – dictatorial governments oversee the continued inequality of wealth distribution.

In Ukraine we witness the rise of Fascism disguised as nationalism.

We witness how right wing zealots are promoted as Democrats.

We again see fascism being used as a tool internally to repress socialists and communists. Anti Russian propaganda is being presented as Ukrainian nationalism.

From the fall of the Soviet Union in 1991 America and it’s western capitalist cohorts of Britain and France have been engaged in promoting and encouraging fascist nationalism in all the former soviet republics to bring about further fractionalization of the old USSR to create opportunities for western capital to reap the rewards of privatisation in eastern Europe.

Their sole aim is to destroy any remnants of socialist policy in eastern Europe and to steal the wealth of these nations through the IMF World bank and EU loans to enslave the people in low paid non unionised insecure employment, to speculate on the price of property and impoverish the people ,all the while declaring the people are free

In the Ukraine the plan was simple

Encourage fascist nationalism, destroy the framework of government ,create tension on the streets ,unleash a violent fascist campaign ,watch society implode then impose a compliant non elected government chosen by the west through an illegal coup.

Indebt the country through military and financial loans then privatise and capitalise public property utilities and infrastructure then extract the wealth from the people who create it and give it to people who do not.

They did this by stealth by lies by financial inducement and political ambition.

Where they failed was when the people of Donbass and Eastern Ukraine refused to be governed by an unelected fascist coup.

The cruel inhuman murders in Odessa sent a chilling message to anyone who defied the Euromidan American Inspired regime change insurrection.

The people of Donbass Luhansk Donetsk Mauripol defended their rights as citizens to demand to live free from fascism, free from the coup, free to elect their own government either as part of a federal Ukraine or with full regional autonomy.

Their choice was stark .Live under Ukrainian nationalist oppression of their language culture and historical links with Russia or fight for their freedom.

Having been denied federalisation with in the Ukraine and having Ukraine soldiers militarily occupy their land and kill their people as the fascist coup strengthened its grip on centralised power and with fascists openly murdering fellow Ukrainians in the street the fight for not only self determination but survival began.

It started with unarmed men and women facing down tanks And ended with the partial liberation of Donbass and the birth of two new republics in Luhansk and Donetsk.

Having visited the region several times and met with trade union colleagues and representatives of the government I can only concur that freedom in the new republics was fought for by anti fascist forces in Donbass in 2014 and they have shown the world that resistance bravery and determination are the by words of liberty and justice.

You do not need to live under fascism if you fight for your freedom.