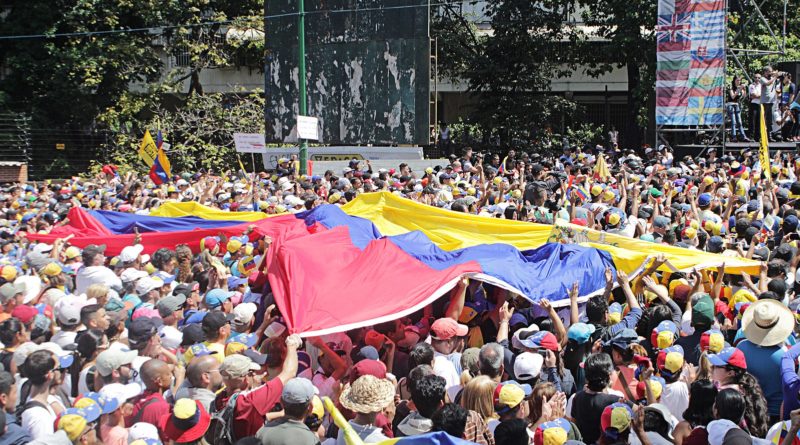 WHEN Attorney General William Barr announced indictments of Venezuelan President Nicolás Maduro and other high-level officials on charges of drug trafficking in March, it invoked memories of the US invasion of Panama in 1989.

At the time, the foreign intervention resulted in the capture of President and General Manuel Noriega.

Noriega would be tried in the US and convicted on racketeering and drug trafficking charges, for which he served a life sentence in the US and Panama.

Most analysts ultimately discounted the likelihood of an invasion of Venezuela, but Scott Ritter, chief weapons inspector of the UN in Iraq between 1991 and 1998, warned that “the US has taken an irreversible step that signals no future of Maduro and other named officials. Simply put, the US never walks away from a narcotics indictment.”

The Justice Department’s action signaled that Washington expects Maduro and his entourage “to either be killed in a coup, overthrown through US military action and/or arrested and imprisoned in the US. There are no alternatives.”

RELATED CONTENT: How Western Media Confines US Imperialism to the Past

In April, the United States Southern Command threatened Venezuela was a massive show of force off its coastline. On May 5, a failed raid organized by Silvercorp, a mercenary company that has provided security at President Trump’s rallies, took place.

Three weeks later the Maduro government purchased from five tankers full of desperately needed fuel from Iran, a defiant challenge to Washington’s unilateral sanctions and hegemony in its “backyard.”

Russia and China made clear that they supported the right of the two countries to trade with one another, which is why Washington blustered but made no move to stop the tankers.

President Trump and his Latin American allies have sought to undercut all efforts at negotiation.

Their strategy until the indictments had been to induce Venezuelan military officers to abandon Maduro by dangling incentives, such as the lifting of sanctions and reconstruction aid.

With Maduro out, their plan was for the opposition-controlled National Assembly to form a Council of State headed by self-proclaimed ‘Interim President’ Juan Guaidó to run the country until new elections.

The SouthCom manoeuvres of April constituted “one of the largest U.S. military operations in the region” since the Panamanian invasion.

Forces mounted within eyesight of the Venezuela coastline included the Southern Fleet, AWACS surveillance aircraft and mobilization of ground forces. Twenty other country participated, and the scale and sophistication of weaponry and forces deployed was unprecedented for the Caribbean. On June 1, 800 Special Forces troops were dispatched to Colombia.

The pretext for the exercises and deployment was interdiction of narcotics trafficking, but a recent study using the U.S. interagency Consolidated Counterdrug Database shows that Venezuela is not a primary transit for cocaine trafficking to the U.S. Venezuela may be rife with organized crime and corruption, said the authors, but “the true extent of drug trafficking is often magnified by actors who suggest that a negotiated, democratic solution in Venezuela is impossible.”

The Silvercorp mercenaries mounted an absurd operational plan, but it is quite likely that U.S. Intelligence Services and administration policymakers for Latin America were aware of their plans. Secretary of State Pompeo issued a “non-denial” denial of “direct US involvement.”

Juan Guaidó, the self-proclaimed Interim President of Venezuela, met in early February with Trump at the White House and accompanied him to the State of the Union Address.

An invasion targeting Maduro in Caracas would likely produce casualties exceeding those of the Panama operation, estimated to have caused 500 to 1000 deaths.

Unless killed in the initial fighting, Maduro would likely recluse himself in Miraflores Palace in downtown Caracas or in nearby Fort Tiuna.

Miraflores is within walking distance of the massive poor barrios of western Caracas, long a redoubt of government support.

Fort Tiuna is a multi-purpose military base, further from the barrios but well-defended and still within the heart of the Caracas metropolitan area, a densely populated valley where overall three million Venezuelans live.

During internal debates about intervention in the Balkans, General Colin Powell once reportedly warned: “We do deserts, we don’t do mountains.”

90 percent of Venezuela’s 30 million people live in Caracas and other densely populated cities embedded in the northern coastal mountains, including strategic Maracay, home to the most important military base in the country.

Further west is Maracaibo, not far from the Colombian border. Colombia’s right-wing paramilitary forces might see a US attack on Caracas as a signal to move openly into the region, which could easily touch off a wider conflagration.

Venezuela has a vast, underpopulated interior, with highly porous borders with Brazil and Colombia, marked by rivers that shift course from one rainy season to the next.

For centuries the interior has been a hospitable territory for irregular bands of fighters, and it may become so again if the U.S. invades.

The Pentagon seems less than enthusiastic about the prospects of sending troops into a hotbed of the Covid-19 pandemic disrupts capabilities, but the Trump administration hardliners may see their chances for regime change slipping away.

Mr Guaidó has all but exhausted his usefulness for regime change, and after November the ‘on the table’ military option might be taken off.

Despite the difficulties of a military invasion, Trump may see in Venezuela an opportunity to burnish his image and re-election chances.

New Yorker writer Adam Entous told NPR’s Terry Gross that the military strike that killed Iranian General Qassem Soleimani in January was designed not only to intimidate the Iranians but “maybe for political purposes in the United States.

“[Trump] wants to be seen as somebody who is extremely tough, that uses the military in this kind of very aggressive way. And, you know, this is a decision that took people in the business by surprise.”

Congress must warn the President that Venezuela cannot be another Panama.

The military option needs to be taken off the table. Now.

Daniel Hellinger is Professor of International Relations at Webster University and is currently working on the third edition of his text, Comparative Politics of Latin America: Can Democracy Last?