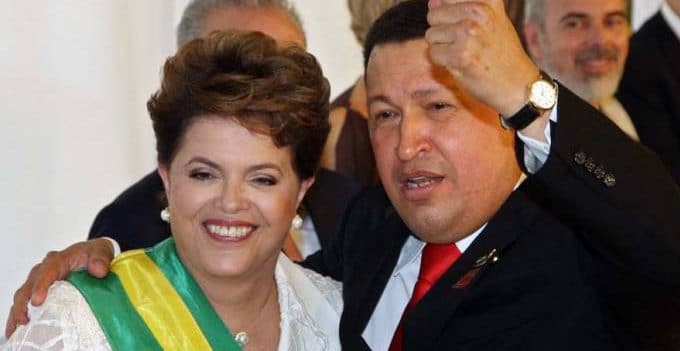 Paralysis Of The Present.

Venezuela demonstrates the Western media tendency to ignore and erase US imperialism in the present day, only to acknowledge it in hindsight, when it is already too late and the damage is done. This is especially true in Latin America, not least in Brazil, where the US role in the 2016 coup against Dilma Rousseff and the election of Jair Bolsonaro has been barely acknowledged, even by ostensibly progressive journalists.

“Many of the newspapers that – years after the fact – have found the nerve to condemn past episodes of US imperialism have not yet mustered the same reproach for US intervention in Venezuela.

The present, it seems, has paralysed their capacity for critical analysis. Despite enormous historical precedent, Western journalists fail to see that what is happening now has happened before – time and time and time again.

In some decades, they may go through the archives and profess their horror at the true nature of US foreign policy in Venezuela. But by that time, it will be far too late. As they scramble to recover shreds of their professional integrity, the damage to Venezuela will be long done.

Holding the powerful to account in the past but not the present allows Western imperialism to continue. Everyone’s a winner; Western intervention goes unchallenged while the media retains ‘respectability’ with futile ‘critical’ hindsight.” – John McEvoy

Imagine you’re taken to Venezuela, but you’re never told where you’re going nor – once you arrive – where you are. You spend a week there with zero exposure to the corporate media (lucky you!). After one week, you’re finally told that you’re in Venezuela, and the media’s coverage of the country is revealed. In total contrast to what you’ve seen, you’re told that Venezuela is a dictatorship clinging to power through government-friendly armed gangs while the Venezuelan people starve to death on the streets. Have your senses totally failed you? Or is something horribly wrong with our media?

The latter, it seems, is correct. Because what I saw on the ground in Venezuela revealed a horrifying gap between reporting and reality.

“Venezuela has fallen to a dictator. But we can help to restore democracy.” – the Guardian, 23 May 2018

Venezuela has been recognized by independent international observers to hold some of the world’s freest and fairest elections. On the ground, opposition supporters are largely free to organize anti-government protests and insult the president’s mother(when they can be bothered to turn up, that is). Not so much can be said for Emmanuel Macron’s France, for example.

Venezuelan opposition leader Juan Guaidó – who has invited foreign military intervention into his country and declared himself president for over three months – now relies on protection from security forces of the ‘dictatorship’.

I have spoken to various Venezuelan dissenting voices on public transport, parks, and bars. They don’t seem afraid to criticize their government openly. In US- and UK-allied Colombia, meanwhile, social activism is consistently punished with murder; and people often speak of ‘socialism’ or ‘communism’ in hushed voices – even when nobody’s around.

As Alan MacLeod wrote, moreover, “the “not free” governments that Washington supports… are rarely if ever labeled as dictatorships by the establishment press”. The Guardian, for instance, once described Saudi crown prince Mohammed bin Salman as “a risk-taker with a zeal for reform”.

“People are starving in Venezuela. There isn’t enough food… The result is a humanitarian crisis.” – NPR, 20 March 2019

There is undeniably suffering in Venezuela. Many poor Venezuelans I met, however, plainly laughed at the idea that “there isn’t enough food” and that there is “a humanitarian crisis” in Venezuela. In one of Venezuela’s poor neighborhoods, one Venezuelan was so motivated to refute these narratives that he knocked on locals’ doors to ask: “Are you starving?”; “Is there a ‘humanitarian crisis’ in Venezuela?”. I felt that was in somewhat bad taste. But those in the area were all-too-happy to respond. Many laughed. One person responded: “I’ve already eaten four meals today” – it was before 2 pm. Some local children looked blankly confused at our questions, saying: “Why would we be starving?”

On the streets of Caracas, it is rare – relative to the streets of London or Bogotá – to find somebody eating from the trash. It is even rarer to find homeless people.

“Venezuela crisis: a health system in a state of collapse” – BBC, 8 February 2019

The emotionally provocative scenes in the BBC’s short documentary on Venezuela’s health system (inadequate treatment, expensive medicine, poor hygiene) are not unimaginable in the US health system. The BBC also showed just one hospital, which seemed to be in a far worse condition than the hospital and doctor’s surgery I visited.

Like many reports on Venezuela’s health services, it also lacked critical context regarding US economic sanctions, which have both restricted vital medical imports and the Venezuelan government’s ability to maintain basic services. Moreover, the survival of Venezuela’s health system is largely dependent on local community participation, which we will come to now.

“Colectivos [are] gangs loyal to autocratic President Nicolas Maduro… They terrorized thousands who tried to usher humanitarian aid into the hungry nation from Colombia, brutalizing them within a block of an international bridge where food and medicine were waiting.” – Bloomberg, 26 February 2019

“’We want to plunge the depths of the pro-Maduro supporters.’ But Dobson said NPR’s responsibility to keep its journalists and sources safe is the top priority, and reporting safely from Venezuela is extremely difficult” – NPR, 9 April 2019

Put simply, reporting safely from Venezuela is not extremely difficult. It takes little effort to leave the house, walk down the street, and speak with any of the overwhelmingly friendly Chavistas (government supporters) across the country. In fact, they are particularly keen to speak to Western journalists because coverage of their country has been so poor.

NPR’s article reflects much of what is wrong with the Western reporting of Venezuela. Scared of the “depths” of the government’s support base, journalists largely fail to speak to these ordinary Venezuelan people. That is then reflected in their reporting.

Why Are We Talking About This?

The articles highlighted are not irregularities; they reflect the media’s general representation of Venezuela. So we must ask: ‘Would the media be so invested in the well-being of Venezuela’s population and democracy were the US not orchestrating a coup in the country?’ The answer is, categorically, no. The corporate media’s interest in the well-being of a foreign population seems directly proportionate to the West’s interest in overthrowing its government. Meanwhile, as FAIR’s Adam Johnson points out, the corporate media’s “editorial standards are inversely proportional to a country’s enemy status”.

This is how the corporate media takes its cue from the US state department and proceeds by creating false pretexts for intervention through lopsided and disingenuous reporting.

The Paralysis Of The Present

Many of the newspapers that – years after the fact – have found the nerve to condemn past episodes of US imperialism have not yet mustered the same reproach for US intervention in Venezuela.

The present, it seems, has paralyzed their capacity for critical analysis. Despite enormous historical precedent, Western journalists fail to see that what is happening now has happened before – time and time and time again.

In some decades, they may go through the archives and profess their horror at the true nature of US foreign policy in Venezuela. But by that time, it will be far too late. As they scramble to recover shreds of their professional integrity, the damage to Venezuela will be long done.

Holding the powerful to account in the past but not the present allows Western imperialism to continue. Everyone’s a winner; Western intervention goes unchallenged while the media retains ‘respectability’ with futile ‘critical’ hindsight.

If journalists can learn anything from Iraq, it must be this: it is not good enough to challenge powerful interests once many hundreds of thousands of people have died. So dramatically closing the gap between reporting and reality is a matter of great urgency.

This article was originally published at the Canary in April 2019. Republished and adapted with permission.

Featured image: Dilma Rousseff with Hugo Chavez during the inauguration, Brasília. By Adriano Machado for AFP and VEJA.