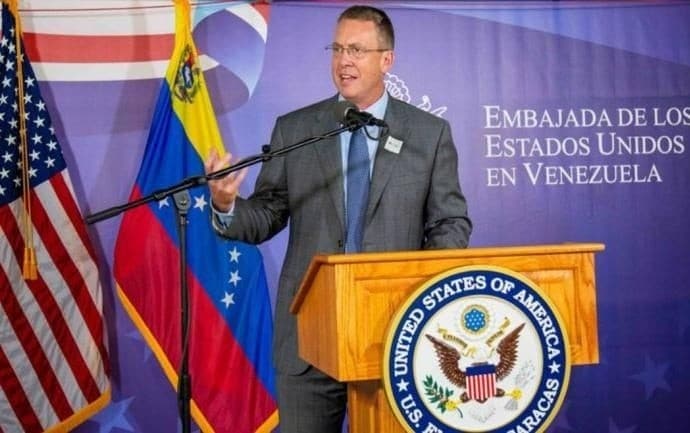 It remains unclear whether the new Venezuela Affairs Unit will facilitate talks with Caracas.

Philadelphia, August 28, 2019 (venezuelanalysis.com) – The Trump administration announced Wednesday the opening of a new section in its Bogota embassy dedicated to US interests in Venezuela.

The so-called Venezuela Affairs Unit (VAU) will be directed by Charge d’Affaires James Story, who previously headed the US embassy in Caracas.

According to a State Department press statement, the VAU will act as Washington’s “mission to the legitimate Government of Venezuela,” in reference to National Assembly President Juan Guaido.

The opposition leader swore himself in as “interim president” of Venezuela on January 23 and was immediately recognized by the Trump administration and its regional allies.

It remains unclear whether the VAU will serve as a conduit for negotiations with the Maduro government. Last week, Maduro confirmed he had authorized secret talks with White House officials, which he said had been ongoing for “months.”

The State Department’s announcement comes on the heels of self-proclaimed “Interim President” Juan Guaido discarding further talks with the government in the near future.

“There’s no date for a new round of negotiations,” Guaido told press on Tuesday after a session of the opposition-controlled National Assembly.

Meanwhile, the lawmaker said in an interview with the AP last week that the opposition would boycott early legislative elections which the Maduro government is proposing for early 2020 in lieu of their traditional December date. Guaido likewise vowed to remain as “interim president” beyond the expiration of his one-year term as National Assembly president in January 2020.

The Venezuelan government and the opposition had held several rounds of dialogue mediated by the Norwegian government, first in Oslo and then in Barbados. No details on the contents of the talks were disclosed, with the topic of elections reportedly left to the end.

President Nicolas Maduro called off a new round of talks in early August following the US imposition of a sweeping embargo against Caracas.

Foreign Minister Jorge Arreaza said that Maduro had put the talks on “pause” and that the government had not abandoned dialogue. Norwegian mediators have reportedly held meetings with both sides in Caracas with the goal of restarting negotiations, while the opposition team visited with US officials for consultations.

Washington escalated its sanctions against Caracas since recognizing Guaido in late January, targeting key sectors such as banking, oil, as well as the country’s food import program. On August 5, a new executive order upgraded the sanctions regime to an embargo, blocking all Venezuelan assets in US territory and threatening broad secondary sanctions against persons and entities engaged in dealings with the Venezuelan state.

Featured image: Former ambassador to Venezuela James Story will head an “interests section” dedicated to Venezuela in the US embassy in Bogota. (Archive)