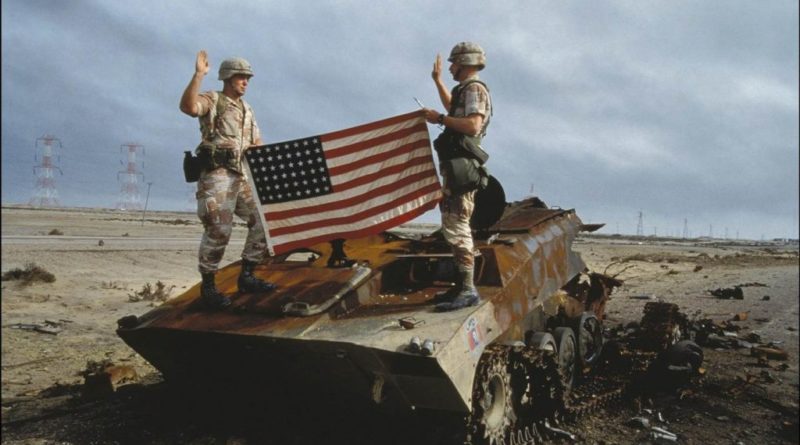 Iraq’s parliament and prime minister have asked the U.S. to end its 16-year occupation of their country. The Trump regime, which claims it wants to “end forever wars,” is refusing to bring them home. It is instead sending more troops, ships and planes to the region.

On Jan. 5, Iraq’s elected parliament passed a resolution calling for U.S. troops to leave. Trump responded by threatening the war-torn country with “sanctions like they’ve never seen before.” He also demanded Iraq reimburse the U.S. military for the costs of the U.S. bases there.

State Department spokesperson Morgan Ortagus said U.S. troops in Iraq are “a force for good” and would not leave. “At this time, any delegation sent to Iraq would be dedicated to discussing how to best recommit to our strategic partnership — not to discuss troop withdrawal, but our right, appropriate force posture in the Middle East,” she said.

Ortagus repeated the Trump regime’s pretext for keeping U.S. troops in Iraq and Syria — the fight against ISIS. But on Jan. 3, in a cowardly sneak attack, the U.S. Air Force murdered two leaders of the fight against ISIS and al-Qaida in the region — Gen. Qassem Soleimani of Iran’s Islamic Revolutionary Guard Corps (IRGC) and Abu Mahdi Muhandis, deputy chief of Iraq’s Popular Mobilization Units (PMU).

In reality, the U.S., Israel and Saudi Arabia have covertly armed and funded ISIS, al-Qaida and other terrorist organizations in Syria and in Iraq. The Syrian Army, Iraqi Popular Mobilization Units, Iranian Revolutionary Guards, the Lebanese Resistance and Russia have borne the brunt of the fight against them. While U.S. troops occupy Syria’s oil fields, the Trump regime has openly authorized large arms shipments to al-Qaida forces holding the Syrian city of Idlib.

Soleimani was on peace mission

The two commanders were assassinated on Iraqi soil at Donald Trump’s orders. Gen. Soleimani had landed in Iraq to meet Prime Minister Mahdi.

It was a peace mission. The Iraqi prime minister was trying to reduce tension between Iran and Saudi Arabia. That is something the Trump oil-money regime does not want to see happen.

The assassination of two leaders of countries with which the U.S. isn’t at war is a crime under international and U.S. law. It is “a crime against peace,” the highest level of war crime.

At a Jan. 8 press conference, Trump appeared to back down from a direct military attack on Iran. For now. However, he made clear that the U.S. siege against the Iranian people will intensify. That includes new economic sanctions against the oil-rich country, hitting its mining, construction, manufacturing and textile sectors.

Sanctions are siege warfare. Tens of thousands of Iranians have already died from U.S.-imposed sanctions, which seriously hurt the country’s health care system.

Reflecting broad anti-war sentiment in the U.S., the Democrat-controlled House of Representatives passed a resolution restricting Trump’s war-making powers. It will likely die in the Republican-controlled Senate. Trump had stated that his tweets constituted legal notification for Congress of U.S. military action.

Leading Democrats had castigated Trump last year when he pretended to withdraw U.S. troops from Syria. On Dec. 12, 188 Democrats joined the GOP in voting for Trump’s $788 billion war budget.

Gen. Soleimani’s three-day funeral, held in several cities, was one of the largest in history. Millions turned out to honor him, not only in Iran, but in Iraq, Lebanon, Syria and Yemen. Christian churches held masses in his honor. Leaders of Iran’s Jewish community visited Soleimani’s family.

Soleimani is a hero across the region for organizing resistance to the U.S.-Israel-Saudi axis and its wars in Iraq, Lebanon, Palestine, Syria and Yemen. In a rare interview on Oct. 19, Soleimani revealed he had served in Lebanon during the 2006 Israeli invasion.

Before Gen. Soleimani was laid to rest, the Iranian Revolutionary Guard Corps fired a farewell salute of rockets at two U.S. military occupation bases in Iraq. Yemeni Resistance forces hit a U.S.-Saudi base the same day.

Iran’s Ayatollah Ali Khameini described the rocket attack, which destroyed planes and buildings, as “a slap in the face” to U.S. imperialism. ”What is important about confrontation is that the military action as such is not sufficient,” Ayatollah Khamenei continued. “What is important is that the seditious American presence in the region must end.”

Iranian air defenses were on high alert after repeated threats from Washington. On Jan. 5, Trump tweeted, “We have targeted 52 Iranian sites … some at a very high level & important to Iran & the Iranian culture, and those targets, and Iran itself, WILL BE HIT VERY FAST AND VERY HARD.”

Iranian President Hassan Rouhani and Iranian military commanders have taken responsibility for the tragedy. The officer who ordered the shootdown and others will be prosecuted.

This is a very different attitude than that of the U.S. government. On July 3, 1988, the U.S. guided missile cruiser Vincennes shot down Iran Air Flight 655 off the coast of Iran. All 290 aboard died.

Capt. William Rogers III, who ordered the massacre, suffered no consequence. President George H.W. Bush said, “I will never apologize for the United States — I don’t care what the facts are. … I’m not an apologize-for-America kind of guy.”

Trump and the U.S. military deliberately created the state of war in which this tragedy happened. The blood is on their hands. The 176 deaths must number among the millions of casualties caused by Washington’s wars in the region. We cannot allow this tragedy to be a pretext for further attacks on Iran.

Trump’s Jan. 8 press conference was filled with lies and threats. He opened by saying, “Iran will not be allowed to have a nuclear weapon.”

The U.S. has 4,018 nuclear weapons. Trump has announced plans to build more. The U.S.-armed and U.S.-funded Israeli settler state has a “secret” stash of nuclear weapons, perhaps as many as 400.

Iran has long pledged not to develop the bomb. In May 2018, the U.S. pulled out of the Joint Comprehensive Action Plan that the Obama administration had signed with Iran, Britain, China, France, Germany and Russia. The JCPOA limits Iran’s production of enriched uranium, even for peaceful purposes. On Jan. 5, after the Soleimani assassination, Iran withdrew from the agreement.

Trillions for war, nothing for Puerto Rico, the disabled, the hungry or veterans

“The American military has been completely rebuilt under my administration, at a cost of $2.5 trillion,” Trump bragged. “U.S. Armed Forces are stronger than ever before. Our missiles are big, powerful, accurate, lethal, and fast. Under construction are many hypersonic missiles,” he went on. Trump also called for expanding NATO — the North Atlantic Treaty Organization — into the “Middle East.”

Trump also repeated the lie that the Obama administration “gave” Iran $1.8 billion to sign the JCPOA. That money was Iran’s own, held by the U.S. for nearly 40 years. Stolen from the Iranian people, it was stashed by the U.S. puppet shah in Wall Street banks before the 1979 Revolution. Some of it had been paid by the Shah for U.S. arms shipments that the Islamic Republic canceled.

The Shah of Iran was restored to Iran’s throne in 1953 after a CIA-orchestrated coup overthrew popularly elected Prime Minister Mohammed Mossadegh. During the next 25 years, his tyrannical regime became Chase Manhattan Bank’s largest depositor and the best overseas paying customer of the U.S. military-industrial complex. When the 1979 Revolution chased the shah off his throne, the Carter regime in Washington froze Iran’s money.

No more blood for monopoly profits

U.S. wars and sanctions have wrought havoc and destruction from Afghanistan to Yemen, from Iraq and Syria to Palestine and Libya. They are a desperate and futile attempt to control and restrict the world energy supply in the interests of U.S. banks and corporations, to keep the wealth of the world flowing into their coffers and maintain their position in the world economy.

Endless war is also a pretext to plunder working-class and oppressed people here to support a bloated, parasitic military-industrial complex.

The people of Iraq, Iran, Syria and the entire region have made it clear that they do not want U.S. troops on their land or U.S. ships in their waters. They are demanding that the U.S. leave. We need to build a mass people’s movement here to support their just and righteous demand.