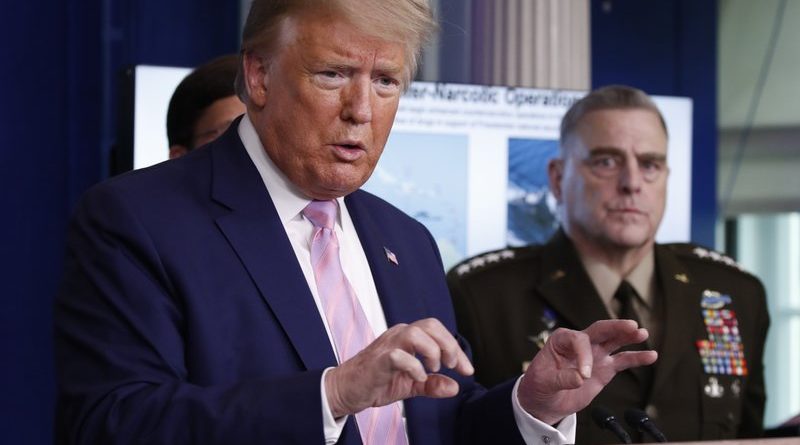 Venezuela denounced an attack on one of its naval vessels in recent days.

Mérida, April 2, 2020 (venezuelanalysis.com) – The Trump administration is dispatching US Navy warships to the Caribbean Sea in an effort to turn up the pressure on Venezuela.

The initiative was announced by President Donald Trump and other high ranking officials in a press conference Wednesday.

The move is allegedly part of a wider “anti-narcotics” operation in the region, which in addition to Navy destroyers will reportedly involve AWAC surveillance aircraft and on-ground special forces units. The Associated Press reported that the operation is one of the largest in the region since the 1989 invasion of Panama.

“We must not let malign actors exploit the [coronavirus] situation for their own gain,” Trump said.

The military deployment came on the heels of the Department of Justice (DoJ) levying “narco-terrorism” charges against top-ranking Venezuelan officials, as well as a “democratic transition” plan unveiled by the State Department.

On March 26, the DoJ accused President Nicolas Maduro, National Constituent Assembly Diosdado Cabello and several other officials of conspiring with FARC rebels to “flood” the US with cocaine.

Critics have pointed to the dearth of concrete evidence implicating top Venezuelan leaders and to the fact that data from US agencies shows that only a small fraction of drug routes pass through Venezuela, with most cocaine entering US territory via Central America and Mexico.

On Tuesday, the State Department unveiled a “framework for a peaceful democratic transition in Venezuela,” calling for Maduro’s resignation and the establishment of a transition government headed by opposition and Chavista officials to oversee new elections.

The Trump administration pledged to lift sanctions against Venezuelan individuals and key economic sectors, but only after Maduro left office and all security agreements with Russia and Cuba were terminated.

The US has vowed to ramp up unilateral sanctions until the Maduro administration accepts the deal.

For its part, the Venezuelan government blasted the military deployment, with Communications Minister Jorge Rodriguez calling it “an attempt to attack Venezuela with lies and threats.”

Rodriguez added that Venezuela has “robust” anti-narcotics policies and would be ready to “coordinate” actions against drug trafficking in the region.

Washington’s naval operation comes days after the controversial sinking of a Venezuelan coast guard boat off the coast of the Caribbean island of La Tortuga.

According to the Venezuelan Ministry of Defense, the patrol ship “Naiguata” located a Portuguese cruise ship, the “RCGS Resolute,” in Venezuelan territorial waters and ordered the vessel to accompany it to port. The “Resolute” allegedly refused the instructions and proceeded to ram the “Naiguata,” which subsequently sank as a result of the impact.

The cruise ship owner, Columbia Cruise Services, has disputed this account, insisting that the “Resolute” was “subject to an act of aggression by the Venezuelan Navy in international waters,” while carrying no passengers.

On Wednesday, Venezuelan President Nicolas Maduro suggested the ship “was being used to transport mercenaries.” He also claimed that “someone from the north called” to prevent Dutch authorities from inspecting the “Resolute” at its current mooring in the Curacao port of Willemstad.

Portuguese Foreign Minister Augusto Santos Silva, for his part, has pledged to collaborate with Venezuela and Holland in the investigation of the “unfortunate” incident

Featured image: US President Donald Trump a military deployment to the Caribbean Sea on Wednesday. (AP)