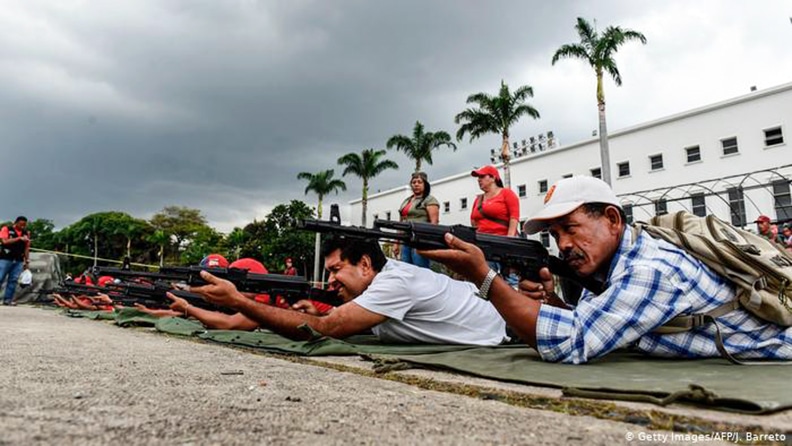 A US-sponsored military aggression against Venezuela could take place before the November 3 elections in that country. On August 22, Admiral Remigio Ceballos, chief of the strategic operational command of the Bolivarian National Armed Force (FANB), said that “The international intelligence agencies allied to Venezuela inform us that Colombia is preparing an aggression, and the FANB will respond with force and forcefulness to any aggression against the sovereignty and independence of Venezuela, under the command of our Commander in Chief Nicolas Maduro Moros”.

“We are in the presence of a Colombian government that has attacked Venezuela the most in all our history,” he added. Ceballos also wrote on Twitter: During the year 2000, Plan Colombia was installed with 7 U.S. military bases in that country “to prepare its aggression against our nation and the entire region”. Days before, Samuel Moncada, Venezuela’s ambassador to the UN denounced; “Washington’s propaganda bodies already promote the invading multinational force in Venezuela … it must be with military occupation but without the visible presence of the United States in the front line. It is the armies of Colombia and Central America that will do the dirty work”. In another message, Moncada pointed out that the “final phase” of aggression against Venezuela, whose campaign of maximum pressure… is already underway, is moving to the military dimension. “They are looking for the ‘October surprise. In Venezuela we must prepare ourselves for the provocation in the making”. In another tweet, the Venezuelan representative in the UN showed a fragment of the article of the conservative website Washington Examiner, where the insinuations of the chief of the US Southern Command, Admiral Craig Faller and Phil Gunson, of the International Crisis Group, about an eventual invasion against Venezuela. According to the publication, in a seminar convened by the toxic Atlantic Council, Faller expressed, “The key is in how we can better share intelligence and how the international community can be more influential to force and change Maduro’s behavior and that of the “external state actors”, in obvious reference to Cuba, Venezuela and Iran.

RELATED CONTENT: Venezuela’s Arreaza and the Canadian Public Call for No Military Operation Against Venezuela

Coinciding with this, they met in Bogotá with President Iván Duque, Faller together with Robert O’Brien, national security advisor to the White House, his deputy for Latin America, the Cuban-American Mauricio Claver-Carone, archenemy of Cuba and Venezuela and Trump’s candidate for president of the Inter-American Development Bank, and US ambassador to Colombia, Phillip Goldberg. The Colombian bowed down and announced that it would review “issues of security, the fight against drug trafficking, ‘the situation in Venezuela’ and the immigration of citizens from that country to Colombia. Washington’s cynicism goes so far as to accuse Venezuela of drug trafficking while its main ally in the region, Colombia, produces 90 percent of the world’s traded coca.

For its part, the Mexican website La Politica Online states that Cuban-American Senator Marco Rubio is agitating Trump’s campaign to convince the president to invade Venezuela in order to get Florida’s 29 electoral votes: Members of the Republican war room working to line up the Latino vote recently commented that, in at least two meetings, Rubio expressed himself in favor of a military action in South America in order to secure Florida’s votes in the Electoral College in November.

Fundamental antecedents reinforce the possibility that the aggression would be directed at Venezuela. First of all, President Donald Trump’s fixation with the South American country and its splendid natural resources, which has led him to ask military chiefs of the Pentagon about the feasibility of attacking it directly with US forces along with the enormous and incessant subversive attack and economic war it maintains against it. But, in addition, there is the fact of his current unfavorable situation in the polls, which if it continues, or worsens, could lead to the Democrat Joe Biden evicting him from the White House. U.S. presidents who have wanted to be reelected have increased their sympathy among voters by resorting to the so-called “October Surprise,” a military adventure that allegedly brings the country together around the commander in chief.

During the Donald Trump administration, military and paramilitary actions against Caracas organized from Colombia under the direction of Washington have not ceased. Among them the failed attempt to assassinate President Nicolas Maduro and the high political-military command of the Bolivarian Revolution on August 4, 2018, the defeated coup attempt of April 30, 2019, and the dismantled maritime invasion, with the participation of US mercenaries, in May 2020, called Operation Gideon. This was planned through a contract signed between the self-proclaimed Guaidó and the mercenary chief and former Green Beret Jordan Goudreau.