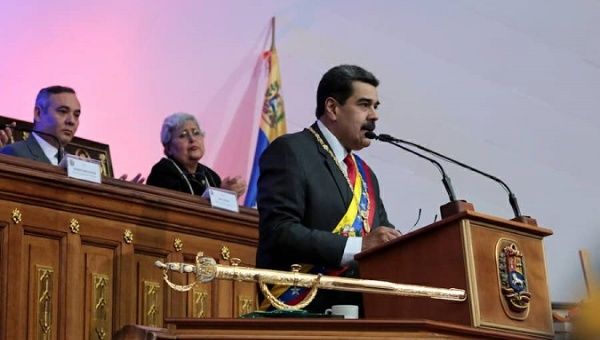 At the annual Address to the Nation issued from the National Constituent Assembly (ANC) in Caracas, Venezuela’s President Nicolas Maduro began his accounting of the 2019 economic and political situation, highlighting that the United States had failed flatly in its attempt to break the Bolivian nation’s revolutionary will.

“Washington’s final attempted assault against Venezuela failed,” Maduro said and explained that “the Empire tightened the siege against our homeland” referring to the intensification of the financial, economic and commercial blockade against his country.

“They intended to tie our hands and feet financially,” the Bolivarian president said and thanked the Venezuelan people for their resistance amid the economic crisis induced by the President Donald Trump administration.

“Their calculations did not consider one factor, the people factor, which has 20 years of revolution and feels itself heir to the legacy of Hugo Chavez.”

The Venezuelan president recalled that the transportation of alleged “humanitarian aid” from Colombia was the disguise used by the far-right opposition to try to attack the Bolivarian government.

Despite the economic war to which the Venezuelan people are being subjected, the Bolivarian Government continues to work and strengthen Venezuelan Culture and traditions through the Diplomacy of the peoples @IVCC_SVG @MFAVenezuela @FPerezSantana @telesurenglish @CancilleriaVE pic.twitter.com/tl76pvV5jl

On Feb. 23, 2019, “the aggression came disguised as humanitarian aid trucks,” Maduro said and added that a “millionaire concert endorsing the aggression” was performed shortly before the failed attempt.

“Pence, Duke, and Piñera were accompanying him in the farce they made,” Maduro commented.

A month earlier, this U.S.-backed lawmaker had proclaimed himself as “President in Charge” of the South American country during a rally held El Cachao, an upper class municipality located in Caracas.

RELATED CONTENT: During 2019 There Was a Decrease in Shortage Rates

The cost of U.S. aggression was over US $40 billion
During his Address to the Nation, Maduro revealed that the Trump-fostered economic blockade was equivalent to the theft of Venezuelan assets for US $40 billion.

This arbitrary action has hindered the recovery of the Venezuelan economy in circumstances in which the local private sector has contributed to creating a parallel currency market that fostered informal dollarization.

To prevent these actions from affecting the majority of the population much more, the Bolivarian government has designed a strategy in which the Venezuelan cryptocurrency, the Petro, plays a fundamental role.

This virtual currency expanded its circulation notoriously in Dec. 2019 when it was handed over as a bonus to favor workers who are still at the mercy of the private “criminal speculation.”

Solidarity is the greatest moral force
In 2019, despite the difficulties stemming from the U.S. economic bullying, the Venezuelan government and people generated the conditions for peace to prevail in their territory and gave a lesson to the world.

“We have achieved political and social peace. Now we are going to relaunch the economy to give prosperity to all Venezuelans, who deserve it after the imperialist war.”

The president pointed out that the Venezuelan people strengthened their commitment to solidarity while deploying their ingenuity to overcome the daily challenges induced by the U.S. blockade.

“The lesson is solidarity. It is not only a survival response,” Maduro said and stressed that solidarity is “the greatest moral force to which we can aspire to face life as a nation and as a people.”

“Mission accomplished. Independent and socialist homeland,” the Bolivarian president said at the end of his annual Address to the Nation.