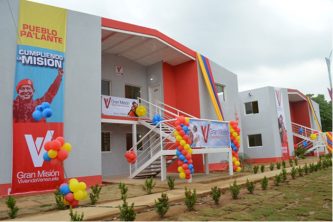 Last Tuesday, a delegation from Honduras visited Venezuela, to establish an agreement with the Bolivarian Republic of Venezuela, with the purpose of promoting whit the sister nation, a plan of decent and accessible housing for the Honduran people, similar to the Great Housing Mission Venezuela. In this sense, the head of the Housing Ministry of our country, Ildemaro Villarroel, informed through his account on the social network Twitter @IMVillarroel, that in the meeting was signed a Letter of Intent on housing between Venezuela and Honduras.

“We are signing a letter of intent for cooperation between the Ministry of People’s Power for Habitat and Housing and two mayors of our sister nation of Honduras, in order to ensure better quality of life for its inhabitants,” said the Minister.

Regarding Housing, the Bolivarian Government has always expressed its interest and support to establish agreements with countries that wish to develop social plans and missions on their lands, always pursuing the greatest amount of happiness for the people of Venezuela and the world.