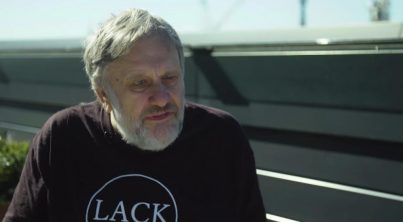 Instead of focusing on President Donald Trump, the Slovenian philosopher says liberals should incrementally challenge the fundamentals of the economic system.

Slavoj Žižek and British political writer Owen Jones recently spoke about American politics, the left and global capitalism.
Žižek sees the success of President Donald Trump as proof that the left needs a major overhaul.
Žižek said one positive aspect of Trump’s presidency could be the rise of a new movement on the left.
The crucial battle in American politics today is what’s happening within the Democratic Party, not what’s happening against President Donald Trump, according to the philosopher and cultural critic Slavoj Žižek.

Žižek recently sat down with political commentator Owen Jones for an interview that covered the changing nature of global capitalism, the successes and failures of modern leftist movements, and the best ways to change existing political structures.

Žižek, a frequent critic of both capitalism and the shortcomings of the modern left, said liberals focus too much on social issues, such as LGBT rights and racism, and on new right-leaning factions. The cost? The majority of working-class voters may not hear what’s in it for them.

“The crucial event today is not the rise of the New Right,” he said. “The crucial thing is the disintegration of the central-left welfare consensus. This is why the crucial battle in the U.S. today, it’s not against Trump, it’s what happens within the Democratic Party.”

Donald Trump is “not the real problem”

Hillary Clinton and what she stands for—the status quo, the preservation of global capitalism and even the Republican tradition—is the primary problem for the left, which Žižek said has ceased to question the fundamentals of the system.

“Capitalism is changing, but we simply don’t notice this in front of our eyes,” Žižek said. “It’s crucial to bear in mind that Trump is, to use your terms, a reaction–a consequence–of the new processes in global capitalism, which brought about the disintegration of this welfare state, liberal capitalist consensus.”

Žižek said people are dismissed as radicals if they identify as Social Democrats today, even though policy proposals from figures such as Sen. Bernie Sanders (I-VT) are relatively modest compared to mainstream European democracy in the mid-20th century.

“But I claim, maybe this is also our hope,” he said. “Maybe we will not succeed but we will trigger a process. Officially, Occupy Wall Stress was a failure. But they laid the foundation, they fertilized the ground.”

Žižek said a similar new movement could arise as a result of Trump’s presidency.

“I see a possible positive function of Trump,” he said. “He from, the wrong side, nonetheless unsettled this liberal consensus and opened up a space also in this sense, for a more radical left. My idea is that, in some deeper sense, [there’s] no Bernie Sanders without Trump.”