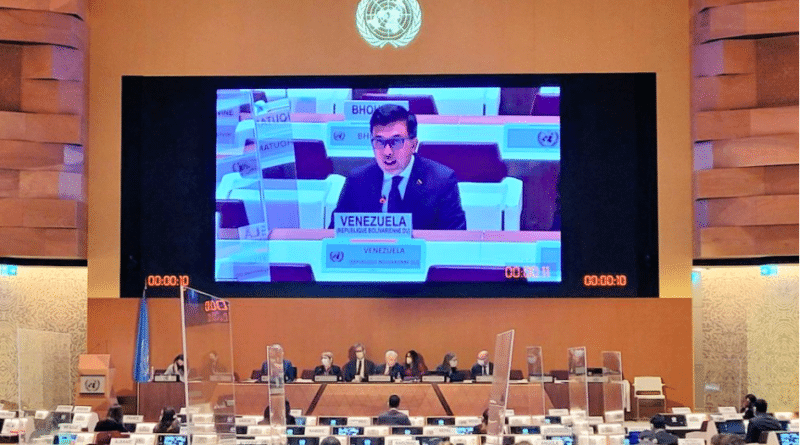 The Venezuelan government has thanked the United Nations’ (UN) recognition for Venezuela’s progress in the implementation of human rights, but has denounced the disqualifications—without evidence—that persist and smear the government’s respect for and cooperation with international human rights mechanisms.

Héctor Constant Rosales, ambassador and permanent representative of Venezuela to the UN and other international organizations in Geneva, took part in the presentation of a report by the UN High Commissioner for Human Rights, Michelle Bachelet. In said presentation, Constant declared that the Venezuelan government “is concerned about the instrumentalization of human rights for a political agenda. This is a deviation from the sacred objective of such mechanisms.”

The Venezuelan diplomat made it clear that, although Venezuela is satisfied with the work that it has implemented together with the Office of the High Commissioner, the Venezuelan government nonetheless feels concern over the politicization of human rights.

Respect at the UN
Constant also stated that Venezuela has contributed to the broadening of the scope of the UN High Commissioner’s Office in Venezuela, which have deepened existing agreements.

“The officials of the High Commissioner’s Office carry out their mandate [in Venezuela] with total freedom and support from the competent state bodies,” expressed Constant. He also ratified the Venezuelan government’s disposition to adhere to the mandates of the UN representatives.

During the presentation of the report, High Commissioner Bachelet advocated for the renewal of the negotiations, that began in Mexico last year, between the government of President Nicolás Maduro and the Venezuelan extreme right.