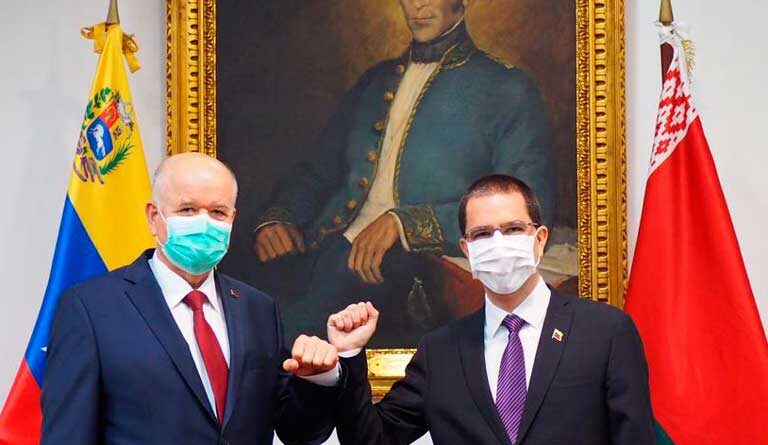 On Wednesday, the Venezuelan government delivered the Francisco de Miranda Order, in its “Generalissimo” First Class, to Oleg Paferov, ambassador of the Republic of Belarus.

The Foreign Minister of Venezuela, Jorge Arreaza, led the event and said, “It has been a privilege to have his presence, and with it the love of all the people of Belarus and its president Aleksander Lukashenko, in this higher stage of our relations.”

“He has lived eight intense years of the contemporary history of Venezuela, since 2012 with the electoral victory of the Commander Hugo Chávez, his illness, his departure and then he witnessed the struggle of a people to defend their right to be in political control of the country,” he said.

In solidarity with Belarus in the middle of a Western-backed neoliberal coup attempt – and as an act of protest against the same imperialist countries that are trying to overthrow Venezuela's govt – Venezuela just honored Belarus' ambassador with the Order of Francisco de Miranda https://t.co/lWkNSaV9Li

Foreign Minister Arreaza expressed his solidarity with Belarus, a country that in his opinion today, like Venezuela, also faces attacks by imperial powers. “The script is repeated, arrogant powers of Europe have declared that they do not know the electoral results, as if they had some supra-constitutional power to do so,” he said.

For his part, Oleg Paferov said, “I thank President Nicolás Maduro for this decoration, it is not only recognition of my work as Head of Diplomatic Mission, but also of the entire work team that accompanies me,” he said.

He said that during eight years of work in Venezuela, fruitful work has been done. “I have always worked so that geographical distance is not an obstacle to the development of bilateral relations between our peoples,” he said.

He added that the people of Belarus will always be grateful to Venezuela for the invaluable support provided during difficult times.