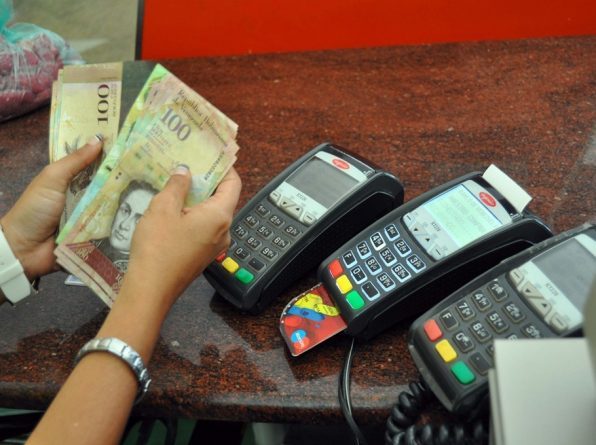 15/Mar/2019.- The US government has increased pressure against Caracas mainly by targeting the oil industry.
The US is considering new sanctions that would stop Visa, Mastercard, and other financial service companies from processing payments in Venezuela, according to a White House official quoted by Reuters.

“The purpose of these sanctions is to continue to deprive the illegitimate Maduro regime of access to funds,” the official said.

According to the Reuters report, the measures would aim to “block state-owned financial institutions’ access to the international financial system” while exempting “everyday Venezuelans,” but no details were offered. It is also unclear at the time of writing whether the measure would affect debit cards as well as credit cards, with the former being the most common form of payment in Venezuela given the cash shortages caused by hyperinflation.

US sanctions have also seen two shipping companies sever ties with Venezuelan state oil company PDVSA. US-based McQuilling Partners and German Bernhard Schulte Shipmanagement (BSM), which managed 4 and 15 tankers for PDVSA, respectively, have recently announced they are no longer providing oil-shipping services to the Venezuelan firm, making it harder for Caracas to place its crude in global markets.

The US Treasury Department imposed a de facto oil embargo against Venezuela in late January, forbidding US companies from dealing with PDVSA and freezing Venezuelan assets in the US, chief among them US-based PDVSA subsidiary CITGO. On Thursday, the Treasury’s Office of Foreign Assets Control (OFAC), extended a license for CITGO to maintain its operations for a further 18 months, although the company is barred from sending any profits back to Venezuela.

Self-proclaimed “Interim President” Juan Guaido has attempted to nominate new executive boards for CITGO and PDVSA, with legal battles expected in US and international courts after the Venezuelan government vowed to protect its assets.

Venezuelan oil production has fallen steeply over the past couple years as a result of underinvestment, lack of maintenance, and US-led financial sanctions. OPEC sources put the February output at 1 million barrels per day (bpd), down from 1.67 million bpd in February 2018.

US officials have explicitly targeted the oil industry, responsible for over 90 percent of the country’s foreign currency income. Secondary sanctions against non-US companies dealing with Venezuelan oil have also been floated, and Secretary of State Mike Pompeo disclosed on Monday that he had talks with India’s Foreign Minister,Vijay Gokhale, to get Indian companies to stop buying Venezuelan oil. Caracas has scrambled to find new oil buyers following the US embargo, with India the main cash buyer.

The threat of further sanctions comes as the Venezuelan economy shows tentative signs of escaping the hyperinflationary spiral that has gripped the Caribbean country since early last year. According to the opposition-controlled National Assembly’s financial commission, inflation was 53.7 percent in February, down from 191,6 percent to in January. Hyperinflation is defined as; a monthly inflation above 50 percent and Venezuela has been mired in hyperinflation since November 2017.

The Venezuelan Central Bank changed course in December, aggressively devaluing the Sovereign Bolivar (BsS) with respect to the dollar in the official DICOM foreign currency auctions until it overtook the black market exchange rate in late January, at around 3,300 BsS per dollar. The black market rate has hovered around this value ever since.

Economists have credited this policy, along with measures meant to restrict the amount of Bolivars in circulation, for the stabilization or even decrease in some prices, but have warned that this comes at the expense of a contracted demand.