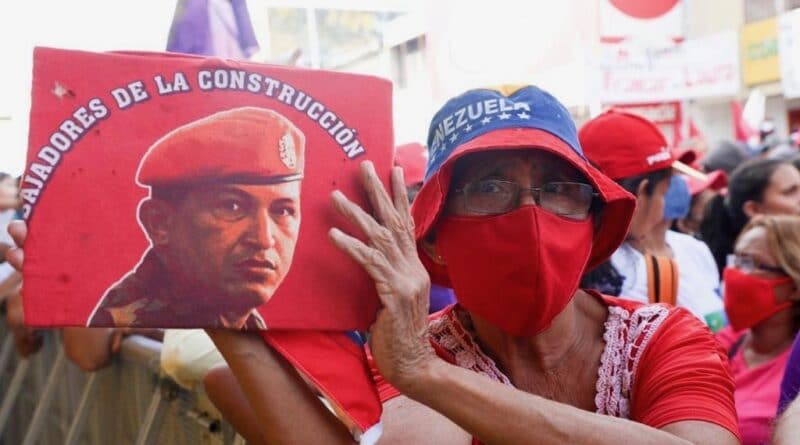 On December 6, the Venezuelan people will vote for a new National Assembly. Ordinarily, there is nothing unusual about this, nor would this be newsworthy outside Venezuela. Ever since the election of Hugo Chávez to the presidency in 1998, the Venezuelan people have been used to more than one national election each year (this legislative election is the 25th in 21 years); these have been the presidential elections, the legislative elections, and the referendums to strengthen the 1999 Constitution. On the surface, this is just another one of these elections that has served to deepen the meaning of democracy in Venezuela.

But, these days, even the holding of an election is a contest between the Venezuelan people and the United States government. Since Chávez became the president, the United States government and its allies have tried to destabilize Venezuela’s government, including by direct efforts at regime change. When it became clear that Chávez and the Bolivarian Revolution, which he led, had strong popular support and could not be defeated at the ballot box, the US government and its allies pushed to delegitimize Venezuela’s political sovereignty.

Strong disagreements mark the Venezuelan political arena, where the oligarchy maintains its own political platforms and continues to attempt to undermine and defeat the Bolivarian Revolution. These forces—now called the opposition—have contested elections since 1998, with some gains no doubt, but without being able to prevail. In 2015, for instance, the opposition was able to win a majority in the National Assembly elections and has controlled the Assembly over these past five years. The very fact that the opposition won in 2015 shows that there is a robust electoral system in the country. At that time, there was no complaint about fraud.

An Opposition Made in Washington

Rather than undertake their constitutional duty to govern alongside President Nicolás Maduro, sections of the opposition decided to operate as a wing of the US Embassy in Caracas. One of the legislators, Juan Guaidó (who had won his seat from the state of Vargas), allowed himself to be made the instrument of a US-attempted political coup after the presidential election of 2018. The opposition to the Bolivarian Revolution has always been divided and has not been able to find a unity of purpose. One of the most important divides is along the axis of whether or not to subordinate itself to the United States government. People like Guaidó were quite happy to be an instrument of Donald Trump and Mike Pompeo, while others made it clear that this was an unpatriotic, even treasonous, approach. Since 2015, the opposition has faced an existential crisis around this question of the level of US support for its political process; Guaidó’s entire influence relied on his support from Washington, rather than from his own constituents or from the opposition.

The Venezuelan Constitution requires an election to the National Assembly before January 5, 2021, when a new group of legislators have to be sworn in. That is why the election is being held on December 6. Some sections of the opposition that derive their power from Washington—such as Guaidó’s camp—had decided early on to boycott the election by alleging that it would be fraudulent. They have not provided evidence for these claims; the North Atlantic media required no evidence to repeat them, nor did this media address the simple matter of the National Assembly elections in 2015 having favored the opposition. Rather than contesting power through democratic means of elections or proposed legislation, the Guaidó opposition seeks to seize power by undemocratic means. Winning the election seems less important than delegitimizing the electoral and democratic process.

US Interference in the Elections

The United States government—with bipartisan support from both Republicans and Democrats—has actively intervened in Venezuela’s 2020 National Assembly election. In September, the US Treasury Department sanctioned four officials of the Venezuelan government: Reinaldo Enrique Muñoz Pedroza (the attorney general), David Eugenio De Lima Salas (a former governor), and two officials of the National Electoral Council (Consejo Nacional Electoral)—Indira Maira Alfonzo Izaguirre and José Luis Gutiérrez Parra. Indira Alfonzo is the president of the National Electoral Council and a well-respected former judge with long-standing ties to the opposition. The US government claimed—without providing evidence—that these officials were part of an “election interference scheme to prevent free and fair parliamentary elections from taking place in December 2020.” The US government’s interference continued later that month with its subsequent sanctioning of five opposition leaders who decided to participate in the elections; the US State Department sanctioned them for their “complicity” in the elections.

Opposition politicians who face this pressure from Washington also face a disgruntled base in Venezuela that has been fighting against this policy of abstention and boycotting. Many of the party members from these opposition groups have sued their leaders, demanding that they participate in the election. They are fed up with the strategy of attrition by Guaidó and by Guaidó’s subservience to the US State Department.

For that reason, there are more than 14,000 candidates from 107 political organizations, with 98 of them identified as opposition parties. They will contest the 277 seats (increased from 165 to better reflect population growth and more ability for democratic input).

Venezuela’s National Assembly has been stalled ever since it was made an instrument for regime change by Washington. Now, with this election, it is hoped that the legislative process can resume. A new National Assembly would be able to appoint key officials and would be able to discuss legislation to address the pandemic; it should become a place for healthy dialogue between the government and the opposition, which has been hijacked by Washington and by Guaidó. More than anything else, this National Assembly would provide a legal challenge to governments and banks in Europe and the United States that have frozen at least $6 billion of Venezuelan funds and confiscated assets such as Citgo; they will no longer have Guaidó’s alleged interim government to use as an excuse for their actions.

Carlos Ron is Venezuela’s vice minister of foreign affairs for North America and president of the Simón Bolívar Institute for Peace and Solidarity Among Peoples.