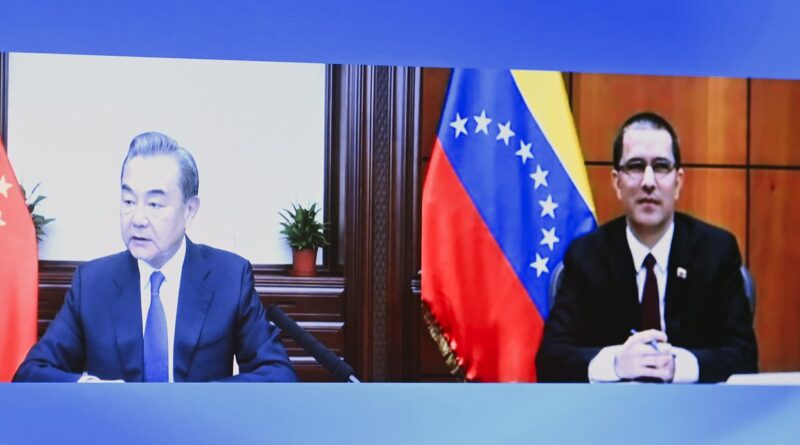 On Thursday, September 4, Minister of People’s Power for Foreign Affairs Jorge Arreaza and his counterpart from the People’s Republic of China Wang Yi held a virtual meeting to keep up working together to fight COVID-19, strengthen the comprehensive strategic alliance between their countries and reiterate their governments’ confidence in multilateralism.

The Chinese foreign minister expressed the solidarity of his people and government, and informed China is assessing the use of funds for the fight against COVID-19 to donate medical supplies to the Bolivarian Republic of Venezuela and meet its most urgent demands, based on the agreements reached by Presidents Nicolás Maduro and Xi Jinping in a telephone conversation months ago, when they set out guidelines on the path bilateral relations should follow.

“Venezuela is one of the countries that first receive high-quality technical assistance from China in the Caribbean region (…) We share the same stance towards multilateralism and global governance,” said the Chinese foreign minister.

Foreign Minister Wang Yi also highlighted that the development of vaccines is a focus of international interest, and, when available, they will be a global public product that will favor access for developing countries.

“Venezuela is our good friend, and of course, it is one of the priority recipients of the vaccines,” said Wang Yi.

The Venezuelan and Chinese foreign ministers agreed on moving forward with food security as the current economic blockade hinders the system of exports, agro-industrial production and food distribution.

Likewise, they informed about the reformulation of economic, financial and energy cooperation mechanisms.

Regarding the China-Venezuela High Level Joint Commission, they reported the next one will be held in the Latin American country.

“We need the people’s wellbeing, services, food security. These are urgent demands, and it is necessary to allocate more resources to foster cooperation in these areas,” explained Wang Yi.

The Chinese foreign minister asserted that the Venezuelan people will be able to defend their sovereignty and independence, and overcome difficulties under the leadership of President Nicolás Maduro.

In a different vein, the Chinese diplomat was certain that China is willing to cooperate with the Bolivarian Republic of Venezuela, defend its legitimate interests, and promote dialogue and reconciliation.

“In this process, China will keep exchanges and contacts with Venezuela. We want to play a constructive role in this process,” he stressed.

On the other hand, the Venezuelan foreign minister went deeper into the progress of political dialogue in Venezuela.

“Recently, we managed to take an important step with the opposition. We have broadened the guarantees of our electoral system. We invited the United Nations and the European Union. Whoever wishes to observe our parliamentary elections can do it. We have achieved it thanks to the will of all Venezuelans, those who support and those who do not support the Revolution,” explained Arreaza.

Finally, the Venezuelan foreign minister thanked China’s fraternal relation and support for this process. “We have achieved it thanks to our friends, who have always been willing to build bridges, supported all forms of dialogue in Venezuela, and neutralized attempted aggressions and forced regime changes in Venezuela at international forums.”

Featured image: Photo courtesy of the Government of China.