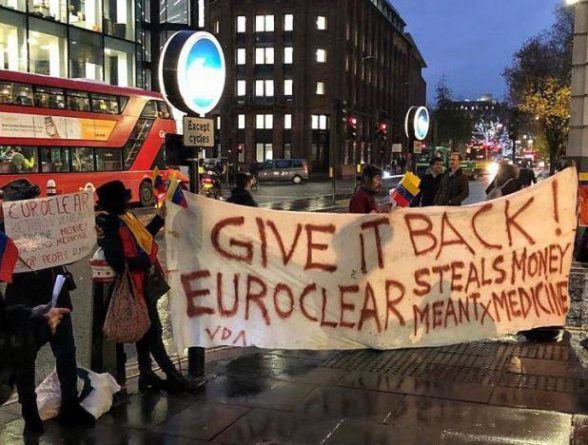 With banners in hand and messages like “We do not want charity. Raise the sanctions on Venezuela “or” Give it back! Euroclear steals money for medicines “, a group of Venezuelans living in the city of London, England, took to the streets in rejection of the service provider Euroclear, pointed more than a year ago by the president of the Bolivarian Republic of Venezuela, Nicolás Maduro, to participate in the financial blockade against Venezuela.

“We have 450 million dollars in cash, for purchases of medicines, construction materials, food and have been frozen by Euroclear, only to punish Venezuela, to make us give up. Stop the kidnapping of Venezuelan money abroad ” , indicated the Venezuelan Head of State months ago.

In addition to the retention of 450 million dollars, another 1200 million in bonuses are added, already accepted by financial brokers.

This is the result of the sanctions requested by spokesmen of the Venezuelan right and imposed by the Western elites.

According to the Venezuelan research portal, Misión Verdad, Euroclear together with Clearstream control almost 100% of the global financial system of clearing or “international compensation”.

It is a fully computerized payment and delivery system that allows exchanging titles, bonds and money from one place to another on the planet and in real time. In this way, it guarantees the financial operators that whoever pays sends the money, and whoever has to collect actually receives it.

The clearing companies publish the list of their operations in full, they are considered “perfectly transparent” as a result of an agreement between banks that are in accordance with national banking legislation. This compensation system plays an important role in international finance and is an unavoidable step in raising money to offset payments and large transactions.