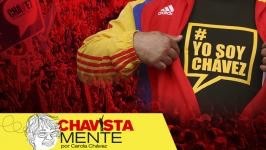 We were in the last corner of the Perfect Campaign [Chavez’s last presidential race in 2012], I had only been running four weeks of the months that my colleagues and Chávez were campaigning. One evening in each place, two or three acts in a single day. It would have been exhausting, but I saw Chavez, tireless, and I knew that you could not get tired. “You are also Chávez, Venezuelan woman …” [this is a Chavez slogan].

One afternoon, after two hours of caravan in full sun, in that truck that moved little by little, waving, “be careful not to step on them”, when we finally reached the platform, I saw Chavez get off the truck and climb the stairs. They took him to the platform, slowly, almost stooped, and then I knew he was in pain. “A pain that can be unbearable,” he told us later.

He finished climbing the stairs while we all sang “live your life, give him joy …” [the very popular campaign jingle] and as soon as he set foot on the platform, he straightened up and with his long steps he approached the musicians, grabbed an electric guitar and started dancing. He danced, sang and gave us a beautiful speech of two more hours: “You are also Chávez …” Then I knew that in this fight there was no fatigue, pain, sadness, or anything that would excuse us from continuing to fight.

Days before, in that slider, we had been in Apure, where Chávez met with his longings, “If it will touch me or rather, I know it does not touch me, if it had touched me, the luck of Lorenzo Barquero, who the savannah swallowed, I would have agreed. If someone had asked me: Do you want the fate of Lorenzo Barquero? To stay far away, in the Cajón de Arauca Apureño, until your time dries up and you become lumpy and turn into dirt and turn into water from this savanna? I would say, yes, yes and a thousand times yes. Because I love this land “… [this is a passage of one the most powerful farewell speeches of Chavez]. His other destiny, if he had not chosen the heroic destiny that he assumed with courage, with a conviction without fissures, without self-indulgent excuses that would allow him to get off the bus if things got difficult or ugly, like so many times it got, as so many many times it would. A destiny that he assumed with joy.

I remember the day he announced that he was returning to Havana because his cancer had reappeared. There was no more painful news! Having said that, I remember that he dedicated himself to mitigate the pain, his and ours throwing jokes-stories of the entanglements of February 4, 2002. I remember that we went from crying with sadness to crying with laughter and then dismissing him with joy and hope. I remember the entire highway to La Guaira full of people throwing blessings and flowers. I remember his loving face and his smile.

Another night, the saddest of all, came to give us the worst news: “Good evening to all, good night to all. Well I am forced by the circumstances, you know my dear friends, my dear Venezuelans, friends all, that is not my style on a Saturday night and less at this time, nine and a half of the night … Do you remember That movie Diosdado? … – Although his eyes said goodbye, he fought his sadness and ours to the rhythm of lambada- … Saturday night fever, John Travolta, I danced La Lambada, compadre. Yadira also danced it. We danced La Lambada, I remember that movie, it had a lot of impact … do you remember? Oh! It was the impact of those years, what? the 80s, the 70s, the 80s, Teresa Maniglia danced La Lambada but divine, I saw her once “. Laughter and a tight heart … “Chavez is no longer me, because Chávez is a people.”

Chavez never embraced pity, never tried to capitalize on it. Chavez never saw us as “poor little town” and was never a “poor me”. Chávez never gave up. That campaign afternoon, I knew that we could not give up and less justifying ourselves with the slobber that we do it in the name of Chavez, the man who never gave up. The man who, in order not to stop fighting, remains victorious beyond life.

“I am Chávez” -we said. And as he taught us, we have to grit our teeth and smile harder when the tears burn in our eyes and the more anguish tightens your heart. I am Chavez.