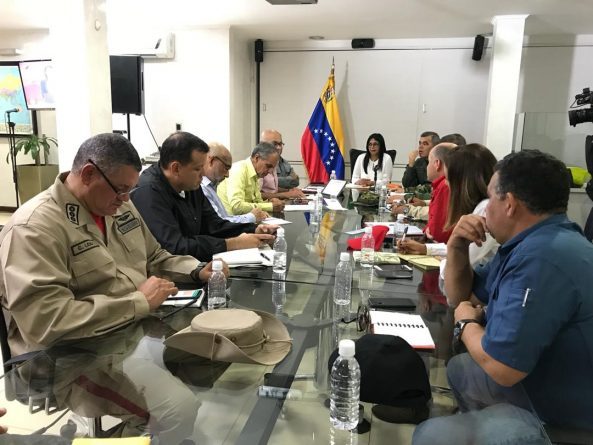 The Venezuelan Vice President, Delcy Rodríguez, informed on Wednesday about the intervention, restructuring and modernization of the Corporación Eléctrica Nacional (Corpoelec), which will go “hand in hand with its workers”, to whom she praised for their committed work and without rest to solve the crisis caused by the attacks on the facilities of the Hydroelectric Power Plant of Guri on March 7 and 25.

At a press conference held by the Electric General Staff from the Teófilo Méndez air base in Puerto Rodaz, Bolívar state, she reported that “we have installed the Electric Power General Staff and we have defined two lines of work: The attention of the electrical emergency and the construction of a new system, through the modernization of Corpoelec “.

She indicated that the Electric General Staff has decided to create six work commissions to protect the national electrical system.

The vice president said that Jorge Rodriguez, sector vice president of communication, will show in the coming days new evidence provided by the meticulous investigation carried out. “There is no doubt about the acts of cyber sabotage, physical attacks, alteration of transmission mechanisms, which seeks to directly attack the source of electricity generation.”

She reiterated the allegations that the US government is primarily responsible for these attacks, which also leave the population without water, food and medicine. “It is an unprecedented situation,” she explained.

Delcy Rodríguez highlighted the “highly civic” behavior of the people of Venezuela, due to the impact of the different public services.