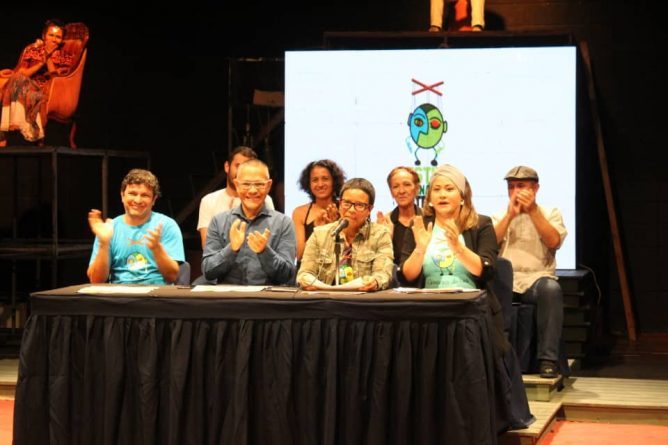 The mayor of Caracas, Erika Farías, announced the production of the Eighth International Theater Festival, with more than 400 activities on five axes, most of them taking place between April 12 and 21 at different venues in Caracas, including 14 theaters, two parks and 110 sites in communities of the city. 49 theatrical groups will be present. In addition, there will be activities in 4 cities. The maestro José León, precursor of the puppet theater and founder of the children’s group Los Monigotes, will be honored.

In the press conference, the Minister for Culture, Ernesto Villegas, was also present.

It will work in five axes:

The pre-sale begins on April 4 at the ticket offices of the National, Municipal and Teresa Carreño Theater. The tickets will have a price of Bs. 2,000.

Farías said that this year will be held not only in Caracas but in several points of the country: in Maracaibo (Zulia), La Guaira (Vargas), Chichiriviche (Falcon) and San Carlos (Cojedes). 14 new national productions will be released.

“We do not believe in terrorism and violence, but in dialogue, debate and understanding, for which we have decided very responsibly and despite all the obstacles, to carry out this eighth edition to honor the work. Because we want peace to work, to share, to produce. ”

José León, the honored artist, “is an extraordinary man who dedicated his life from adolescence, from 14 and 15 years old, to tenderness, to love, to theater for boys and girls,” said the mayor. “He has gathered great experience and trajectory in his life, for which we have decided to pay homage to him in life”.

Villegas: Let Filven bring theater to all states
The Minister of Popular Power for Culture, Ernesto Villegas, called for applause for Caracas for the organization of the Theater Festival and called on the rest of the country “to see this example of how steadfastness and courage, dedication and commitment to art and culture make what seems impossible happen. ”

He was happy that the Festival has left Caracas and reached 4 points of the country, and invited (the public) to take advantage of the regional route of the International Book Fair of Venezuela (Filven), which reaches all the states of the country, so that it “incorporates a theatrical component and that the book goes hand in hand with the theater “.

He congratulated artists, artisans and creators “for coming here and for getting to where we will have to arrive, victorious.”

“Culture cannot be put out and a proof is this festival that is illuminating the Venezuelan people and the world. They have tried to plunge us into darkness, and from the depth of our history and from deep within the commitment of our men and women the light of the International Festival of Theater of Venezuela springs forth “.