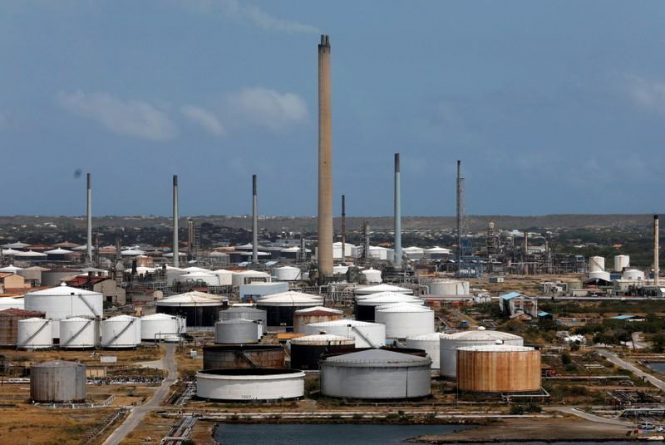 The British news agency Reuters said Tuesday that the Venezuelan state oil company Pdvsa “kept its oil exports at around 1 million barrels per day in March, despite sanctions imposed by the United States and power cuts that paralyzed its main export terminal, according to company documents and data from Refinitiv Eikon “.

Reuters explained that Venezuela “stabilized exports in March after shipments fell more than 40 percent in February compared to the average of the previous three months, immediately after Washington announced sanctions on oil sales by the state oil company.”

The agency said March exports of 980,355 barrels per day (bpd) of crude oil and fuels were slightly lower than February shipments of 990,215 bpd, according to data from PDVSA and Refinitiv Eikon.

RELATED CONTENT: US Pressures Spain to Stop Repsol From Doing Business with Maduro

“Given the new set of measures that fell on PDVSA, we were surprised to see an uptick in exports amid the blackouts across the country,” said Samir Madani, co-founder of TankerTrackers.com, a service that tracks oil shipments and storage.

Reuters warned that the Donald Trump government’s restrictions on Venezuelan exports “will become stricter in May, when the grace period expires to close purchases made in dollars or by importers with subsidiaries based in the United States.”

The government in Washington would be considering imposing secondary sanctions on the purchase of Venezuelan oil that could affect companies from other countries that do business with PDVSA, White House National Security Advisor John Bolton told Reuters TV last week.

Most shipments of Venezuelan oil in February and March were shipped to Asia, says the agency. Until the imposition of sanctions, the United States was Venezuela’s largest buyer of crude oil.

RELATED CONTENT: What a US Military Intervention Against Venezuela Would Look Like (According to Foreign Affairs Magazine)

PDVSA’s exports fell below 650,000 bpd during power problems, according to TankerTrackers estimates. According to Eikon data, two major power cuts in March caused Jose’s terminal, the largest for the country’s oil export, to interrupt shipments for a total of six days. However, PDVSA was able to offset its sales after the power outages by loading larger vessels to Asia. The shipping data shows that the company plans to do the same in April.

Shipments sent to India, China and Singapore, a storage and re-export center, accounted for 74 percent of total exports in March, compared with almost 70 percent in February.

Exports to Europe accounted for 17 percent of the total, compared to 22 percent in the previous month.

PDVSA also continued to export oil to Cuba, an ally of Maduro. According to the data, at least seven small shipments were sent from their ports in March for a total of 65,520 bpd of crude oil and fuels.