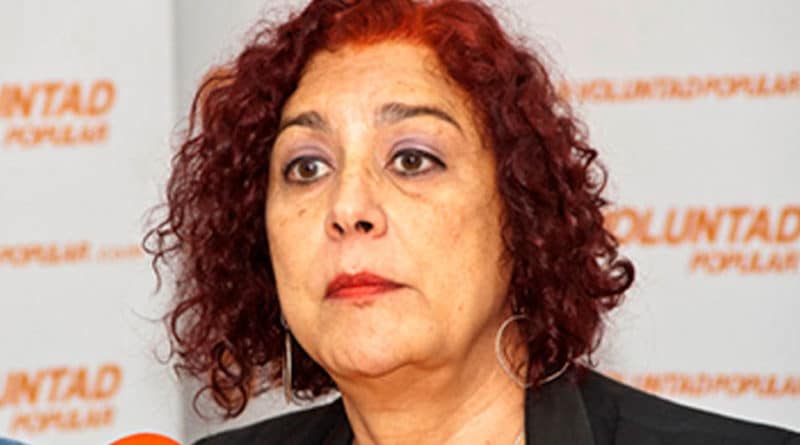 According to an investigation published by the Miami based newspaper El Nuevo Herald, the deputy of the right wing party Voluntad Popular (led for several months by Juan Guaido), Tamara Adrián, is linked to a case of corruption within the state-owned company Petroleos de Venezuela (PDVSA), today under harsh US sanctions affecting its operation.

The alleged corruption scheme is linked to the tenure of the now fugitive from Venezuelan Law, Rafael Ramirez in 2012 when Venezuela was in the middle of the most complex exchange rate system in history, called CADIVI.

An article published today on the website of this outlet entitled “Venezuelan Opposition Linked to the Largest Case of Chavista Corruption Registered so far” explains that the name of the parliamentarian appeared in an investigation filed in the United States against Luis and Ignacio Oberto.

“Attorney Tamara Adrián, before winning a seat in the National Assembly (2015) as an anti-Chavista deputy, certified the legality of a series of loans to the state-owned Petróleos de Venezuela, a scheme that American. authorities say today was used to embezzle 4.5 billion dollars, in what is considered as the greatest case of Chavista corruption seen so far,” said the aforementioned piece.

According to the newspaper, “these operations allegedly allowed Venezuelan bankers Luis Oberto and Ignacio Oberto to become immensely wealthy, with the assistance of Swiss banker Charles Henry Beaumont, according to research conducted by the United States Department of Justice.”

The aforementioned investigation indicates that Adrián issued a legal opinion in early 2012 stating that said operation was completely legal.

“We are of the opinion that PDVSA should be able to pay debts originally created in bolivars with foreign currencies,” was what was written by the (now) parliamentarian at the time. During those days Venezuela was in the middle of a complex exchange rate control system that for several years allowed several exchange rates running in parallel.

When asked by El Nuevo Herald about this investigation, Adrián affirmed that “the operations analyzed by the firm were totally legitimate . ”

The parliamentarian responded to the accusation on her Twitter account, arguing that in 2012 a client asked for her opinion about the legality of a contract it would sign with PDVSA, specifically, in relation to the legal system related to Foreign exchange operations.

“We were asked if the payment in foreign currency of obligations assumed by PDVSA in bolivars would be in contravention of the exchange and legal system at the time, provided that such payment generated clear profits for PDVSA. Taking into account the legislation in force at that time, I expressed that, subject to compliance with the conditions and requirements explained therein, the payment thus made was not in contravention of the legal and exchange law of that time,” Adrian wrote, at the time which clarified that her opinion was restricted to the limits of the contract that was submitted for consideration.

In addition, the deputy denied her responsibility in the case, since she said she had not been involved “neither in the direct negotiation of the contract nor in its practical execution”. She also added that “other lawyers, including the PDVSA Legal Consultancy and private firms, confirmed this legal opinion and the legality of the operation in which I consulted.”

Adrián added that, in her opinion, having demonstrated the legality of these operations, “opened the improper appetites of the “Bolichicos” and the door to the creation of a Frankenstein monster”, in whose creation she did not have any connection with.

Instead, the lawyer blamed the stepsons of President Nicolás Maduro, Raúl Gorrín – owner of the Globovisión channel – and the “Bolichicos” for having discovered, in her opinion, “the germ of a means to drain PDVSA resources to get rich” and that such operations would have been maintained for several years.

The political leader finalized her clarification, deploring the way they had intended to involve her in events in which she had no participation, “beyond reviewing, as a lawyer, the legal documentation and the proposed contracts, which is a normal activity for a lawyer” and criticized the way in which the American newspaper disseminated the information, which, according to her, would be “an attack aimed at contributing to the matrix that wants to impose the ‘regime’, which aims to show that everyone is corrupt.”