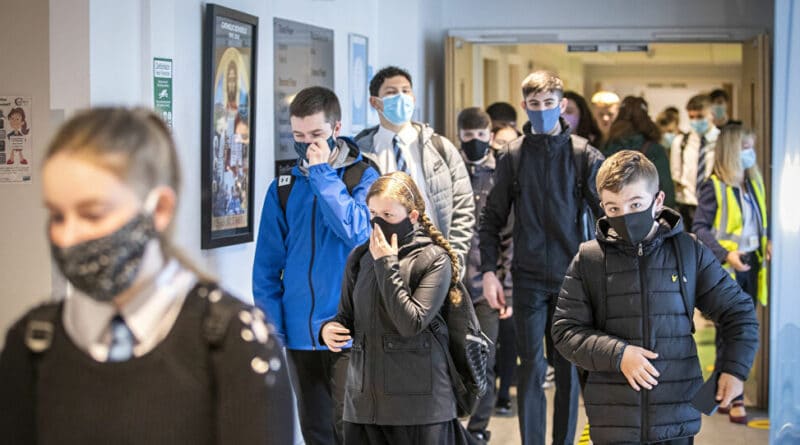 As the first vaccinations in the US begin for SARS-CoV-2, the virus that causes COVID-19, amid hundreds of thousands of deaths from the disease new documents from the outgoing Trump administration reveal that the catastrophic rise in cases in recent months could have been part of a deliberate policy decision.

December 17, 2020— Internal Trump administration emails obtained by Politico have revealed that a top health adviser repeatedly urged the purposeful spread of COVID-19 among millions of people. The same adviser was revealed months ago to have pressured the US Centers for Disease Control and Prevention (CDC) to change its long-standing position on the safety of reopening schools during the same time period.

‘Let the Kids and Young Folk Get Infected’

This past July, then-science adviser Paul Alexander spared no effort badgering the Trump administration about the need to relax social distancing restrictions and allow COVID-19 to spread, saying it would create a “herd immunity” to the virus.

“There is no other way, we need to establish herd, and it only comes about allowing the non-high risk groups expose themselves to the virus. PERIOD,” Alexander wrote in a July 4 email to his boss, the Department of Health and Human Services’ (HHS) assistant secretary for public affairs, Michael Caputo, and six other senior officials. The email was one of several obtained by Politico and printed in a Wednesday story.

“Infants, kids, teens, young people, young adults, middle aged with no conditions etc. have zero to little risk… so we use them to develop herd… we want them infected,” Alexander urged, adopting a talking point pushed by Trump since at least May, but not supported by data, as the Associated Press demonstrated.

In another email sent to the Food and Drug Administration commissioner, Stephen Hahn, Caputo and eight other senior officials, Alexander urged that “[I]t may be that it will be best if we open up and flood the zone and let the kids and young folk get infected” in order to get ‘natural immunity… natural exposure.’” According to Politico, which cited emails obtained by the House Oversight Committee’s select subcommittee on coronavirus, Caputo asked Alexander to research the idea.

Families are demanding that their kids continue to learn this fall. Schools need to reopen and get creative about how to deliver a full school year of learning. Where there’s a will, there’s a way. Thanks, @TuckerCarlson, for giving a voice to parents who are demanding better. pic.twitter.com/tOEYMdDzoF

​That same day, Alexander complained to CDC Director Robert Redfield in a separate email that “we essentially took off the battlefield the most potent weapon we had… younger healthy people, children, teens, young people who we needed to fastly [sic] infect themselves, spread it around, develop immunity, and help stop the spread.”

In another July 24 email of which Politico did not name the recipients, Alexander made clear that he knew relaxing social distancing restrictions would cause a rise in cases.

A DHHS spokesperson told Politico that Alexander’s demands for herd immunity had no influence on department strategy, and a senior administration official told the outlet, “His rants had zero impact on policy and communications. Caputo enabled him to opine, but people pushed back and it even got to a point where Caputo told him to stop sending the emails.”

However, Kyle McGowan, who at the time was CDC chief of staff, told Politico, “It was understood that he [Alexander] spoke for Michael Caputo, who spoke for the White House.”

RELATED CONTENT: America’s Role as the Core of Global Imperialism is Why It’s Being Hit by COVID-19 the Hardest

Indeed, Alexander did more than just shout into the void: in September, he successfully pressured the CDC to alter the title of a scientific report on the pediatric death rate of COVID-19, concealing its effects on school-age groups.

For example, the September 15 report’s title saw the words “children, adolescents, and young adults” dropped from the headline and replaced with the word “persons,” which conveys no information about the age group studied. The word “pediatric,” used in the medical field to refer to subjects under 21 years of age, was removed entirely, according to Politico.

His ideas also clearly held sway with leading administration figures. On July 8, Trump began putting intense pressure on top public health experts to relax their recommendations for how US schools could safely reopen without causing COVID-19 to spread.

Denouncing the CDC’s “very tough and expensive guidelines for opening schools,” Trump tweeted, “While they want them open, they are asking schools to do very impractical things. I will be meeting with them!!!”

I disagree with @CDCgov on their very tough & expensive guidelines for opening schools. While they want them open, they are asking schools to do very impractical things. I will be meeting with them!!!

​That same day, the US Secretary of Education, Betsy DeVos, who threatened to withhold federal funding from schools that refused to fully reopen, told Fox News’ Tucker Carlson that “There is no excuse for schools not to reopen again and for kids to be able to learn again full time. The data doesn’t suggest anything different.” She noted a recent DoE-funded report that she claimed supported her statement.

Just hours after Trump’s tweet, US Vice President Mike Pence told reporters at a press conference that the CDC would issue new recommendations the following week. In fact, it was two weeks later: on July 24, the same day Alexander shot off emails across Washington urging allowing children to become COVID-19 vectors, that the CDC dramatically reversed its recommendations, saying that schools must reopen in the fall semester.

“Reopening schools creates opportunity to invest in the education, well-being, and future of one of America’s greatest assets—our children—while taking every precaution to protect students, teachers, staff and all their families,” the new CDC statement read—an almost direct parroting of the DeVos statement and in direct contradiction to previous CDC recommendations that schools be ready to totally close for several days at a time if even a single case was detected among students or staff.

In the United States, public schools typically end their summer break in the last week of August or the first week of September, and after the jockeying over safety rules, many state schools opened their doors more or less on time, although many others enacted either partial reopenings or elected to have kids stay home and perform their first school semesters remotely.

According to CDC data, the US hit its lowest seven-day moving average for daily new COVID-19 cases since June on September 13: 35,477 cases. After that, new cases sharply rose, and, on December 15, the seven-day average stood at a staggering 211,356 new cases each day.

A total of 16.5 million Americans have contracted the virus—10 million more than recorded on 1 September—and over 302,000 Americans have died in the pandemic to date.