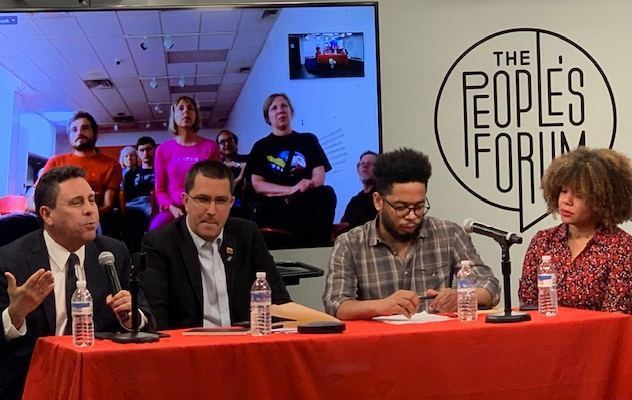 The embattled country’s top diplomat gave an inside view of U.S. imperialism’s campaign to overthrow the Bolivarian Revolution and turn Venezuela back to being a Rockefeller-Big Oil colony.

RELATED CONTENT: Arresting Members of the Embassy Protection Collective Would Be Unlawful

In the first meeting, Abrams arrogantly told Arreaza that Venezuela’s government would be overthrown in a coup. That’s what the CIA did to Chile’s democratically elected president, Salvador Allende, on Sept. 11, 1973. Thousands were tortured to death in the years that followed.

In their second meeting, Abrams admitted that the coup hadn’t happened but predicted Venezuela will be crushed by Washington’s economic blockade.

Arreaza told the audience that the Center for Economic and Policy Research had just released a report saying that at least 40,000 people in Venezuela have died because of the U.S. economic sanctions.

Venezuelan bank deposits containing billions of dollars and euros have been frozen from Portugal to Japan to CitiBank in New York. Tory Prime Minister Theresa May has seized more than a billion dollars worth of Venezuela’s gold deposited in Britain.

Including CITGO assets, the total amount stolen from Venezuela runs to $30 billion.

All this money could pay for needed food and medicines. Instead, many people are suffering and some are dying because of U.S. sanctions. The capitalist media then point to besieged Venezuela and call it a “failure of socialism.”

The foreign minister described the plight of 26 Venezuelans undergoing bone marrow treatment in Italy. Because of the Bolivarian Revolution, people have a right to free medical care, including life-saving treatments in foreign medical centers.

But the money that was to pay the Italian hospital was frozen because of sanctions. The patients and their families are worried that they will be kicked out, and they will be left to die.

Venezuela’s elected government is now trying to work with nongovernmental organizations to pay the bills.

Why doesn’t the U.S. puppet Juan Guaidó, who claims to be Venezuela’s president, intervene on these patients’ behalf?

Making an offer they can’t refuse

Hand-in-hand with U.S. sanctions is the diplomatic warfare being waged by Washington. Arreaza described how countries are threatened if they don’t recognize Guaidó. Money from the World Bank and the International Monetary Fund is being used as bribes.

Despite these strong-arm tactics, of the 55 countries belonging to the African Union, only the reactionary Moroccan monarchy supports the phony Guaidó.

Samuel Moncada, Venezuela’s ambassador to the U.N., also spoke. He and his staff haven’t been paid for six months because of sanctions.

Moncada pointed out Washington’s hand in the electrical outages that have plagued Venezuelans. Florida Sen. Marco Rubio’s tweets betrayed foreknowledge of these outages.

The courageous activists defending Venezuela’s Embassy in Washington, D.C., were skyped into the meeting.

Manolo De Los Santos announced that a meeting will be held on May 3 at The People’s Forum to organize a U.S. Hands Off Venezuela committee.

The very next day, the U.S. Treasury Department added the diplomat to its sanctions list.