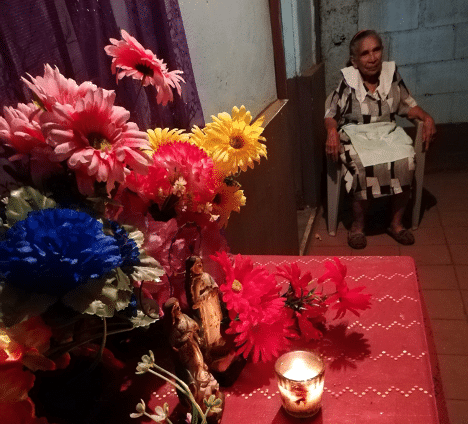 “I’m Catholic. I still pray in my house every day. I just don’t go to mass anymore.”

We’re sitting in a swept dirt yard outside of Managua talking with community leaders when the topic veers suddenly to Nicaragua’s Catholic priests.

“I didn’t hear this from somebody else, I saw it with my own eyes,” says Marisol,* a no-nonsense woman in her sixties. The fervor of the words pouring out demonstrates the depth of emotions: her hurt, and her anger.

“I couldn’t believe it. But there was my parish priest, standing in the back of a pickup truck with a megaphone, encouraging a group of people to burn the Sandinista party headquarters. I stepped back into the shadows so he wouldn’t see me, but I saw him.”

Marisol is referring to events that took place on Saturday, 21 April 2018, in Ciudad Sandino, a city of 180,000 just outside Managua. A few days earlier in the capital, protests had begun; protests ostensibly against proposed reforms to the social security system. It quickly became obvious, however, that the protests were about something else: an attempt to overthrow the democratically-elected Sandinista government.

After burning the FSLN party headquarters that day, the priest and his people went on to the city’s social security (INSS) building. It was the first INSS office in Ciudad Sandino, having been finished only a few months before: a multistory building with air conditioning, equipped with modern furniture and stocked with powdered milk which is given free to new mothers during their babies’ first months.

RELATED CONTENT: Climate Change and Nicaragua: Who Will Pay for the Damage?

“They were supposedly protesting on behalf of the old people, but if that’s true, why did they loot our INSS?” Asks Marisol. “I say ‘ours’ because I’m retired, I have a small pension, and that INSS building belongs to all of us retired people. It was brand new, and they broke in and destroyed it. They took everything…. Can you imagine? So if they were protesting to support us, why would they ruin our building?”

She raises one finger defiantly, eyes blazing, “I would expect anything from a politician, but not from a priest.”

Marisol is not the only devout Nicaraguan Catholic eschewing mass and the Church these days – far from it. She and her neighbors say that the same four or five people are the only ones showing up for Sunday mass. I’ve talked to Catholics of all political backgrounds who haven’t been to mass since April 2018, and while they continue celebrating their sacraments and Holy Days, they aren’t celebrating within the Church. My daughters are 14 and 16, and although we have attended many quinceaños (the important 15th birthdays, usually celebrated by Catholics with a special Church mass) in the past three years, not one of them has been celebrated in the Church.

“We don’t yet know where we’ll have it,” a friend tells me as she’s inviting me to her daughter’s baptism on her first birthday. “I mean, I’m Catholic, but I’m just not in agreement with the priests, and the…situation…with the Church.” She says, waving her hands expansively as if to encompass the whole complicated state of affairs.

The “situation” began with the INSS protests nearly four years ago. After false reports that students were killed by police on April 18, the protests turned violent and the next day three people were killed – a police officer, a Sandinista supporter and a bystander.

Although the government rescinded its proposed reforms to the INSS system, protests continued and the opposition demanded that police be taken off the streets. With no police presence, armed opposition groups quickly set up hundreds of roadblocks which paralyzed the country and became epicenters of violence. The roadblocks lasted for nearly three months, some 253 people were killed, and many more injured. The economy was crippled – 250 buildings were burned down or ransacked, public sector property losses were over $230 million, and 300,000 jobs were lost; all of which was catastrophic for Nicaragua.

The opposition and its media apparatus blamed the government for the violence, but police and Sandinistas were specific targets of the violence – more than two dozen police officers were killed – and now ongoing investigations are showing who was funding this violence in Nicaragua: the U.S. government through USAID, NED, IRI – all “soft arms” of the CIA.

Although the U.S. was funding the attempted ousting of Nicaragua’s democratically elected Sandinista government, the Catholic Church hierarchy in Nicaragua was instigating it. While the Bishop’s conference was ostensibly “mediating” a national dialogue, its own priests were calling for violence. At these “roadblocks of death,” as they came to be known, Sandinista supporters were identified, beaten, raped, tortured and murdered – with priests watching and sometimes participating in the violence.

A video taken in León shows Catholic priest Father Berrios and evangelical pastor Carlos Figueroa present and doing nothing to stop torture of a young Sandinista, Sander Francisco Bonilla Zapata, which included dousing him with gasoline. One of them can be heard saying, “Take the photo but don’t post it.”

Masaya parish priest Harvin Padilla directed the terrorist gang that tortured police officer Gabriel de Jesus Vado Ruiz and set him on fire while he was still alive. Messages to the terrorists were found on his phone, identifying himself and saying, “Hide these *$%, even in the bottom of a latrine…try to get people not to upload photos and videos to Facebook of the one you are burning, so there won’t be a problem.”

In Diriamba, a young Sandinista man was tortured for three days inside the Basilica de San Sebastian there. He described how he was beaten frequently by Father César Castillo, and how snipers shot at Sandinistas from the church tower.  When he told his story, the people of Diriamba stormed the church and found weapons stored inside, as well as supplies that had been stolen from a nearby health center. The angry parishioners demanded that the priest turn the church over to the community, chanting, “Take out the weapons; the Father must leave; we want the church.” (Voz de Sandino July 9, 2018)

After being ordered to stay in their stations in April and May, in late June and early July 2018, the Nicaraguan police went back onto the streets and managed to remove the roadblocks. Police arrival in each city was treated as a liberation by the people, who had effectively been held hostage for months by the thugs running the “road blocks of death.”

The most prominent and vociferously anti-Sandinista member of the clergy in Nicaragua was Auxiliary Bishop of the Archdiocese of Managua, Monsignor Silvio Baez. In October of 2018, Baez met with a group of peasants in an attempt to rekindle the violence. Recordings of the meeting were leaked by the Saint Paul Apostle Christian Base Community – a lay Catholic group rooted in liberation theology. In the recordings – which he later admitted to – Monsignor Baez implied that the violent roadblocks were the Church’s idea, he acknowledged that the bishops opposed the government, that they had alliances with drug traffickers and criminal organizations, and that they were plotting a second wave of violence to “get rid of” the FSLN. Speaking about President Daniel Ortega, Baez said, “We have every desire to take him before a firing squad.”

After leaking the recordings, the Saint Paul Apostle Community collected 586,000 signatures from Nicaraguans on a petition which was sent to the Pope to request the removal of Baez for his role in supporting the attempted coup and his continued hate speech and calls for violence. In April 2019, Pope Francis recalled Baez to Rome. After Rome, Baez went to Miami and remains close to opposition groups there that continue to plot the overthrow of the Nicaraguan government.

Meanwhile, in Nicaragua, Catholics continue to feel at odds with Church leadership.

“Despite all the problems, I kept going to mass for a while,” Rosa, a small business owner from the urban center of Ciudad Sandino tells me. “About a year later we were at a procession for Holy Week. As we were preparing to leave the church, the priest pulled out a Nicaraguan flag and flew it upside down. I was absolutely shocked at that. But I told my family, ‘Let’s just keep going and get through this procession.’” A few blocks down the street the priest started shouting opposition political slogans, trying to get the parishioners to take up the chant.

“I told my family, ‘No, that’s it. We’re done,’” says Rosa. “We walked away from that procession and we haven’t been to mass since.”

This week is the Feast of the Immaculate Conception, Purisima, Nicaragua’s biggest holiday. Catholics celebrate the conception of Mary without original sin in order to be the mother of Jesus by setting up altars to the Virgin Mary in their homes and lighting fireworks. Neighbors come to sing to the Virgin and the singers are given candies, fruit, toys, food, and household items. In Ciudad Sandino there are traditionally more than 7,500 altars set up around the city. Rosa’s mother is devoted to the Virgin Mary and always has an elaborate altar on her porch; she receives 5,000 visitors each year, most from Ciudad Sandino’s poorest neighborhoods.

In Managua, tens of thousands of the faithful have been turning out each night to see the government-sponsored altars in the city center. Back in her yard outside the city, Marisol tells us she will still celebrate Purisima as usual.

“I still have my faith, I will still put up my altar to the Virgin.” We ask Marisol another question.

“We’ve heard so much about repression in Nicaragua. So how are these priests being punished for their violent actions?” Everyone in the yard laughs.

“They’re not being punished at all!” Says Marisol. Jairo, a quiet older man who is a member of an opposition party speaks up.

*Names have been changed.

Becca Renk is part of the Jubilee House Community and its project in Ciudad Sandino, the Center for Development in Central America and has lived in Nicaragua since 2001.

Featured image:  In early December there are traditionally more than 7,500 altars to the Virgin Mary set up around the city of Ciudad Sandino for the Feast of the Immaculate Conception.