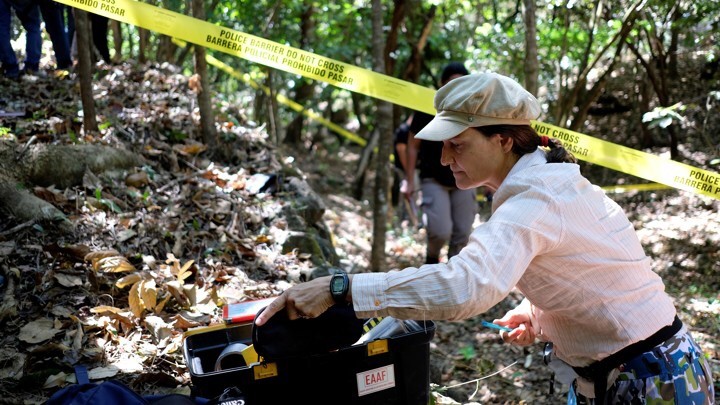 Inadvertently, Ilhan Omar revealed that Trump may have picked the right man to implement his policy in Venezuela.

In a testy exchange with Elliott Abrams on Wednesday, Representative Ilhan Omar resurrected the memory of El Salvador’s El Mozote massacre, one of the worst mass killings in modern Latin American history. Omar, a Democrat from Minnesota, was all of two months old when the December 1981 massacre took place. Abrams, President Donald Trump’s new special envoy for Venezuela, was a senior State Department official in the Reagan administration, which was sending military and economic aid into El Salvador to defeat a leftist insurgency and stop what it saw as a wave of communism approaching the United States.

What happened in 1981? And what did Abrams have to do with it?

More than 900 peasants were murdered in and around several villages in the eastern province of Morazán. Most were old men, women, and children. At the Roman Catholic church in El Mozote, soldiers separated men from their families, took them away, and shot them. They herded mothers and children into the convent. Putting their American-supplied M-16 rifles on automatic, the soldiers opened fire. Then they burned the convent. Some 140 children were killed, including toddlers. Average age: 6.

Omar’s questioning of Abrams was not artful, and Abrams wasn’t unreasonable in viewing it as a personal attack. But she was right to suggest that he had sought to diminish or even cover up the massacre by calling it communist propaganda. Nor was she wrong to question whether Abrams was ethically qualified to assume a high government position, with the mission to oust the Venezuelan dictatorship and promote democracy.

In El Salvador, the Reagan administration, with Abrams as point man, routinely defended the Salvadoran government in the face of evidence that its regular army, and allied right-wing death squads, were operating with impunity, killing peasants, students, union leaders, and anyone considered anti-government or pro-guerrilla. Abrams went so far as to defend one of the death squads’ most notorious leaders, Roberto D’Aubuisson, who was responsible for the murder of Archbishop Óscar Romero while he was saying Mass, in March 1980.

It was Romero’s assassination that touched off a civil war in El Salvador—an alliance of the military and the oligarchs, which had ruled for decades with support from the United States, against a Marxist-inspired insurgency. Most of the support for the revolution came from El Salvador’s peasants, who had little to lose in seeking to overthrow a government that had resorted to brutal repression to keep them in miserable poverty.

To drain the peasant sea in which guerrillas swam, to borrow from Mao, the Atlacatl Battalion, whose officers had recently completed counterinsurgency training in the United States, launched a “scorched earth” operation in Morazon, a mountainous region where semiliterate peasants labored on their small plots of sisal and corn.

I began reporting from El Salvador for The New York Times in December 1980. Four American Roman Catholic churchwomen had just been raped and murdered by Salvadoran soldiers, another heinous crime that the Reagan administration sought to cover up. One year later, I was smuggled by guerrillas into Morazon. I was accompanied by Susan Meiselas, the photojournalist already well known for her work in Nicaragua. Simultaneously, but separately, Alma Guillermoprieto of The Washington Post made her way into the area as well.

When we reached El Mozote, evidence of the massacre was still abundant. Skeletons were being picked over by vultures, the stench of death carried by the breeze.

My reporting and Susan’s pictures appeared in the Times, and Alma’s reporting in the Post, in January 1982. Immediately, the administration attacked us and sought to deny the stories, calling them guerrilla propaganda. The reports were not credible, Abrams said. As Abrams put it, El Mozote “appears to be an incident that is at least being significantly misused, at the very best, by the guerrillas.” So the murder of hundreds of children became a mere “incident.”

I returned to el mozote last year, the first time since the 1980s. I found a survivor, Amadeo Sanchez. He was 8 years old at the time of the massacre, a peasant boy who worked in the fields with his father. When word of the Atlacatl’s operation reached his village, the gunfire close enough to be heard and the helicopter gunships overhead, Sanchez told me he fled with his father. His mother remained in the village, with Sanchez’s three younger siblings, including a year-old brother. “I have done nothing wrong. Nothing is going to happen to me,” Sanchez recalled his mother saying.

From their hiding place amid rocks and weeds, Sanchez said he saw soldiers going house to house. In one house, they dragged out two teenage girls and led them to the river, Sanchez told me. Sanchez couldn’t see them, but he heard them screaming for their mothers: “Mom, they’re raping me.” Then he heard gunshots. All was silent.

A day or two later, after the soldiers had left, Sanchez and his father returned to the village. Sanchez said he found his mother and siblings dead. In one house, he said, he saw a woman, Mario Santos. In her bed. She had been shot in the forehead. Next to her was her daughter. One day old. Stabbed in the throat. On the wall, the soldiers had scrawled in blood, Un nino muerto, un guerrillero menos: “One dead child is one less guerrilla.”

(Sanchez also gave this testimony under oath to a judge who is now conducting a trial of some 18 military officers who are charged with the massacre.)

Omar didn’t have Sanchez’s testimony, but she would have been more effective in questioning Abrams if she had read from the United Nations Truth Commission report on the human-rights abuses in El Salvador during the civil war, which was released in 1993. Relying on classified U.S. government documents made available to the commission, as well as scores of interviews, the commission wrote:

On 10 December 1981, in the village of El Mozote in the Department of Morazán, units of the Atlacatl Battalion detained, without resistance, all the men, women and children who were in the place. The following day, 11 December, after spending the night locked in their homes, they were deliberately and systematically executed in groups. First, the men were tortured and executed, then the women were executed and, lastly, the children, in the place where they had been locked up.

Even if Omar had read that to Abrams and asked for his reaction, she probably would not have gotten a straight answer. Abrams is practiced at dissembling before Congress.

In 1982, in an appearance before the Senate Foreign Relations Committee, Abrams was asked by Senator Paul Tsongas whether he thought Roberto D’Aubuisson “would fit the extreme on the right.”

“So, you’d have to be to the right of D’Aubuisson to be considered extremist?” Tsongas asked.

“You’d have to be engaged in murder,” Abrams responded.

D’Aubuisson was engaged in murder, as Abrams should have known.

A few months after the Romero killing, a Salvadoran soldier had gone to the American embassy and told a young political officer, Carl Gettinger, that D’Aubuisson had presided over a meeting at which the assassination was plotted and soldiers had drawn straws to see who would carry it out. This had been duly reported to Washington, and other intelligence placed D’Aubuisson “at the center” of death-squad activity, as a senior diplomat in El Salvador put it at the time. In this period, El Salvador was the top foreign-policy issue, and Abrams was a senior State Department official.

The evidence that D’Aubuisson had been complicit in the murder of Archbishop Romero, that there had been a meeting to draw straws, was “credible,” the CIA later concluded. “While any number of rightwing death squads could have planned and carried out what was a relatively simple execution … there probably were few so fanatical and daring as D’Aubuisson to do it.”

Inadvertently, Omar revealed that Trump may have picked the right man to implement his policy in Venezuela. As his record in El Salvador suggests, Abrams will say whatever is necessary to accomplish the administration’s will.

RAYMOND BONNER, a former New York Times foreign correspondent, is the author of Weakness and Deceit: America and El Salvador’s Dirty War. He is currently at work on a documentary about the El Mozote massacre for RetroReport.